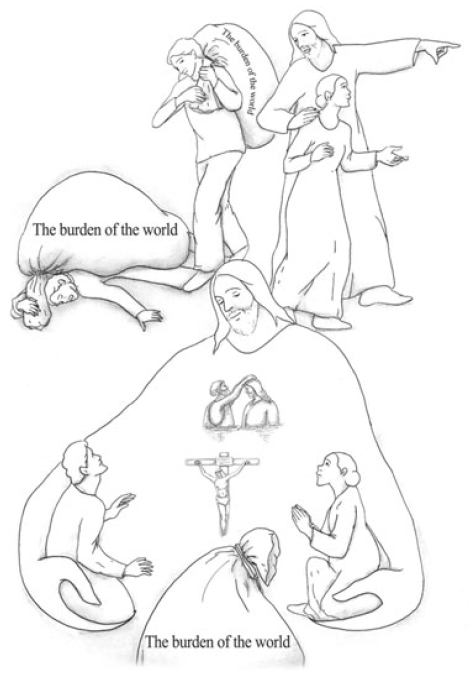 Cain Moved Further away from God

Children of Cain Became Carnal in the End

The Love of God Wanting to Save Even Cain

The Gospel of the Water and the Spirit Is Like This

What Is the Good and Evil That God Speaks of?

“And in the process of time it came to pass that Cain brought an offering of the fruit of the ground to the LORD. Abel also brought of the firstborn of his flock and of their fat. And the LORD respected Abel and his offering, but He did not respect Cain and his offering. And Cain was very angry, and his countenance fell” (Genesis 4:3-5).
When people go before God they bring the fruit of the ground or things that have been given by God. If anyone should try to go before God with their own deeds or righteousness, they will surely be cursed. God did not respect Cain and his sacrifice. Thus, Cain became angry, so much so that his countenance fell. Why did Cain become angry to the point where his countenance fell? He was angry because he thought, “I did so well, and I have done no wrong. Yet, why didn’t God accept my sacrifice? Surely, I offered sacrifice much better than Abel.” He was saying that he was right and God was wrong. That is why he was angry.
But God said, “Why are you angry? And why has your countenance fallen? If you do well, will you not be accepted? And if you do not do well, sin lies at the door.” Here, God speaks of good. What would be the true good that we could carry out before God? It would be having faith in the work of God, the fact that Jesus Christ, who is the Firstborn of sheep, has blotted out all our sins. The good work is to believe in our hearts all the works of the righteousness God has done to save us by coming to this earth, receiving the baptism by which He took on all our sins, dying on the Cross to pay for the wages of those sins, and resurrecting from the dead. It is our most virtuous deed to have faith in the work in itself that Jesus, who is God, had done by coming to this earth in human flesh. Furthermore, God did all those works in order to save us, but for us to ignore the work that God had done instead of believing in it is evil. Good is not offering lots of things before God; but rather, the true good is having faith in the works that Jesus had done to save us.
Human beings, who have gained their own standards for what is good and what is evil by having eaten the fruit from the tree of the knowledge of good and evil, discern good and evil with their own relative standards. However, for all human beings coming down from their sinful and corrupt ancestor Adam, there is no fundamental good in actuality. That is why even the Bible says, “As it is written:
‘There is none righteous, no, not one;
There is none who understands;
There is none who seeks after God.
They have all turned aside;
They have together become unprofitable;
There is none who does good, no, not one’” (Romans 3:10-12).
The standards of good and evil in a human society change with societies and time. It means that a virtue in a certain society is a vice in another. Thus, what it means is that such virtues are something relative and not based on the Word of the Truth.
Only God is good. That is why our true virtue lies in accepting the work that God had done. God the Father sent us His only begotten Son in order to save us. And, He passed over all our sins to that Son. Then, by passing the judgment on the Son instead of passing the judgment on us, He has blotted out all our sins and saved us. And so, God the Father has saved us through His Son. Therefore, for us to take into our hearts the work that the Son of God had done is to carry out virtue before God. That is what good is.
Genuine virtue isn’t doing lots of good deeds and it isn’t serving God well in our own way. Rather, completely accepting the work that God had done for us, that is, the fact that God has saved us, is in turn retuning the grace of God, as well as doing good before God. Do you understand the concept of good and evil? Here, God clearly tells us the concept of good and evil. What is true good? The fact is that getting saved by accepting the work of salvation God had done in its entirety, that is, accepting the love of God, is what good is.

What Is the Proper Faith?

“If You Do Well, Will You Not Be Accepted?”