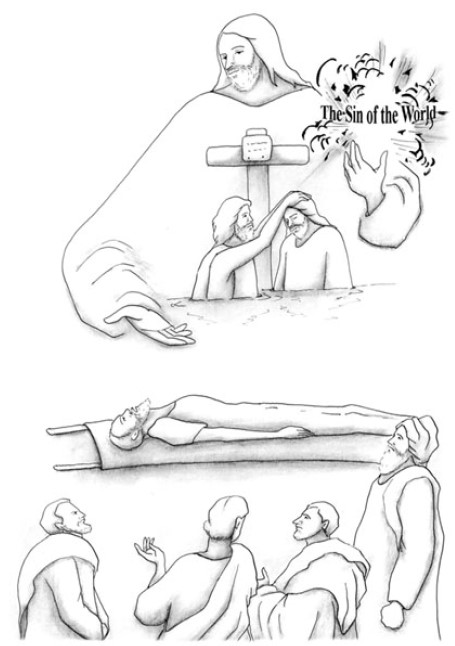 (Luke 22:7-38)
“Then came the Day of Unleavened Bread, when the Passover must be killed. And He sent Peter and John, saying, ‘Go and prepare the Passover for us, that we may eat.’ So they said to Him, ‘Where do You want us to prepare?’ And He said to them, ‘Behold, when you have entered the city, a man will meet you carrying a pitcher of water; follow him into the house which he enters. Then you shall say to the master of the house, ‘The Teacher says to you, ‘Where is the guest room where I may eat the Passover with My disciples?’’ Then he will show you a large, furnished upper room; there make ready.’ So they went and found it just as He had said to them, and they prepared the Passover. When the hour had come, He sat down, and the twelve apostles with Him. Then He said to them, ‘With fervent desire I have desired to eat this Passover with you before I suffer; for I say to you, I will no longer eat of it until it is fulfilled in the kingdom of God.’ Then He took the cup, and gave thanks, and said, ‘Take this and divide it among yourselves; for I say to you, I will not drink of the fruit of the vine until the kingdom of God comes.’ And He took bread, gave thanks and broke it, and gave it to them, saying, ‘This is My body which is given for you; do this in remembrance of Me.’ Likewise He also took the cup after supper, saying, ‘This cup is the new covenant in My blood, which is shed for you. But behold, the hand of My betrayer is with Me on the table. And truly the Son of Man goes as it has been determined, but woe to that man by whom He is betrayed!’ Then they began to question among themselves, which of them it was who would do this thing. Now there was also a dispute among them, as to which of them should be considered the greatest. And He said to them, ‘The kings of the Gentiles exercise lordship over them, and those who exercise authority over them are called ‘benefactors.’ But not so among you; on the contrary, he who is greatest among you, let him be as the younger, and he who governs as he who serves. For who is greater, he who sits at the table, or he who serves? Is it not he who sits at the table? Yet I am among you as the One who serves. But you are those who have continued with Me in My trials. And I bestow upon you a kingdom, just as My Father bestowed one upon Me, that you may eat and drink at My table in My kingdom, and sit on thrones judging the twelve tribes of Israel.’ And the Lord said, ‘Simon, Simon! Indeed, Satan has asked for you, that he may sift you as wheat. But I have prayed for you, that your faith should not fail; and when you have returned to Me, strengthen your brethren.’ But he said to Him, ‘Lord, I am ready to go with You, both to prison and to death.’ Then He said, ‘I tell you, Peter, the rooster shall not crow this day before you will deny three times that you know Me.’ And He said to them, ‘When I sent you without money bag, knapsack, and sandals, did you lack anything?’ So they said, ‘Nothing.’ Then He said to them, ‘But now, he who has a money bag, let him take it, and likewise a knapsack; and he who has no sword, let him sell his garment and buy one. For I say to you that this which is written must still be accomplished in Me: ‘And He was numbered with the transgressors.’ For the things concerning Me have an end.’ So they said, ‘Lord, look, here are two swords.’ And He said to them, ‘It is enough.’”

What Kind of God Is Jesus?

All of us must always pray to God because we are beings that can live properly in this world only with the help of God. I believe God will certainly help us whenever we pray to God for one another and share difficult matters with one another amid hardship. It is because God is our Father God, and because He always hears our prayers of request. Let’s all pray always with the faith that believes the Lord definitely answers our prayers. Let’s live this world blessedly with such faith.
Do you pray fervently? Prayer is a method of seeking help from God concerning our problems. However, the people who do not have faith cannot go to God with faith and seek help for difficult problems they have. You must first have faith in order to pray to the Lord, but if you think your own faith is lacking, seek help from other saints in the Church. You can pray better if you pray along with people who have faith. Even if a saint has a faith the size of mustard seed, God hears the prayer and helps when the saint joins his heart together with another as I have said now and seek the resolution of the problem in prayer to God. Therefore, why do you worry when you can witness the power of God if you pray to God like that?
When we read the Book of Job, we can see even Satan the Devil seeking the permission of the Lord, “Would it be okay for me to harass Job? Would he revere God without any reason? Should I get rid of his wealth?” We cannot say such seeking by Satan the Devil is really a prayer, but I think it is kind of a prayer since he did seek to God like that. When we look at the Word here, the Lord said to Peter, “Satan has asked for you, that he may sift you as wheat.” It means that Satan the Devil asked God, “Should I shake up Simon and see whether he believes in God or not?” Generally, God agrees to let such things be done. Even though it is the prayer of Satan the Devil, He allows such things. He says, “Go ahead and do as you want.”
What would happen if Satan the Devil tempted people like that? People would fall for such temptation as many persimmons fall when you shake a persimmon tree. That is why the Lord told His disciples, “Pray to God so that you may not fall into temptation.” As such, you and I must always pray to God whenever we face difficult situations. We ourselves must pray first individually, and then pray together with those who are ahead of us in faith. Then we must pray through the meetings in each group. We will experience the living God through our prayer of faith.
Healing the sick is not the only way to manifest the power of God. Praying to God and seeking God’s help in our daily lives and receiving the resolution of problems through God’s help is the true experience of God’s power and the answer to the prayer. Actually, it is true that busy people cannot pray faithfully. Even so, we must pray individually like this, pray together, pray for the brothers and sisters who are facing hardship, pray for the workers of God, pray for the preaching of the gospel, and seek God’s help in all things like that as we live in this world.
We can title the Word that we have read together as “Jesus Knows Everything Because He is God, Not a Human.” We will share lessons from today’s Scripture passage in relation to this title and learn the divine nature and the power of Jesus.
Before Jesus died on the Cross, the Passover season of Israel was near. At that time, Jesus told His disciples to prepare for a Passover table for Him to get together with them. However, because the Lord was God Almighty and knew all things, He said, “Behold, when you have entered the city, a man will meet you carrying a pitcher of water; follow him into the house which he enters. Then you shall say to the master of the house, ‘The Teacher says to you, ‘Where is the guest room where I may eat the Passover with My disciples?’’ Then he will show you a large, furnished upper room; there make ready.”
The Lord wanted to have a communion with His disciples on the Passover season that commemorated Israel people’s escape from Egypt and liberation from slavery. He wanted to eat bread, drink wine, have supper together with them, and share the last Word with them. This Word means that the Lord knew all things that would occur in the future. There wasn’t anything that He did not know. That is why the Lord was able to say, “Behold, when you have entered the city, a man will meet you carrying a pitcher of water; follow him into the house which he enters.”

The Scriptures Say That Jesus Wants to Use Us

The Lord Then Spoke about the Kingdom of God