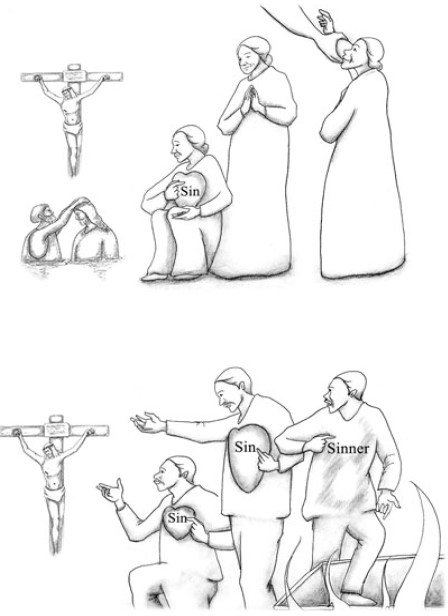 (Luke 24:36-53)
“Now as they said these things, Jesus Himself stood in the midst of them, and said to them, ‘Peace to you.’ But they were terrified and frightened, and supposed they had seen a spirit. And He said to them, ‘Why are you troubled? And why do doubts arise in your hearts? Behold My hands and My feet, that it is I Myself. Handle Me and see, for a spirit does not have flesh and bones as you see I have.’ When He had said this, He showed them His hands and His feet. But while they still did not believe for joy, and marveled, He said to them, ‘Have you any food here?’ So they gave Him a piece of a broiled fish and some honeycomb. And He took it and ate in their presence. Then He said to them, ‘These are the words which I spoke to you while I was still with you, that all things must be fulfilled which were written in the Law of Moses and the Prophets and the Psalms concerning Me.’ And He opened their understanding, that they might comprehend the Scriptures. Then He said to them, ‘Thus it is written, and thus it was necessary for the Christ to suffer and to rise from the dead the third day, and that repentance and remission of sins should be preached in His name to all nations, beginning at Jerusalem. And you are witnesses of these things. Behold, I send the Promise of My Father upon you; but tarry in the city of Jerusalem until you are endued with power from on high.’ And He led them out as far as Bethany, and He lifted up His hands and blessed them. Now it came to pass, while He blessed them, that He was parted from them and carried up into heaven. And they worshiped Him, and returned to Jerusalem with great joy, and were continually in the temple praising and blessing God. Amen.”
What Must We Think of?
How have you been, brothers and sisters? Easter is drawing near. I am preaching about Easter so early because I think it is beneficial for us to do everything before others. Also, I am preaching the Word from today’s Scripture passage because I think it is more beneficial for us to understand and believe the things the Lord had done when He came to this world and the things that will happen in the future, rather than being sad and fasting for the season of Lent is here.
The Word we have read today is the Word the Lord told the disciples after resurrecting from death. It speaks about the fact that Jesus Christ was resurrected from death on the third day, and that the gospel that made us attain the remission of sins through His name will be preached to all the nations starting from Jerusalem. The Lord witnessed His resurrection while having a meal with the disciples and made them understand the Scripture Word. After that, the Lord spoke the last Word, “Now, I will send you the Holy Spirit as the Father had promised,” and blessed the disciples and went up to the Kingdom of Heaven. Afterwards, the disciples of Jesus went to the Temple and praised God.
We have read such Words today. As we read this Scripture Word today, we must think whether we understand and believe this Scripture passage correctly.
Our Lord came to this world, took all the sins of the humankind by receiving the baptism, carried the sins of the world to the Cross, and was resurrected after dying on the Cross. Then, do you believe that the Lord really resurrected from death? Do you believe this Word exactly as it is? Not only this Word, but do you believe all the things our Lord has done and all the Words He has spoken as they are recorded in the Scriptures? Do you believe all the Words the Lord has spoken sharply like a deadly sword about the things that will happen to the humankind in the future and the things that are essential to us?
I am saying that we must think of such things. I know that we must think about such things like whether we really believe the Scripture Word or whether we just read it, whether we go to Church because we are bored or whether we go to Church because we really believe this Word. There is a great gap between a person who goes to Church believing in the Scripture Word and a person who just goes to Church without believing the Word.
I believe all the Word spoken in the Scriptures. So I also believe that our Lord who has ascended to Heaven will return in the end times. And I also believe that the world will fall into tribulation, that is, natural disasters. Because it is recorded in the Scriptures, I believe all the things that will happen in the end times, such as the world of stars shaking and earthquakes erupting and famine and sickness occurring everywhere in the world. I also believe our Lord came to this world as a human being through the body of Virgin Mary, and I also believe that He received the baptism from John the Baptist at the age of thirty and fulfilled all the righteousness. I also believe the Lord took all the sins of the world to be put to death on the Cross in our place, and I also believe He was resurrected from death to save us. I also believe the Lord ascended to Heaven because all such things are recorded in the Lord’s Word. It is very important to believe the Word like this as we live out our faith because believing in the Word is having faith in God.

I mean that we cannot become wise people if we consider God’s Word as the teachings of one religion, do not believe in the Word of Truth, and just think of it as human words. It means that we cannot receive wisdom if we do not really believe and follow God’s Word. The Bible is really a great treasure house of amazing wisdom. The Bible is the storage of the Truth, storage of life, storage of salvation, and the storage of blessing. God made it so everyone can look at His Word through the Bible.
Even so, many people do not believe in such Word of Truth although they read it. I want to say this to people who believe in Jesus: “You must first believe in this Word and then think of Jesus Christ.” Such difference in thinking decides the path of human life. Do you know why such things like falling into deep concerns, falling into worries, going bankrupt, going hungry, and living pitifully happen to people even though they clearly believe in Jesus? That’s because such people did not think of the work of Jesus Christ. The consequence is not good because they did not believe in God’s Word, because they did not think of God’s work.
However, when we believe in God’s Word and think of God, we can know exactly what’s going to happen in the world clearly as if we can know what will happen tomorrow by reading a newspaper that describes exactly the affairs of tomorrow. I want to tell you that your heart becomes wider, your spiritual eyes become open, ways to make money open, and gain the wisdom to go through all the difficulties if you think of the work of Jesus Christ first.

Do You, by Any Chance, Have Sin in Your Heart?

What Happened to the People Who Believe in Jesus with Such Objective?

However, the False Ministers Just Tell Their Congregation to Offer Money

Do You Know through What Faith the Holy Spirit Comes in You?