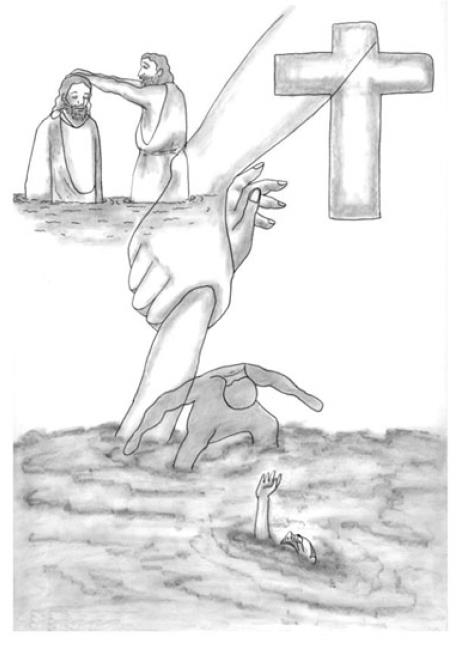 (John 13:1-11)
“Now before the Feast of the Passover, when Jesus knew that His hour had come that He should depart from this world to the Father, having loved His own who were in the world, He loved them to the end. And supper being ended, the devil having already put it into the heart of Judas Iscariot, Simon’s son, to betray Him, Jesus, knowing that the Father had given all things into His hands, and that He had come from God and was going to God, rose from supper and laid aside His garments, took a towel and girded Himself. After that, He poured water into a basin and began to wash the disciples’ feet, and to wipe them with the towel with which He was girded. Then He came to Simon Peter. And Peter said to Him, ‘Lord, are You washing my feet?’ Jesus answered and said to him, ‘What I am doing you do not understand now, but you will know after this.’ Peter said to Him, ‘You shall never wash my feet!’ Jesus answered him, ‘If I do not wash you, you have no part with Me.’ Simon Peter said to Him, ‘Lord, not my feet only, but also my hands and my head!’ Jesus said to him, ‘He who is bathed needs only to wash his feet, but is completely clean; and you are clean, but not all of you.’ For He knew who would betray Him; therefore He said, ‘You are not all clean.’”
I arrived a day earlier than planned, so I would like to take this opportunity to share with you John 3:1-11 from the Word of God which I had meant to do this past Thursday evening at the discipleship training camp, but didn’t have enough time. Here in today’s Scripture reading, we see Jesus washing His disciples’ feet. Jesus wanted to wash Peter’s feet and all the other disciples’ feet as well, but Peter refused at first. As written here Peter protested embarrassingly, asking how the Lord could wash his feet. From today’s Scripture reading, let’s find out how Peter was able to follow the Lord so faithfully.
Do You Love Me More Than These?
Last Thursday morning at the discipleship training camp I gave a sermon based on John chapter 21. When we turn to this passage we see the Lord saying to Peter, “Simon, son of Jonah, do you love Me more than these?” Peter then said to Him, “Yes Lord, you know that I love You.” “Feed My lambs,” said the Lord. He then asked Peter again, “Simon, son of Jonah, do you love Me?” “Yes Lord, you know that I love You,” answered Peter. “Tend My sheep.” The Lord asked the third time, “Simon, son of Jonah, do you love me?” Jesus was asking Peter the same question three times. But the third time Peter answered and said, “Lord, You know all things, and you know that I love You.” It’s to the resurrected Lord that Peter made this confession. From here onwards Peter would go on to work faithfully as a disciple of Jesus Christ and a servant of God, and the reason why he could do this is because the Lord had blotted out all the sins of his entire lifetime. It’s because the Lord Himself had borne all the sins of mankind including Peter’s sins when He was baptized by John the Baptist, had been crucified to death, had risen from the dead again, and had thereby become Peter’s Savior—including our Savior.
Peter could follow the Lord and fulfill his duties as an apostle because the Lord had already blotted out all his sins. Even though Peter had denied Jesus no less than three times, he was still able to follow the Lord, and the Lord permitted him to do so, because He had blotted out all his sins. If the Lord had not blotted out Peter’s sins once and for all—that is, if Jesus Christ had not borne all his sins when He was baptized by John the Baptist, and if He had not been condemned for these sins by being crucified—then Peter could not have followed Him. Nor could Peter have made such a confession when the resurrected Jesus appeared before him. He couldn’t have given the same answer three times to Jesus, saying, “You know that I love You.” When the Lord asked Him the third time, Peter said, “Lord, You know all things.” Peter could answer like this because even though he knew just how weak and inadequate he was, he also knew that the Lord had blotted out all his sins already.

Why Did Jesus Seek to Wash Peter’s Feet?

How Can We Follow the Lord When We Have So Many Shortcomings?