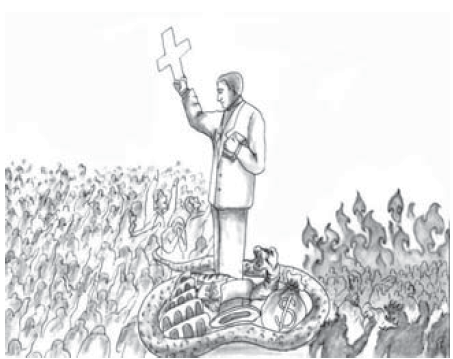 (Isaiah 28:13-14)
“But the word of the Lord was to them, ‘Precept upon precept, precept upon precept, line upon line, line upon line, here a little, there a little,’ that they might go and fall backward, and be broken and snared and caught. Therefore hear the word of the Lord, you scornful men, who rule this people who are in Jerusalem.”
BIBLICAL HERESY
How does the Bible define the word “heretic?”
The Bible defines a heretic as one who has sin in his heart even though he believes in Jesus.

There are many pseudo newswriters these days, especially in developing countries. They pretend to be newswriters but usually extort money from their victims, threatening to expose something their victims have done. The word pseudo means something that looks genuine but is not the real thing. In other words, it refers to something whose true self is completely different from its outside appearance.
The words “heretic” and “pseudo” are used quite often, especially in Christian churches.
There are few clear-cut definitions of what a heretic is and what it is to be termed “pseudo,” nor are there many who teach these concepts in strict accordance with the Bible.
Under these circumstances, I feel duty-bound to disclose what the Bible defines as “heresy” and shed some light on the subject. I also want to point out some examples of heresy in everyday life and thus allow us to think about it together. Anyone who believes in God has to think about heresy at least once in their lives.
Titus 3:10-11 defines a heretic as a divisive person who is warped and engaged in sinning, one being self-condemned. A heretic is someone who condemns himself as a sinner. Therefore those who believe in Jesus but have sin in their hearts are heretics before God.
Jesus took away all sins through His baptism. But heretics refuse to believe in the true gospel that brings salvation to sinners and thus condemn themselves to join the ranks of sinners.
Are you a heretic? We have to think about this if we want to live an upright and truly faithful life.
Are you not condemning yourself as a sinner even though you believe in Jesus if you have not yet heard the gospel of the water and the Spirit? If you consider yourself a sinner, then you are doing a disservice to Jesus by slighting His perfect salvation and the gospel of the water and the Spirit.
To call oneself a sinner before God is to admit that one is not a child of God. Those who confess to Jesus, “Lord, I am a sinner,” have to reconsider their own faith.
How can you believe in Jesus and still claim to be a sinner when Jesus took away all the sins of the world and saved you completely from eternal damnation? How can you deny His free gift of salvation and define yourself as a sinner when Jesus took away all your sins through His baptism and was judged thoroughly for them on the Cross?
Such people are heretics because they volunteer to be sinners apart from the word of God. You have to know the gospel of the water and the Spirit to avoid committing heresy before God.
Anyone who believes in Jesus but is not born again is a heretic because he still has sin in his heart.
Because God took away all the sins of the world including our own, we are heretics before God if we ignore this blessing of salvation. Because God is holy, we are heretics if we have sin in our hearts. If we really want to become righteous, we have to believe in the gospel of the baptism of Jesus and His blood on the Cross.
THE ORIGIN OF HERESY IN THE BIBLE
What is the most important qualification for a priest?
He has to be born again.

Let’s look at 1 Kings 12:25-26. “Then Jeroboam built Shechem in the mountains of Ephraim, and dwelt there. Also he went out from there and built Penuel. And Jeroboam said in his heart, ‘Now the kingdom may return to the house of David.’” Jeroboam was one of Solomon’s subordinates. When Solomon became corrupt in his later years, Jeroboam rebelled against the king, and later he became the king of the ten tribes of Israel in the time of Rehoboam, the son of Solomon.
Jeroboam’s first concern when he became king of Israel was that his people might return to Judah where there was the temple.
Therefore, he came up with an idea to prevent this from happening. He made two golden calves in Bethel and Dan and commanded his people to worship them. 1 Kings 12:28 says, “Therefore the king asked advice, made two calves of gold.” One he set up in Bethel, and the other in Dan and told his people to worship them, despite the fact doing so was a terrible sin. He even arbitrarily appointed priests to lead the worship.
“After this event Jeroboam did not turn from his evil way, but again he made priests from every class of people for the high places; whoever wished, he consecrated him, and he became one of the priests of the high places” (1 Kings 13:33). That is the origin of heresy.
Even now, heretics appoint to the priesthood anyone who volunteers to do the work of God. Anyone who graduates from a theological seminary can become a minister, an evangelist, a missionary and elder even if he is not born again of water and the Spirit.
How can someone who is not born again become a minister? If such a person is appointed as a priest, the church that elects him becomes a factory for the production of heretics.
Let us think again about the origin of heresy. First, Jeroboam substituted golden calves for God in order to maintain his political power. Second, he consecrated anyone who volunteered to become a priest. In other words, he consecrated ordinary people as priests. The same practice continues even now.
The history of heresy continued on well after the time of Jeroboam. Those who are not born again of water and the Spirit should never be allowed to become priests.
Can anyone who only graduates from a theological seminary become a minister or an evangelist? Is it correct for them to serve God despite the fact they have not been approved by God? Never. Only those who have been acknowledged by God should be allowed to become His servants. Those who are acknowledged by God are those who are born again of water and the Spirit.
It is recorded in 1 Kings 12:25-26 and 1 Kings chapter 13 that the sin of Jeroboam provoked the wrath of God. We should all know this story, and if someone is not familiar with it, he should go back to the Bible and find out.
Think again if you are substituting golden calves for God in your ministry. Do you, by any chance, put emphasis on earthly blessings lest your followers may return to the gospel of being born again of water and the Spirit?
Do you tell your followers that they can be cured of disease if they believe in Jesus? Do you tell them that they will be blessed in wealth? Do you appoint those who are not born again to be ministers or staff members of your church and claim that your denomination is the only orthodox one? If so, you are committing the sin of Jeroboam before God and provoking His wrath.

Even today, there are so many heretics who worship golden calves. They say that God blessed Solomon when he offered a thousand burnt offerings to God. I Kings 3:3-5 says, “And Solomon loved the Lord, walking in the statutes of his father David, except that he sacrificed and burned incense at the high places. Now the king went to Gibeon to sacrifice there, for that was the great high place: Solomon offered a thousand burnt offerings on that altar. At Gibeon the Lord appeared to Solomon in a dream by night; and God said, ‘Ask! What shall I give you?’”
They swindle money out of their followers under the fraudulent promise of “a thousand burnt offerings of Solomon.” Those foolish followers are extorted of their money. And those who worship golden calves as their God are deprived of their money, which is used as contributions to build tremendous church buildings. It is not because their churches are too small, but because they want to extort money from their followers.
Setting up golden calves for their congregations to worship was only an excuse heretics came up with to extort money from them. We who believe in God should never be taken for fools. If you offer your money in worship of golden calves, it is not offered to God, but ends up in the pockets of pseudo-priests who are full of greed like Jeroboam. You should never fall into the traps of such heretics.
Then why was God pleased with the thousand burnt offerings of Solomon? Because Solomon knew his own sins, acknowledged that he had to die for them and offered sacrifices in accordance with the faith. He offered a thousand burnt offerings in gratitude for the salvation of God. Solomon offered a thousand burnt offerings every day, thinking of the redemption of the water and the Spirit.
Now, you should remember the true meaning of heresy so that you will never be deceived by pseudo priests.

THOSE WHO MINISTER WITHOUT BEING BORN AGAIN ARE HERETICS

THE JUDGMENT OF GOD AWAITS HERETICS