[8-7] The Beautiful Gospel That Allows You to Have the Holy Spirit Dwell in Your Heart] (Isaiah 9:6-7) 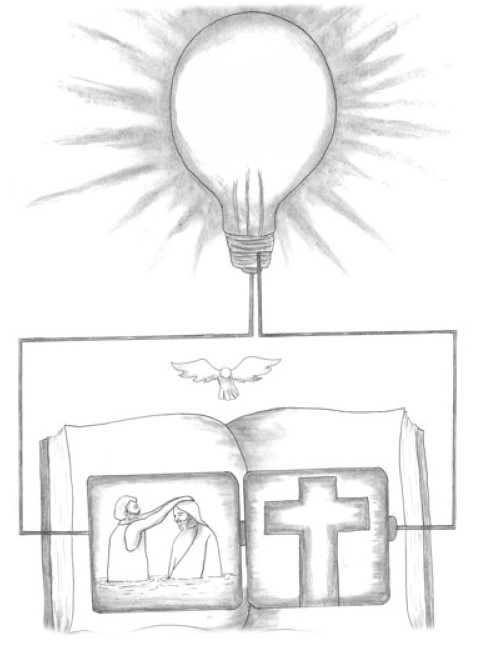 (Isaiah 9:6-7)
“For unto us a Child is born, unto us a Son is given; and the government will be upon His shoulder. And His name will be called Wonderful, Counselor, Mighty God, Everlasting Father, Prince of Peace. Of the increase of His government and peace there will be no end, upon the throne of David and over His kingdom, to order it and establish it with judgment and justice from that time forward, even forever. The zeal of the Lord of hosts will perform this.”
What allows the Holy Spirit to dwell in believers?
The beautiful gospel of the water and the Spirit

In order to receive the Holy Spirit, we need to have faith in the gospel of the water and the Spirit. Our Lord is named Wonderful, Counselor, and Mighty God. Our Lord referred to Himself as the pathway to Heaven. Jesus Christ presented everybody with the gift of the beautiful gospel.
However, in this world, there are so many people who still live in darkness. They try to escape from this darkness but because they do not know of the beautiful gospel, they can never escape from their sins. Instead they wither away from their belief in false doctrines. In contrast, for those who seek the truth, they will encounter the beautiful gospel and live the rest of their lives fulfilled with God’s blessings. I believe it is God’s special blessing that allows me to help them find the beautiful gospel and cleanse them of their sins.
Therefore, freedom from sin would be impossible if it weren’t for His blessing. If we have met the Lord and received the Holy Spirit then we are very much blessed. Regrettably, many people are not aware that God’s blessing comes from faith in this beautiful gospel.
God’s blessing results from believing in the beautiful gospel that was given to us by Jesus Christ, His only begotten Son. Jesus is the One who saves us from the sins of the world and blesses us with His mercy. No one else can save us from our sins nor help us erase the guilt in our hearts. Who could possibly save himself from his own sins and the pain of eternal death?
God tells us, “There is a way that seems right to a man, but its end is the way of death” (Proverbs 16:25). People establish their own religions and drive themselves toward destruction and death. Many religions boast that they emphasize righteousness and show their own ways to save people from their sins but it is only the gospel of the water and the Spirit, which our Lord gave us, that can save us from all our sins. Only Jesus is the Savior who can save sinners from their sins.
In John 14:6, our Lord said, “I am the way, the truth, and the life.” He gave His own flesh and blood to those on their way to death. He also referred to Himself as the way to true life. God says that if one does not believe in Jesus’ beautiful gospel, he cannot enter the Kingdom of Heaven.
We must believe in the gospel of the water and the Spirit, be forgiven for our sins and believe that He is our Savior in order to enter the Kingdom of Heaven.

Once in ancient Israel!

“Now it came to pass in the days of Ahaz the son of Jotham, the son of Uzziah, king of Judah, that Rezin king of Syria and Pekah the son of Remaliah, king of Israel, went up to Jerusalem to make war against it, but could not prevail against it” (Isaiah 7:1).
Israel was originally one nation. However, Israel became divided into south and north. The temple of God was in Jerusalem of Southern Judea, where Rehoboam, the son of King Solomon, ruled. Later, Jeroboam, one of Solomon’s servants, established another nation in the north and so Israel became divided. From that time, faith in God deteriorated. The deterioration of faith became the source of today’s heretical religions. Jeroboam thus became the originator of heretics. He amended the law of God because he needed to keep his throne and therefore, became the father of heretics. He created a different religion for His people in Israel, the Northern Kingdom and he even tried to invade Judah, the Southern Kingdom. Almost 200 years passed by, but the hostile relations between two kingdoms were unchanged.
However, God spoke through Isaiah, “Because Syria, Ephraim, and the son of Remaliah have plotted evil against you, saying, ‘Let us go up against Judah and trouble it, and let us make a gap in its wall for ourselves, and set a king over them, the son of Tabel.’ ─ thus says the Lord God: ‘It shall not stand, nor shall it come to pass. For the head of Syria is Damascus, and the head of Damascus is Rezin. Within sixty-five years Ephraim will be broken, so that it will not be a people. The head of Ephraim is Samaria, and the head of Samaria is Remaliah’s son. If you will not believe, surely you shall not be established’” (Isaiah 7:5-9).
At that time, God prophesized through Isaiah to King Ahaz, but the king had no faith in Him. Ahaz was merely worried that he wouldn’t even be able to hold out against Syria’s army, but hearing about the invasion of Syria and Israel in alliance with one another, he shivered in fear. But a servant of God, Isaiah, came and told him, “In less than sixty-five years, north Israel will be broken. And the evil conspiracy the two kings have plotted will never come true.”
God’s servant told King Ahaz to seek a sign from God. “Ask a sign for yourself from the LORD your God; ask it either in the depth or in the height above” (Isaiah 7:11). “Hear now, O house of David! Is it a small thing for you to weary men, but will you weary my God also? Therefore, the Lord Himself will give you a sign: Behold, the virgin shall conceive and bear a Son, and shall call His name Immanuel” (Isaiah 7:13-14). This was His prophecy: That He would save His people from their sins.

Who is the enemy of God?

The enemy of humanity is sin and sin originates from Satan. And who is the Savior from our sins? The Savior is none other than Jesus Christ, the Son of God. Man has fundamental weaknesses of flesh and therefore cannot but commit sin. He is under Satan’s power. A great many people still visit fortunetellers and try to live their lives exactly as these false prophets instruct them. This is direct evidence that they are under Satan’s control.
The Lord gave Isaiah evidence of salvation, saying that a virgin would give birth to a Son and name Him Immanuel. It was God’s plan to send Jesus in the likeness of sinful flesh of a man and have Him save sinners from Satan’s oppression. In accordance with the prophecy, Jesus came into this world as a human being born of the virgin Mary.
If Jesus had not come to us, we would still have been living under the reign of Satan. But Jesus came into this world and was baptized by John and died on the Cross in order to give us the beautiful gospel that would save all sinners from their sins. Therefore, many people believed in the beautiful gospel, received forgiveness for their sins and became children of God.
Even nowadays, many theologians argue as to whether Jesus Christ is God or man. The conservative theologians say “Jesus is God,” but some New Theologians retort by arguing that Jesus was Joseph’s illegitimate child. What a lamentable assertion this is!
Some New theologians say that they cannot believe that Jesus had the ability to walk on water. They say, “Jesus actually walked on a low hill over the horizon and His disciples, seeing Him from far away, thought He was walking on water.” Present-day doctors of divinity who belong to the schools of the New Theology aren’t all great men of theology. Most of them choose to believe only what they can comprehend in the Bible.
To give another example, the Bible says that Jesus fed 5,000 people with two fish and five loaves of breads. But they remain very skeptical regarding this miracle. They explain it in the following terms. “People were following Jesus and were starving to death. So Jesus asked His disciples to gather together all the leftover food. Then a child gave Him his meal voluntarily, and all the other adults were touched and took out their own food. So after they had gathered all the food together and eaten, twelve baskets were left over.” These kinds of theologians simply try to make God’s words fit their own very limited understanding.
Believing in God’s truth is simply having faith in the beautiful gospel God gave. Faith neither means believing one thing just because it seems to make sense nor failing to believe in something else because it doesn’t. Whether we can comprehend it or not, we must trust Him and accept His words as they are written.
The fact that Jesus came to us as the Son of Man means that He was sent to save us from all our sins. Jesus, who is God, came to this earth to save us. Isaiah had prophesied that He would come to us as the Son of Man, born of a virgin.
In Genesis 3:15, the Lord God said to the serpent, “And I will put enmity between you and the woman, and between your seed and her seed; He shall bruise your head, and you shall bruise His heel.” This means that God had planned to send Jesus, in the appearance as a man, as our Savior to save mankind from their sins.
In the Bible, it is written, “‘O Death, where is your sting? O Hades, where is your victory?’ The sting of death is sin, and the strength of sin is the law” (1 Corinthians 15:55-56). The sting of death is sin. When a man sins, death makes him its slave. But our Lord promised, “The seed of the woman shall bruise your head.” This means Jesus would destroy the sting of the sin that Satan brought.
Jesus came into this world, was baptized to take away all the sins of the world and was crucified and judged for them. He saved from their sins all those who believe in the beautiful gospel. When Adam and Eve sinned, God promised to save mankind from Satan’s power. In the modern world, the enemy of God is those who do not believe in the beautiful gospel.

Why was Jesus born in this world?

Behold! The Lamb of God who takes away the sin of the world!