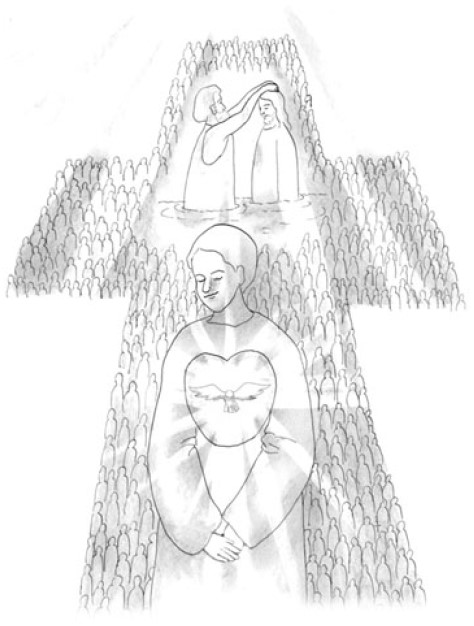 (Ephesians 2:14-22)
“For He Himself is our peace, who has made both one, and has broken down the middle wall of separation, having abolished in His flesh the enmity, that is, the law of commandments contained in ordinances, so as to create in Himself one new man from the two, thus making peace, and that He might reconcile them both to God in one body through the Cross, thereby putting to death the enmity. And He came and preached peace to you who were afar off and to those who were near. For through Him we both have access by one Spirit to the Father. Now, therefore, you are no longer strangers and foreigners, but fellow citizens with the saints and members of the household of God, having been built on the foundation of the apostles and prophets, Jesus Christ Himself being the chief cornerstone, in whom the whole building, being fitted together, grows into a holy temple in the Lord, in whom you also are being built together for a dwelling place of God in the Spirit.”

The adopted child due to poverty

What has alienated man from God?
His sin has done.
Half a century has passed since the end of the Korean War. But it left tremendous wounds among the Korean people. In the aftermath of the Korean War, many young children were adopted to foreign countries. Even though the United Nations forces came to Korea and helped us enormously at that time, but many children were left fatherless after the soldiers left.
Many of the UN soldiers who had wives and children here left their families behind when they returned home. Many of these children were then again abandoned to orphanages by their mothers and then sent away for adoption to foreign countries. It was actually very fortunate that these young people could find foster parents and be brought up very well.
These adopted children realized that they looked quite different from their parents and their neighbors as they grew older, and they learned that they were adopted from a far away country called Korea. ‘Why did my parents abandon me? Did they send me away to this country because they hated me?’ With their young minds, these children just couldn’t understand what had happened.
Their curiosity and hatred toward their real parents began to grow in tandem with a longing to meet them. ‘I wonder what my parents look like? How could they abandon me? Did they do it because they hated me? No, there was probably a reason for this.’ They probably had many misunderstandings and sometimes even felt extreme hatred. And at other times they likely resolved not to think about it anymore. Before they were even aware of it, time had passed and the children grew up to be adults. They got married, had children and formed families of their own.
I became interested in these children through a program on one of the local TV networks. In this program, a TV reporter interviewed a woman now living in Germany who had been adopted. This woman was in her twenties at that time and was studying theology. At first, the woman very much tried to avoid meeting the reporters because she didn’t want anyone else to become aware that she was adopted. The reporter persuaded her to understand that submitting to an interview would help stem the tide of adoptions to foreign countries. The woman agreed.
One of the reporter’s questions was, “What would you say if you could meet your real parents? What are you most curious about?” The woman answered, “I just can’t understand why they had to put me up for adoption. I want to ask them if they hated me.” Her birth mother saw the woman’s interview on TV, contacted the broadcasting station, and said that she wanted to meet her daughter. This is how the two came to meet.
The mother went very early to the airport and waited for her daughter’s arrival. When the young woman emerged from the exit, her mother could only stand there and weep.
These two people had never met face to face. The first time the mother saw her grown-up daughter was when she appeared on TV. Even though they spoke different languages, they could talk with their hearts, and through the emotional looks they exchanged. They touched each other’s faces while the mother begged for forgiveness for what she had done. All she could do was cry and repeat that she was very sorry.
The mother brought her daughter home and they ate together. Of course, the daughter only spoke German and the mother only Korean, so they couldn’t communicate verbally. But somehow the fact that they were mother and daughter allowed them to make themselves understood. They had many wordless conversations and expressed themselves through gestures, touching each other’s faces and talking with their eyes and their hearts.
By the time she returned to Germany, the daughter knew that her birth mother loved her. The same reporters that had conducted the previous interview spoke to her once again before her departure. “There was no need for me to ask why my mother had given me up for adoption. My mother is poor even now. Wealthy people in this country are so rich that they drive foreign cars, but my mother is still living in poverty.” She went on to say, “Even though I didn’t ask my mother that question and didn’t receive an answer from her, I could see that she sent me away to save me from poverty. That is why I didn’t feel the need to ask her that question, and why all doubts and hatred are now gone.”

Jesus’ baptism washed away all the sins of the world

Through Jesus’ baptism by John in the Jordan River, all the sins of the world were transferred to Him. And His total submersion in the water symbolized His death and His emergence from the water represented His resurrection. In other words, Jesus was baptized by John to take all the sin of the world, paid the wages of sin and died on the Cross. His death was to pay the price for our sins and His resurrection gave us eternal life.
If we didn’t believe that Jesus took away all our sins through His baptism, our hearts would be full of sin. In that case, how could we possibly draw near to God? The gospel of the remission of sins is not a doctrine of one denomination but the truth of God.
We cannot lead our faith without perfect knowledge, in other words, we can’t overcome the world if we don’t really care whether Jesus was baptized by John. Just as all living things need water in order to sustain their lives, we need the remission of sins and the water of Jesus’ baptism in order to live by faith and enter the Kingdom of Heaven. Jesus had to be baptized, die on the Cross and resurrect in order to save us from our sins. This is the gospel of the water and the Spirit, which we must believe with all our hearts.
Even though Jesus was crucified to death on the Cross, He had done nothing to deserve such punishment. He came into this world to wash away our sins, was baptized at age 30, and became our Savior through His death on the Cross at age 33. God wanted to make mankind His children no matter how fragile and sinful we were. That’s why Jesus was baptized. God gave us the remission of sins and the gift of the Holy Spirit at the same time.
The Bible says that unless one is born again of water and the Spirit, he can neither see the kingdom of God nor enter it (John 3:3-5). You have to know and believe that Jesus was baptized in order to wash away all our sins. Even if one is a born-again Christian, if he doesn’t meditate on the truth that Jesus Christ took away all the sins of the world through His baptism, his heart will soon become soiled. Because we are corporeal beings, we are liable to be soiled by sin even in daily life. That’s why we always have to live by faith, meditating on Jesus’ baptism, His blood, and His resurrection. This faith upholds us until the day we enter the Kingdom of Heaven.
Jesus had no choice but to be baptized and die for our sins, so we must believe that by doing so He brought us salvation. There is nothing more we have to do than believe in this beautiful gospel in order to be delivered from all the sins of the world.
We give thanks to the Lord, who gave us the gospel of the water and the Spirit. The greatest gift God gave us was to send His only begotten Son to save us from all our sins through His baptism and blood.
The reason we couldn’t draw near to God and were forced to live apart from Him was that we had sin in our hearts. Jesus was baptized by John to take away all the sins of the world and died on the Cross in order to break down the wall that was separating God and man. The relationship between God and man was restored by His baptism and blood. We thank Him for these gifts. The love of the physical parent toward their child is great, but it is incomparable to God’s love, by which Jesus saved us sinners.
Jesus’ baptism and blood are both important. If there were no water in this world, would any living thing survive? Without Jesus’ baptism, there would be no one without sin in his heart. If Jesus had not been baptized and if He had not died on the Cross, no one would have received the remission of sins. Fortunately, Jesus was baptized and made the ultimate sacrifice for us. Even though we are lacking and fallible, we can receive the Holy Spirit by believing in His baptism and blood on the Cross.
People who believe in Jesus Christ’s baptism and death on the Cross can draw near to God, pray and praise Him. We are now able to praise the Lord and worship Him because we have become His children. This is God’s grace and blessing. The gospel of the baptism of Jesus and His blood on the Cross is truly wonderful. We can all receive salvation and the indwelling of the Holy Spirit by believing in this beautiful gospel.
Syarat dan ketentuan Kebijakan Pribadi Cookie Declaration Hubungi KAMI