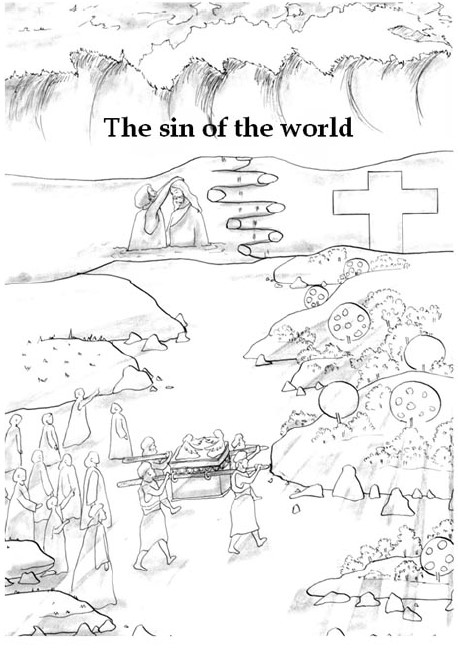 (Joshua 4:23)
“For the LORD your God dried up the waters of the Jordan before you until you had crossed over, as the LORD your God did to the Red Sea, which He dried up before us until we had crossed over.”
What does the event of the Jordan River teach us?
It teaches us that Jesus Christ had completely eliminated death caused by sin and subsequent judgment from mankind.

I would now like to speak about the beautiful gospel of the truth that lets us receive the indwelling of the Holy Spirit. After the death of Moses, God appointed Joshua as the leader of Israel. Moses was the representative of the law in the Old Testament. If Moses had crossed the Jordan River with the people of Israel and arrived at Canaan, it would not have been necessary for Joshua to become the leader of the people. However, God made Moses reach the area just in front of the land of Canaan and prevented him from entering it.

Our Lord gave us Moses and Joshua

Moses, the representative of the law in the Old Testament, couldn’t take the people of Israel into Canaan. If he had done so while being led by the law, it would have been against God’s plan for our salvation. No one can be free from his sins before the law of God because nobody can keep the law. Because the law is only for the knowledge of sin (Romans 3:20).
The reason why God gave man the law is to give him the knowledge of sin, to make the law his tutor and lead him to Christ so that he could be justified by faith (Galatians 3:24). Since the law was nothing more than a guide to finding Jesus, people needed Jesus, and this is why Jesus had to come into this world. What God directed Joshua to do was to order the people of Israel to cross the Jordan River and enter the land of Canaan.
God led them to enter the land of Canaan with their new leader, Joshua, after the death of Moses. Joshua commanded the officers of the people, saying, “Pass through the camp and command the people, saying, ‘Prepare provisions for yourselves, for within three days you will cross over this Jordan, to go in to possess the land which the LORD your God is giving you to possess’” (Joshua 1:11).
God ordered Joshua to enter Canaan after it had proven impossible through Moses. God commanded Joshua, saying, “You shall command the priests who bear the Ark of the Covenant, saying, ‘When you have come to the edge of the water of the Jordan, you shall stand in the Jordan.’ So Joshua said to the children of Israel, ‘Come here, and hear the words of the LORD your God.’ And Joshua said, ‘By this you shall know that the living God is among you, and that He will without fail drive out from before you the Canaanites and the Hittites and the Hivites and the Perizzites and the Girgashites and the Amorites and the Jebusites’” (Joshua 3:8-10).
After the death of Moses, God appointed Joshua the leader of Israel and ordered him to enter the land of Canaan with the people of Israel. The name Joshua means “the Savior,” synonymous with “Jesus” or “Hosea.” A servant of God, Joshua ordered the priests to bear the Ark of the Covenant and to cross the Jordan River while leading the people. When the priests bearing the Ark dipped their feet in the water (for the Jordan overflows its banks during the time of the harvest), the waters that came from upstream stood still and rose very far away at Adam, the city that is beside Zaretan. So the waters that went down into the Sea of Arabah, the Salt Sea, were cut off and the people could cross over opposite Jericho (Joshua 3:15-16).
Through this incident, God teaches us that He had completely eliminated death caused by sin and subsequent judgment from mankind. In other words, Jesus Christ our Savior took away all the sins of mankind when He was baptized by John the Baptist and was crucified. In this way, He saved mankind from their sins by leading them into the land of Canaan, which stands for the Kingdom of Heaven.

The Jordan River is the place where mankind was purified

The historical events surrounding the crossing of the Jordan river, as recorded in the Old and the New Testaments, were tremendously important events which were to lead to eventual salvation from the curses and judgments arising from the sins of mankind.
The Jordan River was referred to as the river of death, and the terminus of the river is the Dead Sea. The word Jordan means “a river that only flows downward, toward death” or “be immersed, suppress, to force down, fall out.” This clearly indicates the history of humanity’s sins. In this river, Jesus, through His baptism, received all the flow of sins that cannot be ceased by any human being, and later died on the Cross and thereby accepting judgment in humanities’ place for these sins.
Where are we, the descendants of Adam and Eve, headed for? Since all creatures are born with sin, they commit sins, and as the wages of those sins, they march toward death. Throughout the history of humanity, all creatures are heading for destruction from their birth. Even though they try hard to control their sinful nature, they can’t, and that’s why they are moving toward a final judgment for their sins.
However, God cut off the flow of sin and judgment. God led Joshua to take the people of Israel into the land of Canaan by crossing the Jordan River. This was God’s will for Joshua. This story suggests that in order to be freed from sin, we must pay the wages of sins, which is death, and that through this price, we are purified of all our sins and enter Heaven.
In the Old Testament, the flow of the river was stopped, and it was changed into a dry land when the priests who bore the Ark of the Covenant dipped their feet in the water. This allowed the people of Israel to cross the river. This was the remission of sin that was given only to those who believed in the beautiful gospel. It was the gospel of the water and the Spirit that paid the wages of sin for mankind, and we have come to receive the indwelling of the Holy Spirit by believing in this beautiful gospel.

Naaman, who appears in chapter 5 of 2 Kings, was a great and honorable commander of the army of Syria who had saved his country from its enemies. He was also a leper who was destined to lose everything because of the curse. But he later heard the beautiful news that he could be rescued from this curse. It was said that he could be cured if he went to see a servant of God who lived in Israel. It was a small girl servant who delivered this news. She said, “If only my master were with the prophet who is in Samaria! For he would heal him of his leprosy” (2 Kings 5:3).
He believed this news and went to Israel. When he arrived at the front of the house of Elisha, Elisha sent a messenger to him, saying, “Go wash in the Jordan seven times, and your flesh shall be restored to you, and you shall be clean.” (2 Kings 5:10). Having expected a miraculous cure, Naaman became furious and decided to return to his home country. However, because of his servant’s eager request, he obeyed Elisha and went down and dipped his whole body seven times in the Jordan. There, his flesh was restored, becoming once more like the skin of a young child.
In the same way, we have come to know that in order to be forgiven for all our sins, we must forsake our own thoughts and accept what is written in the Bible. Then we will be given beautiful blessings. Whoever wants to be saved must obey God’s words and wholly believe in them.
The Bible says that all the sins of the world were washed away by the gospel of Jesus’ baptism and blood. We must not think in the same way as the disobedient Naaman. We can’t be cleansed of our sins without the gospel of the water and the Spirit. Therefore, in order to be forgiven for all our sins, we must believe in the beautiful gospel of the water and the Spirit. Just as Naaman became clean by dipping his body seven times in the water, we believe that we can be cleansed of our sins by believing in the beautiful gospel of Jesus’ baptism, crucifixion and resurrection. We must believe in this beautiful gospel as it is.
This miracle in the Jordan River presented all descendants of Adam with a blessing that cut off the flow of all sins and ended the judgment. All of humanity was expelled from the Garden of Eden because Adam and Eve sinned after being tempted by Satan. However, the incident in the Jordan was the beautiful gospel that leads all mankind to return to the Garden of Eden.

The event of the Jordan River