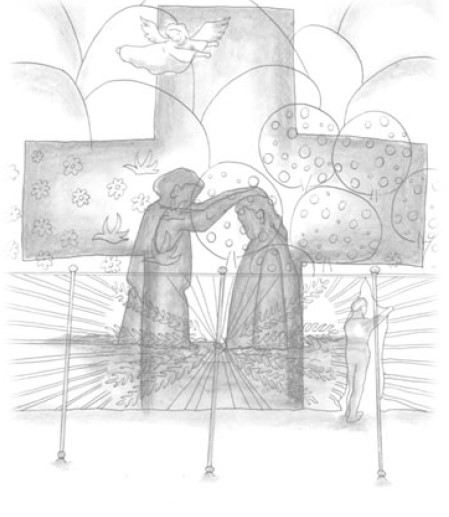 (Matthew 27:45-54)
“Now from the sixth hour until the ninth hour there was darkness over all the land. And about the ninth hour Jesus cried out with a loud voice, saying, ‘Eli, Eli, lama sabachthani?’ that is, ‘My God, My God, why have You forsaken Me?’ Some of those who stood there, when they heard that, said, ‘This Man is calling for Elijah!’ Immediately one of them ran and took a sponge, filled it with sour wine and put it on a reed, and offered it to Him to drink. The rest said, ‘Let Him alone; let us see if Elijah will come to save Him.’ And Jesus cried out again with a loud voice, and yielded up His spirit. Then, behold, the veil of the temple was torn in two from top to bottom; and the earth quaked, and the rocks were split, and the graves were opened; and many bodies of the saints who had fallen asleep were raised; and coming out of the graves after His resurrection, they went into the holy city and appeared to many. So when the centurion and those with him, who were guarding Jesus, saw the earthquake and the things that had happened, they feared greatly, saying, ‘Truly this was the Son of God!’”
Why was the veil of the Temple of God torn when Jesus gave up His spirit on the Cross?
Because the Kingdom of God came to be opened to those who believe in His baptism and crucifixion.

In order to understand the truth of this beautiful gospel, one must first know and understand the sacrificial system performed to forgive people’s sins before God in the Old Testament. You must know and believe the following truth.
According to the ancient sacrifice of atonement, as recorded in Leviticus chapter 16 in the Old Testament, the high priest laid his hands on a live goat and transferred to it all the sins accumulated by the people over the course a year. Then on behalf of the Israelites, the sacrifice was killed, and the high priest sprinkled its blood on the mercy seat. This atoned for all the sins of the Israelites. Likewise, only those who believed in the laying on of hands, the blood and the words of God could enter the Holy sanctuary.
The priests always went into the first part of the tabernacle, performing the services. But into the second part, the Most Holy Place, the high priest could enter alone once a year, not without blood, which he offered for himself and for the people’s sins committed in ignorance (Hebrews 9:6-7). Likewise, even the high priest couldn’t enter the Most Holy Place without the blood of the sacrifice prepared through the laying hands on by faith.

As told in the New Testament, Jesus Christ was sacrificed for us

Do you want to be cleansed of all your sins?

Just as we need to pay to get out of debt, we must have faith in the beautiful gospel of Jesus’ baptism and blood in order to be cleansed of all our sins. We should not commit the sin of disbelief in the gospel of Jesus’ baptism and blood. Although we did not directly pass on our sins to Jesus, a mediator called John the Baptist did the task for us.
When Jesus died on the Cross, some tombs of the saints in Jerusalem opened and three days later He was resurrected and went into Galilee. This wonderful event really did take place, but there were many people who did not believe it.
Our Lord granted the Kingdom of Heaven to us, the righteous, who received the remission of sin. We were saved and born again, not through our own physical power or religious efforts, but through our faith in the beautiful gospel. This gospel is not a fictional story. All the sins of the world were passed on to Jesus when He was baptized. There was no sin in Him, but He had to die on the Cross to atone the very sins He took on at His baptism.
When Jesus gave up His spirit, the earth quaked and the rocks split open. When the centurion and those with him who were guarding Jesus’ body felt the earthquake and the things that had happened, they felt tremendous fear, testifying, “Truly this was the Son of God” (Matthew 27:54).
Joseph a rich man from Arimathea took the body of Jesus, wrapped it in a clean linen cloth and laid it in his own tomb. The high priest and the Pharisees gave orders for the grave to be made secure until the third day.
However, Jesus was resurrected to give new life to those who believe in the beautiful gospel. He went into Galilee, where He had promised to meet His disciples before He was crucified. All these things – His birth, baptism, crucifixion, resurrection, ascension and the Second Advent – were aimed at those who believe in the beautiful gospel. I have also become a testifier who testifies that Jesus is the Son of the living God and my Savior.

By whom is the true gospel preached?

The believers in Jesus’ baptism and blood testify to the beautiful gospel of the truth. The beautiful gospel is spread through the testimony of these people saved from all their sins. When a person is freed from his sins by believing in the gospel, the Spirit of God begins to govern him, and He changes him regardless of his own will. The soul winning words of God continuously transforms a righteous man and gives him even stronger faith. In turn, he comes to praise the Lord. The word of God abides in him, and as a result he experiences the renewal of his inner being day by day. Seeing him thus transformed, people testify, “He is really a delivered man. He became a genuine Christian and a child of God.”
Even the devil accepts and succumbs to this beautiful gospel. “I’m mortified!” he says. “But it’s true that there is no sin in the world. No one has sin in his heart.” Therefore, the devil works in the thoughts of people, interfering with their faithful lives. The work of the devil is to prevent them from receiving the spiritual blessings of the gospel.
Satan lost the battle with Jesus absolutely. Satan succeeded in having Jesus crucified by controlling people’s minds. However, Jesus had already taken away the sins of the world when He was baptized, and when He died on the Cross to pay off the wages of the sin. For this reason, He completely saved all the believers in the gospel.
The devil was unable to obstruct God’s plan to save mankind from their sins. Jesus paid for the sins of mankind through His baptism and blood to complete the beautiful gospel. Now there is no sin in this world. Jesus took away all sin through His baptism and put an end to all sin through His death on the Cross, saying, “It is finished!” (John 19:30) Satan was deprived of the power to accuse those who have faith in the beautiful gospel. Jesus defeated the devil through His birth, baptism, crucifixion and resurrection.
Do you still have sin in your hearts? No. Christians can confidently say, “I have no sin in my heart” on the basis of their faith in the beautiful gospel of truth. The person who believes in the beautiful gospel of Jesus’ baptism and blood doesn’t have even an ounce of sin in his heart.
Now the beautiful gospel has been engraved in our hearts. We now stand free of any compunction in the presence of God. Do all of you believe that Jesus took away all your sins through His baptism in the Jordan River? If so, your gratefulness to God and joy will be made full. By having faith in the beautiful gospel, we have been sanctified and freed from our sins in this world. We thank God.
“He has delivered us from the power of darkness and conveyed us into the kingdom of the Son of His Love, in whom we have redemption through His blood, the forgiveness of sins” (Colossians 1:13-14). Hallelujah, praise the Lord.
Jesus opened up the gate to salvation through the beautiful gospel. You also must break down the barrier in your heart all at once with the power of the beautiful gospel, just as the veil of the Temple was torn in two. The beautiful gospel was made for you and me. We can enter the Kingdom of Heaven by believing in this gospel, and it is the ultimate truth that allows us to achieve the indwelling of the Holy Spirit.
規約と条件 個人情報保護方針 Cookie Declaration 問い合わせ