[Chapter 14-2] How Should the Saints React to the Appearance of the Antichrist? (Revelation 14:1-20) 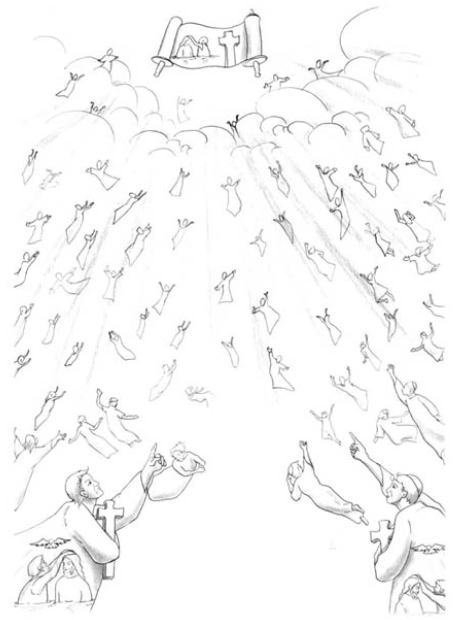 (Revelation 14:1-20)
To overcome the Antichrist when he appears in the near future, the saints must prepare themselves to be martyred with their faith in the Lord. To do so, they must know well about the wicked schemes the Antichrist would bring on this earth. Only then can the saints stand against him and overcome him with faith. Satan will try to destroy Christians’ faith by making people receive the mark of his name or number.
The reason why he tries to destroy the faith of Christians is because by standing against God and bringing down the faith of the righteous, he seeks to prevent people from receiving the remission of their sins through the gospel of the water and the Spirit. The Antichrist will turn people into his servants and make them stand against God. For this, the Antichrist and his followers who still remain on this world receive great punishments and plagues.
The righteous must live their lives of faith with a clear understanding of the plagues of the seven bowls that God would pour on their enemies. As God says in Deuteronomy 32:35, “Vengeance is Mine, and recompense,” He will avenge His children’s death on them. As such, we must defend our faith and live a life of victory, rather than being overwhelmed by our anger and doing its fruitless works. Believing in the fact that God would destroy all those who still remain on this earth after their martyrdom, the saints must fight against the Antichrist.

The Word of Truth That Must Never Be Forgotten

What all those who have received the remission of their sins must remember is that only the sinless saints will all be resurrected and raptured shortly after being martyred by the Antichrist. When the day of the Antichrist’s appearance and the saints’ martyrdom comes, we must never forget that every promise of God will all be fulfilled.
From verse 14 and on, the Word of God in chapter 14 teaches us that the rapture will most certainly come to the saints, and that the time of this rapture is right after their martyrdom.
We must not forget that our resurrection and rapture will come after Satan makes people receive his mark. For the righteous who are martyred by the Antichrist, the blessings of the first resurrection and rapture await them. The righteous will embrace their holy martyrdom to defend their faith at this time, for they will refuse to receive the mark of Satan. The martyred righteous will therefore receive their rewards according to their labor on this earth, and the glory of God will be added to them.
Do not be mournful, nor angered, when you see that the fellow saints or servants close to you are martyred to defend their faith. On the contrary, all the saints must in fact thank God and give glory to Him for allowing them to be martyred to defend their faith, for shortly thereafter the martyrs would be resurrected in holy bodies and raptured by the Lord.

What Are the Plagues of the Seven Bowls Prepared for Those Who Stand against God?