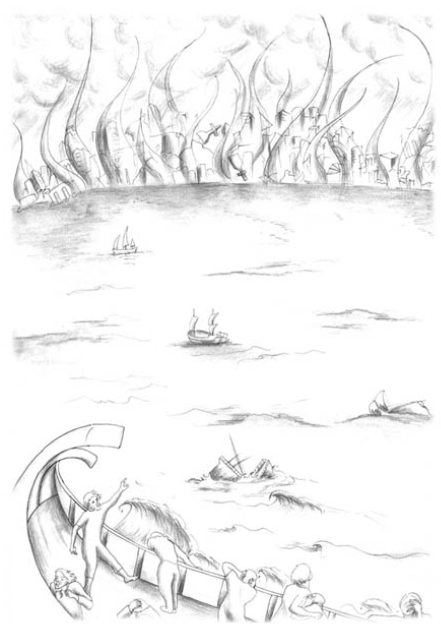 (Revelation 18:1-24)
God tells us in chapter 18 that He would destroy the great city Babylon with His great plagues. Because by the end times this world would have turned too filthy and sinful before God’s eyes, and because God would thus have no other choice but to destroy it despite having created it Himself, He will allow the great, apocalyptical plagues that would end the earth. This world will therefore be laid to ruins until it is completely brought down.
The actual reason why God would destroy the world is because He would have seen the blood of His prophets and saints. And because this world would have committed too many and too great sins with all the things that God had given it, it would have become too filthy for God to tolerate. The most beautiful planet that God has created is the planet earth. This is so because God Himself worked on this earth with keen interest, and because it is also the place where God’s plans and His work of saving sinners in Jesus Christ have been fulfilled.
Nevertheless, God has already planned how He would destroy this world and how He would make the Kingdom of Christ come. When this world is filled with all kinds of filthiness, God will destroy it through His angels with the plagues of the seven bowls. He will then renew all things and have His saints reign in His new world.
The Fallen City of Babylon!
The kings of the earth have fornicated with the things of the world and lived in its luxury, while all the merchants, too busy selling and buying everything that God has given them, have lost God Himself in their pursuit of greed. God will destroy everything and all—buildings, religions, merchandises found within religion, people who have enriched themselves through religion, kings, politicians, people obsessed with material possessions, and more—all these will be brought down by God.
God will shake down every building on this earth and leave no building standing, and He will destroy all things, from people to forests and trees, with His fire. When everything in this world thus falls, people will lament and weep. In particular, God will make sure to destroy all those who had enriched themselves through religion. It is very important for us to know beforehand and believe in the fact that God will thus destroy this beautiful world that He had created Himself.
At this time, God will allow the born-again saints who had participated in the first resurrection of Jesus Christ to reign on this earth for a thousand years. With the Kingdom of the Lord, He will compensate the saints for serving the gospel of the water and the Spirit and for being martyred to defend their faith while on this earth. God will give them authority over ten cities, over five cities, and over two cities and let them reign for a thousand years, and after this, He will also give them the New Heaven and Earth to live forever.
Why, then, is God going to destroy the earth, the most beautiful planet in the entire universe? It is only on this planet earth that fish can swim in rivers, wild animals can roam in the forests, and the mankind can live. But because God would no longer be able to tolerate a world where sin has become so rampant, He will lay this world to its complete ruins with His plagues. God has decided to destroy the world.
Everyone living on this earth, except those who have been saved, will be destroyed by the plagues of the seven bowls. Because all the righteous of the end times would be martyred, persecuted and oppressed by this world, God will trample on the world itself in return for its evil deeds. When this time comes, the religious leaders and merchants who had traded in people’s souls will all be destroyed. God will not only kill all those who acted as religious leaders without having been born again, but He will also throw them, along with the Devil, into the lake of fire and brimstone.
God will most certainly destroy this world. As such, we much realize and believe beyond a trace of doubt that this world is to be destroyed. God will kill all the merchants who boast of all kinds of great things and traffic in people’s souls with their religion. And yet, even as God’s plagues are so imminent, people still remain arrogant in their confidence. Just take a look at the religious leaders of this earth. Are they not all prideful, as if they were doing the right thing before God? Would God really approve what such people do?
If God said that He would destroy this world for the sins of these people, then we must believe as such, for all things will come to pass exactly as God said that they would. And we must defend our faith. I am not saying this as just another one of those cult leaders who make up their own little doctrines and speak of the coming apocalypse, but I am saying this because we must believe in what God has told us in the Scripture —that is, the Living God will most certainly destroy this world with the great plagues of the seven bowls.

As such, we must not be obsessed with accumulating the material possession of this world that is soon to be destroyed. We must be satisfied with what God has given us, and use and share them as God pleases. The material things of the world are needed only to serve God. We must live as the faithful servants who manage what God has given them for the preaching of the gospel. We must not be tangled up with the material things of the world, for we believe that God will destroy this world.
We must not fool ourselves thinking that the wealth and value of this world would last forever. Knowing that God will trample on all the religious leaders and their followers as well, we must live waiting for the day of the Lord’s return. If not, we will end up falling into the world, a world that will shortly be destroyed. As such, to not fall into a world facing its own destruction, we must believe that this planet earth will indeed be destroyed.
God is alive at this very moment, and when the time comes, He will fulfill all that He has said. While it is true that even among the born-again there are those whose faith is yet to mature, we must nevertheless all believe without a doubt. And we must be all awake once again. We must never lose our hearts to this world that would soon be destroyed, but instead live our lives by placing our unfaltering and unshakable faith in the Word of God. Our hearts may at times weaken, but we must still live with strong faith.
That God will do all these things to this world is wonderful to us. Were God not to destroy this world and build the new Kingdom of Christ in its place, the righteous would be greatly disappointed. This is why God’s plan is so wonderful, and why it gives hope to the righteous saints.
If the unbelievers were to remain in their arrogance and yet they live well in happiness while on this earth and even enter Heaven with us afterwards, it would be so unfair to us that God would never allow this to happen. God’s promise, that He will judge and destroy all those who persecute the righteous, torment them with their lies, and shed the blood of the saints, is only just and right.
If there were to be no judgment of God for the sinners of this world, would it not be so unfair to the righteous who have lived all their lives for the sake of the Lord in perseverance despite facing all kinds of troubles and difficulties? It is therefore only right that God would judge this world. When this world becomes like the world of Noah’s time, God will most certainly turn the whole world upside down and destroy it.
Because we believe in the Lord, we do not envy the people of the world at all. Because the Lord has said that He will judge this world and throw Satan, the Antichrist and his followers into the fire of hell, we can all persevere and wait.
This world is only a minute away from being destroyed, all in accordance to the prophecies of the Word of God. Throughout the earth, we have already seen many signs indicating the imminent arrival of the plagues of the end times.
Weather abnormalities such as the El Niño phenomenon and such new diseases as the Mad Cow Disease are rocking today’s world. Incurable diseases that the mankind is powerless to tackle are engulfing the world, as are such large-scale, previously unimaginable disasters as great famines and devastatingly destructive earthquakes striking throughout the earth.
When all these things are happening, we must believe that God exists, and live our lives knowing that God will judge and bring down all those who had lived only for their lusts amassing their wealth while in this world. Sin has become so rampant in today’s world. This world is too extravagant in its luxuries. People are too busy getting married, eating and drinking, and building their houses to pay any attention to their spiritual well-being. Today’s world is a world where a man commits sexual sin with another man, and not a few women burn in their lust for one another (Roman 1:27).
Was the world not like this in Noah’s time? You might know well of the etymology of the word ‘sodomite.’ When Sodom and Gomorra were destroyed, their culture had been just like that of today’s world in which we now live. This world has become so filthy and sinful, to the extent that God would bring down fire and burn it to ashes, and it has turned into a world fully occupied by demons.

False Prophets Are to Be Put to Death

The false prophets always seek after material possessions and accumulate wealth illicitly, hiding behind the relative autonomy extended to their religious institutions. “If you believe in Jesus, you’ll be rich, live well, and cure your disease”—you must realize that behind every such lie, the hidden purpose of material exploitation is always present.
In Korea, too, it’s been a long time since Christianity has lost its fundamental faith and been corrupted, with all kinds of demonic forces running rampant in the name of Jesus. This is the reality of today’s Christianity. But to the false prophets who measure faith with the material possessions of the world and commit sorceries with the Word of God, His fearful judgment of hell and the great plagues of the seven bowls are awaiting.
God tells us that both the ones who deceive the people and those who are deceived by the false prophets will alike be judged. We must not look toward this world and follow it. We must instead believe that because God is alive, those who, not believing in Jesus, stand against Him and persecute the righteous will all be judged and condemned to eternal death. And we must also believe that after thus judging the world, God will most certainly reward the saints for all their suffering and pain born for the sake of the name of Christ.
Terms and Conditions Privacy Policy Cookie Declaration Contact Us