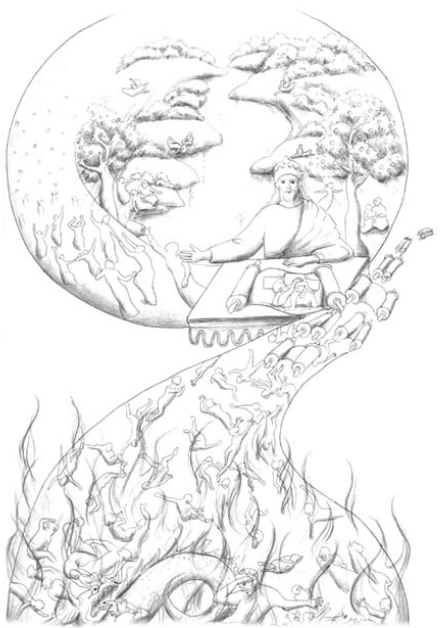 The One and Only Gospel That Would Qualify You for Heaven

For one to receive the Holy Spirit and enter Heaven, he/she must believe solely in Jesus’ baptism and blood. Because our Lord came to this earth to save all the sinners from all their sins by taking all such sins of the mankind onto Himself, He had to be baptized by John. Having thus received His baptism, Jesus Himself was then crucified on the Cross in our place, was judged for all our sins, rose from the dead again, and became the Lord of eternal salvation for those who believe.
This Lord will now return to the earth, embrace His people who have become His brides through faith, and live with them forever. Those who have become His brides will now live with the Lord on a new earth, a glorious and glorifying blessing for the brides. The saved children of God will thus give glory to Jesus Christ by praising Him forever. These people who are to be reigned by God will rejoice in their happiness. And for this joy, they will give all glory to the Bridegroom.
The whole mankind has been waiting for this event since the very creation. This event is fulfilled when Jesus returns, lifts up those who have received the Holy Spirit, and lives with them. God has made a new world for the mankind and is waiting for us. We exist for this, and for this we have been born into this world.
As the main passage tells us, “His wife has made herself ready. And to her it was granted to be arrayed in fine linen, clean and bright,” God has clothed those who believe in Jesus Christ in clean, fine linen. Those who believe in this Word, in other words, have received the remission of sin and their hearts have turned white as snow.
Like this, the brides of Jesus Christ are already prepared beforehand with the gospel of the water and the Spirit. By hearing and believing in the gospel of the water and the Spirit while on this earth, one can be born again as Jesus Christ’s bride. This faith is what makes you Christ’s bride, and this faith is what qualifies you to enter Heaven.
Those Who Wait in Hope
The main passage tells us, “Blessed are those who are called to the marriage supper of the Lamb!” With what kind of faith should those who have received the remission of their sins live? The brides who have met their Bridegroom Jesus and are living in glory must live their lives in faith and hope, looking forward to the day of their union with this Bridegroom.
As the world gets darker and darker, there is still hope for the saved brides. This hope is none other than waiting for the day when Jesus Christ, having prepared the New Heaven and Earth for His brides, would return to take them away. The Bridegroom will resurrect all His brides then, and give them eternal life. The world in which the Bridegroom and the brides are to live forever is a place that is free from evil, has no sin, and lacks nothing. The brides wait only for this day. This is why those of us who have received the remission of all our sins live with such faith and hope.
The brides who are now living in the present era, in particular, also have many shortcomings of the flesh. But as 1 Corinthians 13:13 tells us, “And now abide faith, hope, love, these three; but the greatest of these is love,” because the Bridegroom has thus loved His brides, He would cleanse away all their sins with His baptism and accept them as His perfect brides.
This world is running toward its final demise and has no hope left in it. But even as everything is moving ever closer to destruction, the brides must live their lives with their special hope. The time for the fulfillment of this hope is now nearing us. The whole world is now at the risk of crumbling down from earthquakes. The day has neared for everyone in this world to disappear like the extinct dinosaurs of the ancient times. All of a sudden, this world will simply fall down.
Every bride, however, has hope, for when time comes, the bodies of the brides will be transformed into perfect bodies, and they will live with the Lord, who has become their Bridegroom, forever and ever. The brides, therefore, must preach the gospel of the water and the Spirit more faithfully to the worldly people of this era.

Let Us Believe in the True Word of God!