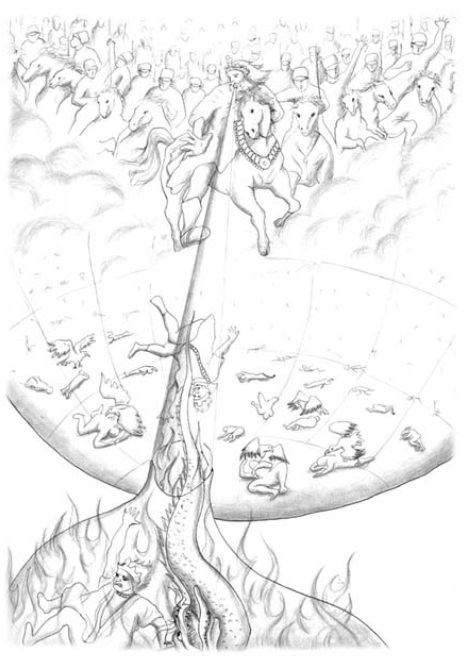 (Revelation 20:1-15)
God tells us that when He makes this world disappear and gives us the New Heaven and Earth instead, He would resurrect every sinner who had lived on this earth before and had been asleep in his/her tomb. Verse 13 here says, “The sea gave up the dead who were in it, and Death and Hades delivered up the dead who were in them.” The body of a man who drowns in water would most likely be eaten by fish, while that of a man who burns to death would leave virtually no form to be recognized anymore. Yet the Bible tells us here that when the end times come, God would resurrect all back to life and judge them to send to either Heaven or hell, regardless of whether they were swallowed up by Satan, killed by Hades, or burnt to death.
Before God lies the Book of Life, in which the names of those who would enter the eternal Kingdom of Heaven are written. There also are the Books of Deeds, which record the names and sins of all those who would be cast into hell. In these Books of Deeds are written all the sins that one had committed while living on this earth. All these things have been determined by God in His providence.
The Lord Has Two Kinds of Books

God has already classified people into two mutually exclusive categories according to His own just criterion. It has been determined by God that all the dead would be resurrected, and then stand before His two books and be judged. In the Book of Life are written only the names of those who have believed in Jesus while on this earth, received the remission of their sins, and thus are determined to enter into Heaven. God’s final judgment would therefore depend on in which of the two books one’s name is written. God has already set, in other words, who would enter Heaven and who would be cast into hell.
God will therefore raise all the dead to live again, open His Books, and see in which of the two books their names are written. He will then send those whose names are written in the Book of Life to Heaven, but those whose names are not found in this Book of Life, in contrast, will instead be thrown into hell. We must make sure to know and believe in these established facts determined by God.
To decide who would be sent to Heaven and who would be sent to hell, God will resurrect all the dead and judge them. It has been decided by God that He would judge them according to whether their names are written in the Book of Life or the Books of Deeds (the Books of Judgment).
There are two places God has already established for all who would stand before Him. They are none other than Heaven and hell. Hell is the lake of fire where flames and brimstones are burning. God has determined that those whose names are not written in the Book of Life would be thrown into the lake of fire, while those whose names are written in this Book of Life would be welcomed into Heaven.
In Heaven, the Tree of Life stands by the river of water of life, bearing twelve different fruits according to each season. In this beautiful Heaven, the saints would have neither disease nor pain, but live happily forever with God. We must believe in the fact that God has decided to give this Heaven to the saints.
Those who do not believe in Jesus, on the other hand, have their names written in the Books of Deeds. Because all the deeds that the sinners had done while on this earth are recorded in these Books, God tells us that He would throw them all into the lake of fire, to punish them for their sins recorded in this Books, and for their sin of not believing in Jesus. What is of critical importance here is in which Book your and my names are written.
While living in this world, we must realize that life on this earth is not all that there is. As Psalm 90:10 tells us, “The days of our lives are seventy years; And if by reason of strength they are eighty years, Yet their boast is only labor and sorrow; For it is soon cut off, and we fly away.” Even if we were to live on this earth for 70 or even 80 years, sooner or later we will all stand before God. And when we thus stand before our Lord finally, all that matters is in which Book our names are written, whether in the Book of Life or the Books of Deeds (the Books of Judgment), for this will determine whether we are welcomed to Heaven or cast into the lake of fire. We must come to the recognition that life on this earth is not everything.

The Ones Whose Names Are Written in the Book of Life

Jesus Who Became the Way to Heaven

We must, then, know just how exactly Jesus have made all our sins disappear. Coming to this earth, Jesus was baptized by John the Baptist at the Jordan River (Matthew 3:13-17). He received His baptism from John the Baptist so that He could take upon all the sins of the mankind (including all yours and mine). Through the hands of John the Baptist, the representative of all mankind, every sin of the entire mankind was passed onto Jesus. After thus taking all the sins of the world onto Himself through John, Jesus then shed His blood on the Cross and died on it. He then rose from the dead in three days.
Our Lord has promised that whoever believes in Him will receive eternal life. God has determined that whoever believes in the truth that Jesus took upon all his/her sins on Himself and received all the punishment of these sins on the Cross would not be cast into the lake of fire, but would instead have his/her name written into the Book of Life.
Jesus says in John 14:6, “I am the way, the truth, and the life. No one comes to the Father except through Me.” The mankind must believe in Jesus who has become the way to Heaven. Jesus is our Savior. Jesus is our God. Jesus is the one and only real truth in this world. And Jesus is the Lord of life. To make sure that our names are written in the Book of Life and that we would thus be welcomed into the Kingdom of Heaven, we must all believe in Jesus.
Because Jesus actually took upon all our sins on Himself by receiving His baptism from John the Baptist at the Jordan River, we must believe in Him, the One who has become the Savior of atonement. And it is because Jesus completed all our salvation by being crucified and shedding His blood on the Cross as the punishment of our sins that you and I can now enter Heaven.
Jesus has decided who would be cast into the lake of fire. Those who do not believe and who are cowardly will all be thrown into the lake of fire. Not only will they themselves be cast into the lake of fire because of their unbelief, but so would their children and descendants to come. To reach one’s own spiritual and physical well-being, everyone must indeed and absolutely believe in Jesus.

What If Jesus Had Not Received His Baptism?