[11-5] How the Israelites Came to Give Offerings in the Tabernacle: The Historical Background (Genesis 15:1-21) 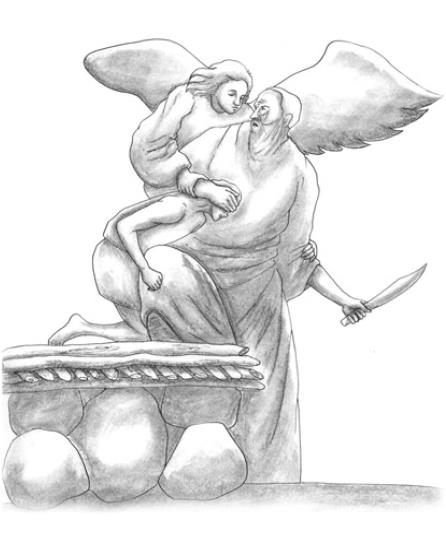 (Genesis 15:1-21)
“After these things the word of the LORD came to Abram in a vision, saying, ‘Do not be afraid, Abram. I am your shield, your exceedingly great reward.’ But Abram said, ‘Lord GOD, what will You give me, seeing I go childless, and the heir of my house is Eliezer of Damascus?’ Then Abram said, ‘Look, You have given me no offspring; indeed one born in my house is my heir!’ And behold, the word of the LORD came to him, saying, ‘This one shall not be your heir, but one who will come from your own body shall be your heir.’ Then He brought him outside and said, ‘Look now toward heaven, and count the stars if you are able to number them.’ And He said to him, ‘So shall your descendants be.’ And he believed in the LORD, and He accounted it to him for righteousness. Then He said to him, ‘I am the LORD, who brought you out of Ur of the Chaldeans, to give you this land to inherit it.’ And he said, ‘Lord GOD, how shall I know that I will inherit it?’ So He said to him, ‘Bring Me a three-year-old heifer, a three-year-old female goat, a three-year-old ram, a turtledove, and a young pigeon.’ Then he brought all these to Him and cut them in two, down the middle, and placed each piece opposite the other; but he did not cut the birds in two. And when the vultures came down on the carcasses, Abram drove them away. Now when the sun was going down, a deep sleep fell upon Abram; and behold, horror and great darkness fell upon him. Then He said to Abram: ‘Know certainly that your descendants will be strangers in a land that is not theirs, and will serve them, and they will afflict them four hundred years. And also the nation whom they serve I will judge; afterward they shall come out with great possessions. Now as for you, you shall go to your fathers in peace; you shall be buried at a good old age. But in the fourth generation they shall return here, for the iniquity of the Amorites is not yet complete.’ And it came to pass, when the sun went down and it was dark, that behold, there appeared a smoking oven and a burning torch that passed between those pieces. On the same day the LORD made a covenant with Abram, saying: ‘To your descendants I have given this land, from the river of Egypt to the great river, the River Euphrates—the Kenites, the Kenezzites, the Kadmonites, the Hittites, the Perizzites, the Rephaim, the Amorites, the Canaanites, the Girgashites, and the Jebusites.’”

Abraham’s Faith in the Word of God

I have great respect and admiration for the faith of Abraham shown in the Bible. When we look at Abraham’s faith, we can see all the travails of his faith through which he followed the Word of Jehovah, and we therefore cannot help but admire this faith of Abraham. God blessed Abraham greatly, as shown in Genesis 12:3, where God said, “I will bless those who bless you, And I will curse him who curses you; And in you all the families of the earth shall be blessed.” This great blessing is also shown in Genesis 15:1, where God declared to Abraham, “I am your shield, your exceedingly great reward.” God had such special love for Abraham that He became his own God.
After leading Abraham out from Ur of the Chaldeans, God revealed Himself before him, and said to him, “I am your shield, your exceedingly great reward.” When God said this, Abraham asked Him in return, “What will You give me?” These words of Abraham were not the words of disbelief coming from a skeptical heart questioning what God could possibly give him, but rather they contained Abraham’s earnest desire to be blessed by God. What, then, was this blessing that Abraham sought from God? This is revealed in what Abraham said to God: “What will You give me? Because I’m childless, my servant Eliezer of Damascus is my heir, as he will become my adopted son who would inherit all my belongings! What will You give me?” Here, we should understand how earnestly he yearned for his own son. Those who deliberately choose to have no children of their own perhaps cannot sympathize with Abraham’s earnest desire, but he truly yearned to have to his own son as his heir.
Just as God gives all His blessings to His children who are made in His image, people also have the earnest desire to give the very best to their own children. As such, when Abraham said to God, “my servant will be my heir,” we can all realize just how much he wanted to be blessed by God, so that he may have his own child as his heir. God then said to Abraham, “That’s not true. The one who will come from your own body will be your heir. The one who is born from the body of your wife will be your heir, not your servant Eliezer of Damascus.”
God then brought Abraham outside, and told him to look up the sky and count the stars. So Abraham looked up the stars. Countless stars and beautiful galaxies were strung across the skyline. When God told Abraham to count the stars and see if he could number them, Abraham answered that there were too many stars to count them all. God then promised Abraham that He would give him as many descendants as the stars in the sky.
Abraham believed in this Word of promise that God gave to him. This is how he became the father of faith who truly believed in all the Word of God. God thus said to him, “Your faith is right. You do indeed believe in my Word. I will therefore bless you by giving you as many descendants as the stars in the sky.”

Just as Abraham Believed in the Word of God, So Must We Believe in God Based on His Word

Abraham was blessed not because of his good deeds, but because of his faith in the Word of God. Through the Law, God has enabled us to know our sins, and through the sacrificial system of the Tabernacle, He has enabled us to receive the remission of all our sins by passing our sins onto the unblemished sacrificial offering and giving its blood to God. In the same manner, Jesus Christ, coming to this earth, took upon all our sins with His baptism, was judged for these sins of ours with His death on the Cross, and has forgiven us of all our sins by rising again from the dead. All our sins can be forgiven and we can become God’s children only by believing in this truth. The Bible tells us that only those who believe in this truth with their hearts can received all God’s blessings. By believing in the Word of God, we must make His Word of salvation, the most precious blessing found nowhere else in the entire world, our very own.
Why did Abraham receive abundant blessings from God? He was blessed because he believed in what God had told him. Even today, if you and I believe in the Word of God written in the Bible, we can all have the same faith of Abraham and receive many blessings of Heaven. This is not such a difficult thing to do. If we want to have the evidence that shows that we are the people of God, what we have to do is not trying to please God with our acts of devotion, but believe in His Word with our hearts.
God promised Abraham with His Word that He would give the land of Canaan to his descendants. All of us living in today’s time must believe that the four ministries of Jesus, which were manifested and prophesied by the Tabernacle’s blue, purple, and scarlet thread and fine woven linen, has saved us from all our sins. And by believing thus, we must receive the remission of our sins, become God’s children, and inherit the Kingdom of Heaven.
We must absolutely believe in His Word, because not a single one of God’s Word is in vain, and because His Word is all true and critically important to our faith. We must surely know His Word of the water and the Spirit, and we must believe in it without fail. Why? Because it is the absolute truth! Do you now believe? If you believe the truth with your hearts, and confess it with your mouths, you will be approved by God. “For with the heart one believes unto righteousness, and with the mouth confession is made unto salvation” (Romans 10:10). This is why faith is so important. And it is also of utmost importance to believe in the Word of God with all our hearts. What is critical for us is not believing in what men say, but in the written Word of God; and what is important for us is not believing in the Word with our own thoughts or emotions, but believing it as it is with our sincere hearts. This is why the servants of God and those who have been saved before are preaching the Word of God as it is.
With the mark of circumcision, God made His covenant with Abraham and his descendants and gave them the sacrificial system of the Tabernacle, so that they could believe in Jesus Christ, the Messiah to come, that would forgiven all their sins with His baptism and His blood on the Cross, and so that with this faith they could enter the Kingdom of God.
I believe in God’s Word of covenant. Not only Abraham was blessed by believing in the Word of God, but all of us can also be blessed, just like him, by believing in His Word. I believe that God built the Tabernacle to save us from all our sins. This is why God led the descendants of Abraham all the way to the Mountain Sinai and gave them the Law and the sacrificial system of the Tabernacle. We must all realize that this truth is the providence of God.
Terms and Conditions Privacy Policy Cookie Declaration Contact Us