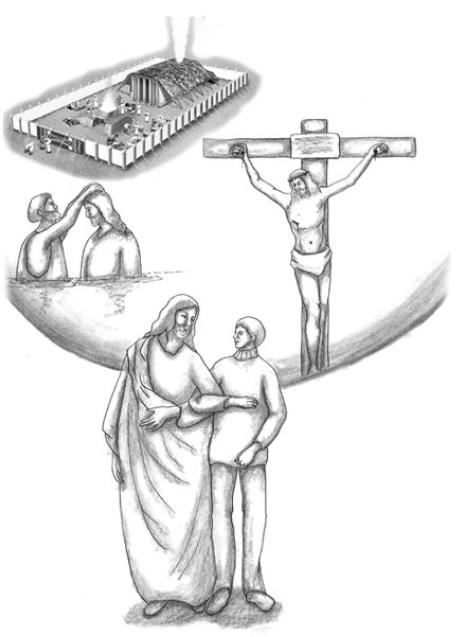 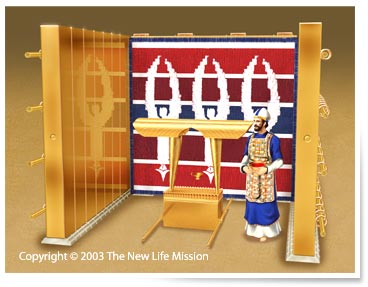 The Blue Thread Implies Exactly the Baptism That Jesus Received

Let us turn to Matthew 3:13-17: “Then Jesus came from Galilee to John at the Jordan to be baptized by him. And John tried to prevent Him, saying, ‘I need to be baptized by You, and are You coming to me?’ But Jesus answered and said to him, ‘Permit it to be so now, for thus it is fitting for us to fulfill all righteousness.’ Then he allowed Him. When He had been baptized, Jesus came up immediately from the water; and behold, the heavens were opened to Him, and He saw the Spirit of God descending like a dove and alighting upon Him. And suddenly a voice came from heaven, saying, ‘This is My beloved Son, in whom I am well pleased.’”
Through the offerings given under the sacrificial system of the Old Testament, God the Father actually showed that He would pass all the sins of the world onto His only begotten Son Jesus Christ. John the Baptist did in fact baptized Jesus to fulfill all the righteousness of God. Because the sins of the world were indeed passed onto Jesus as He was baptized by John, those who believe in this could have been remitted of all the sins of their hearts.
This baptism that Jesus received has a completely different meaning from the water baptism that people usually receive as a ritual to become Christians. In other words, the water baptism that today’s people receive is merely an outward sign of their conversion to the Christian religion. Jesus was baptized in the Jordan River to take upon all the sins of the world with the laying on of the hands of John the Baptist, the representative of mankind. The baptism that Jesus received was the baptism that fulfilled God’s promise of everlasting salvation, of the remission of sin that God established through the sacrificial system in Leviticus. That Jesus took upon the sins of the world by personally being baptized and bled to death on the Cross to pay the wages of these sins is God’s love for mankind and the perfect remission of sin.
It was to save us from all the sins of the world that God the Father made His Son be baptized by John. “Permit it to be so now, for thus it is fitting for us to fulfill all righteousness” (Matthew 3:15). “Thus” here means that Jesus would take upon the entire mankind’s sins of the world by being baptized. Because John baptized Jesus Christ, our sins were passed onto Him. It was because Jesus Christ had taken upon our sins with His baptism that He shed His blood and died instead of us. The baptism that Jesus received is God’s love of sacrifice and of the remission of sin. After He actually accepted all our sins passed onto Him, He submerged into water. That submersion implies His death. And that He came out of water testifies His resurrection in advance.

Jesus Is Our Creator and Savior