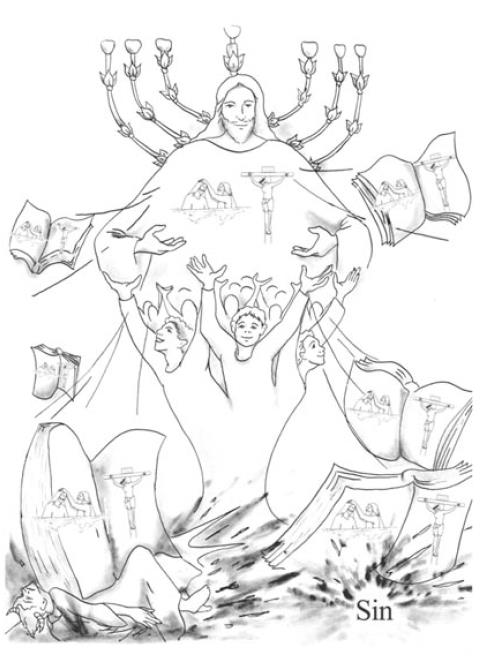 By gathering together, the righteous become the lampstand of the gospel and illuminate this world. The righteous shine the light of the gospel of the water and the Spirit. Life as the lampstand illuminating the dark world with the bright light of truth—this is our lives. It is when the righteous who have received the remission of sins become the ornamental knobs of the gospel that the flowers of faith are in the full bloom in this world, and it is when this happens that the gospel of the water and the Spirit is testified throughout the entire world. Without these ornamental knobs, there can never be flowers nor any lamp. The shaft of the lampstand had four bowls like almond blossoms, each with its ornamental knob and flower. It is when we become such ornamental knobs and fulfill the role that has been assigned to each of us that God’s Church can spring up everywhere and many souls can be saved from their sins. When we look at the lampstand, we see that there was another ornamental knob above one ornamental knob, and that above this knob there was yet another knob along the shaft. Like this, through your serving the gospel, the flowers of the gospel have been blooming so far, and the gospel will be preached throughout this entire world. You and I are these ornamental knobs. From hearing the gospel of the water and the Spirit to spreading this gospel throughout the world to this very day, we have done countless works as the ornamental knobs. This is how you can receive the remission of your sins and spread it to others as well.
We have done various works to carry out our roles as these ornamental knobs. For example, we built this chapel two years ago for our discipleship training and spiritual retreats. It took us about a month to build this sandwich panel building. When we built this building by faith, we thought, “Our brothers and sisters will come to this place for spiritual retreats, and many lost souls will come to our gospel classes, hear the Word, and receive the remission of sins.” Though we had faced many hardships while constructing this building, we were always keeping this thought in our minds, plowing through such difficulties and working faithfully in hope. This is how this discipleship training center was built, and how we have been able to worship in this warm and comfortable place. This was also made possible because of those who fulfilled the role of each ornamental knob. It is because you and I have become ornamental knobs that we can now worship in warmth even in this cold weather. Had there been no ornamental knob, these easy circumstances would never have come about. Before this chapel was built, this place had just been a desolate wilderness. If we were to gather in such a dreary place to hear the Word of God, would you have wanted to come? Too cold for worship service, you would probably have gone back home.
It is because ornamental knobs have been in place that we have been able to make the flower of the gospel bloom not only to this day, but we will also continue to do so in the future. There is a famous Korean poem titled, “Beside a Chrysanthemum,” and it goes,
“For one chrysanthemum to bloom,
The nightingale must have wept like that since spring.
For one chrysanthemum to bloom,
The thunder must have rolled like that in somber clouds…”
Indeed, the ornamental knobs of so many servants of God and so many saints have been placed to the tree of the gospel. To bring the gospel of the water and the Spirit to blossom, the workers who fulfill the role of such ornamental knobs have worked hard everyday. And below these ornamental knobs, the Lord has placed more bowls like almond blossoms so that we would fulfill this role of ornamental knobs even better. And God has also bestowed on us His grace in His time, giving us oil for the seven lamps. Knowing that we cannot do anything with our own strength, our Lord has clothed us in His grace through the Church, so that we would be able to fulfill the role of the ornamental knobs that serve the gospel. You must therefore realize that becoming these ornamental knobs does not mean that we can spread the gospel alone by our own strength. Rather, it is only by the grace of God that all of us have been glorified to become these ornamental knobs.
Those who received the remission of sin now and those who received it a while ago are all the same ornamental knobs that are to serve the gospel. The reason why they are all the same in spite of the differences in their spiritual levels is because they are all called as the ornamental knobs. Each and every one of us is an ornamental knob without any exception. Just preaching the Word spiritually while not lifting a finger in other works is not what the proper spiritual life is all about. Those who are truly spiritual can do anything if it benefits the gospel. “My church position is this, and so I only do these things. Since you received the remission of sins now, should you do these other things while I do just mine?” This is not right. When it comes to serving the gospel, there is no one higher or lower than anyone else. We must all unite together and become the fertilizer only for the gospel to blossom and bloom.