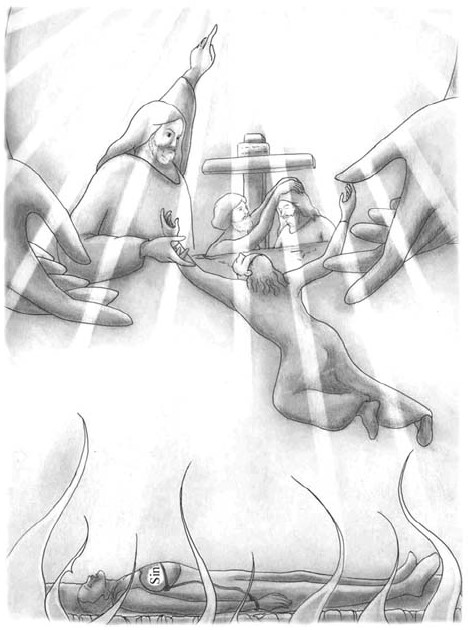 Jesus Is God to Everyone

In this age and time, when we watch TV, we often come across some religious leaders making their frequent appearances and saying, “I have forgiven your sins.” Since these people, as mere human beings, are saying such words as if they were God, we can only consider them as being extremely arrogant.
The scribes in today’s Scripture passage also thought like this, considering Jesus to be utterly arrogant. They didn’t say so in words, but Jesus still knew what they were thinking, and He told them that they thought evil in their hearts. He rebuked their evil thoughts by saying, “I said this so that you may know that the Son of Man has power on earth to forgive sins.” And He actually wanted everyone to realize that Jesus Christ who came as the Son of Man indeed had the power to forgive sins.
We say that someone is blasphemous when this person, in his arrogance and pride, does not know his proper place and tries to exalt himself beyond God. The scribes thought that what Jesus said was arrogant blasphemy because they did not believe that He was indeed God Himself and the Son of God. But this was only a reflection of their evilness, for Jesus was in fact God. Jesus is the Lord of all things who created mankind and the universe, and He is the Lord of all hosts, of all things that are found in the domain of this entire universe.
This is who Jesus actually is for us, but the scribes did not realize His standing. Jesus told them that they had evil thoughts because He knew that this was how they thought of Him. So He said, “I said what I said so that you may know that the Son of Man has power on earth to forgive sins. If I had instead said, ‘Son, rise up, pick up your bed, and go to your home,’ and if the paralytic got up, took up his bed and went to his home, perhaps you would have understood this. But this is not the case.”
Our Lord explained this by contrasting two different ways that He could have said, asking the scribes, “Which is easier, to say, ‘Your sins are forgiven you,’ or to say, ‘Arise and walk’?” Which do you think the scribes considered easier? It would have been acceptable for them had Jesus said, “Son, be healed from your paralysis, take up your bed and walk,” rather than saying, “Son, your sins are forgiven you.” But because Jesus was the Son of God, the Absolute Being, whose power was far greater than this, He said, “Your sins are forgiven you,” so that people may know that the Lord has the power to forgive the sins of mankind. It was to let them know that Jesus had this authority to forgive sins that He said this.
When we profess to believe in this Jesus, we all believe that He is the Creator who made the universe and the Savior who has saved us from all our sins. But actually, there are times when we lower His standing, because for God the Father, Jesus is His Son. However, although Jesus is indeed the Son of God, He Himself is in His essence God the Almighty also. Jesus is God Himself who has the power to forgive mankind’s sins, and He is our Savior. And Jesus Christ came to this earth and actually blotted out all our sins with His baptism and His blood on the Cross.
What is your understanding of who Jesus is, and how do you believe in Him in your hearts? Do you not, by any chance, believe in Jesus as the scribes had believed? When Peter believed in Jesus and made his confession of faith, he said, “You are the Christ, the Son of the living God.” How do you regard Jesus, and who do you believe He is? Do you really believe that Jesus Christ is the true God Himself? There is God the Father to Jesus Christ, but for you and me, Jesus Christ is the same God.

Have You Recognized Jesus Properly?

The Ruin of a Powerful Cult Founder