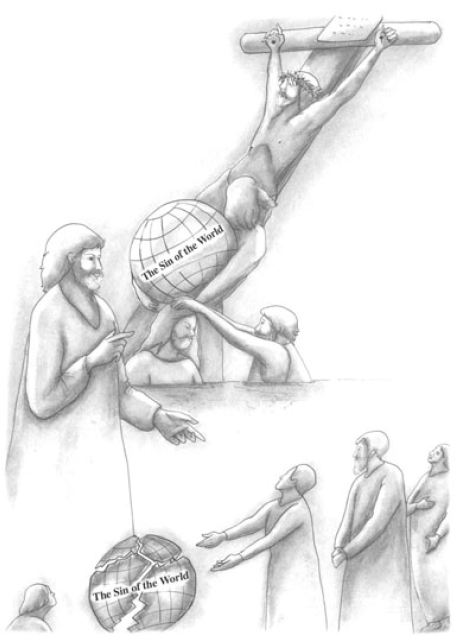 (John 1:29)
“The next day John saw Jesus coming toward him, and said, “Behold! The Lamb of God who takes away the sin of the world!”

Man Is a Brood of Evildoers

Jesus said in Matthew 15:19-20, “For out of the heart proceed evil thoughts, murders, adulteries, fornications, thefts, false witness, blasphemies. These are the things which defile a man, but to eat with unwashed hands does not defile a man.” The Lord also said in Matthew 15:8-9, “These people draw near to Me with their mouth, and honor Me with their lips, but their heart is far from Me. And in vain they worship Me, teaching as doctrines the commandments of men.” In Matthew 15:3, He said, “Why do you also transgress the commandment of God because of your tradition?” These passages mean that many people are worshiping God in vain, for they honor God only with their lips and teach the commandments of men as doctrines. The commandments of men set the Word of God aside, and so it also means that even though these people claim to believe in God with their words, they don’t actually obey the Word of God.
Most people think that they are good, decent human beings. They think that they were born as good human beings and that they commit sin only because of bad circumstances, but this is all nothing more than their own delusion. It saddens me deeply that so many people do not realize just how evil they are, how by nature they were born as a brood of evildoers. Although the Bible teaches us that we should honor our parents, we are not capable of practicing it fully. In other words, people practice the Word of God only with their lips, not with their acts.
Everyone is supposed to honor their parents and take care of them in their old age. However, many people don’t really want to provide for their parents, and so they come up with all kinds of excuses to justify their greed, claiming, “I am sorry for not giving you your necessities, father. I offered my possessions to God.” The Word of God teaches us how people invoke the name of God to satisfy their own greed.
When Jesus’ disciples ate food without washing their hands, some of the Jews criticized them along with Jesus, saying, “You are so filthy! How can you eat without even washing your hands?” Jesus then said to them, “It is not what enters the mouth that defiles a man, but it is what comes out of the mouth that defiles a man.” Jesus thus rebuked those who were criticizing His disciples and taught them about human nature.