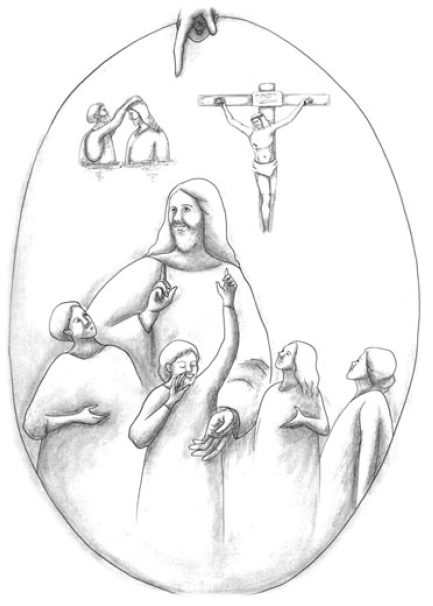 (John 2:1-11)
“On the third day there was a wedding in Cana of Galilee, and the mother of Jesus was there. Now both Jesus and His disciples were invited to the wedding. And when they ran out of wine, the mother of Jesus said to Him, ‘They have no wine.’ Jesus said to her, ‘Woman, what does your concern have to do with Me? My hour has not yet come.’ His mother said to the servants, ‘Whatever He says to you, do it.’ Now there were set there six waterpots of stone, according to the manner of purification of the Jews, containing twenty or thirty gallons apiece. Jesus said to them, ‘Fill the waterpots with water.’ And they filled them up to the brim. And He said to them, ‘Draw some out now, and take it to the master of the feast.’ And they took it. When the master of the feast had tasted the water that was made wine, and did not know where it came from (but the servants who had drawn the water knew), the master of the feast called the bridegroom. And he said to him, ‘Every man at the beginning sets out the good wine, and when the guests have well drunk, then the inferior. You have kept the good wine until now!’ This beginning of signs Jesus did in Cana of Galilee, and manifested His glory; and His disciples believed in Him.”
Everything Is Grace of God
Both hardships and glad things that occur when we follow the Lord are the grace of God. Whatever occurrences we get to face or suffer in every aspect of our lives, they are all God’s grace. In all the things of this world, we must acknowledge Jehovah God. “In all your ways acknowledge Him, And He shall direct your paths” (Proverbs 3:6). God speaks to us like this. It isn’t fitting for us the righteous to hold someone else responsible for hardships when we face them. When we go through some bad event, we tend to resent and fret, displaying our temper before all else. With the thought, “If someone hadn’t done so, I would not have become like this,” one winds up blaming someone else. But with the passage of time, when the person looks back at that event, that person will realize all of it had been something God had said in our lives amidst silence. The person will discover that it had been the voice of God.
Thus, God is the One who governs all our ways. According to the Word of God, we should be acknowledging Jehovah God in all our ways.
The Joy of Shortage
There was a wedding feast in Cana of Galilee, and Jesus, His mother, and the disciples were invited to the wedding. But, there was a shortage of wine. Because of the shortage of wine, there was also a shortage of joy for those who had been invited to the wedding feast.
Dear fellow believers, just exactly what do you think this Scripture passage means? This Scripture passage metaphorically speaks of the fact that among those who believe in Jesus, there are people who aren’t able to gain joy like those invited to the wedding. According to our thoughts, it is easy to think that the Bible is the Book of gospels for people who do not believe in Jesus. But in fact, the Bible, in many aspects, is the Book that introduces Jesus anew to those who already believe in Him. Evidently, this Scripture passage also is an instance of something like that. It speaks to believers like us who have the faith of believing in Jesus.
There was a wedding feast in a region called Cana of Galilee. Jesus, His mother, and the disciples went there. Besides them at the house of the feast, there were numerous distinguished guests invited there and sharing seats. As with all places of celebration, joy was all so abundant there also. But, it is said that the place ran out of wine.
In the Bible, grape vines and wine often imply the life of a soul or the joy of a soul. It means that the Word expresses a person’s life or true joy with grape and wine. In other words, the expression that there was no wine precisely means that true joy of soul was lacking. This Scripture passage implies just how great is the number of Christians who haven’t yet perfectly received the remission of sins and therefore lack joy despite their faith in Jesus. Through the tale of the wedding feast in Cana of Galilee in the Gospel of John chapter 2, God is telling us today how those who haven’t been able to receive perfect salvation and gain perfect joy and eternal life get to obtain all that salvation, joy, and life.

The Way to Obtain Perfect Happiness

We Must Fill Our Heart with the Word of God

The Meaning of the Baptism That Jesus Received

We Must Be under the Lord’s Governing