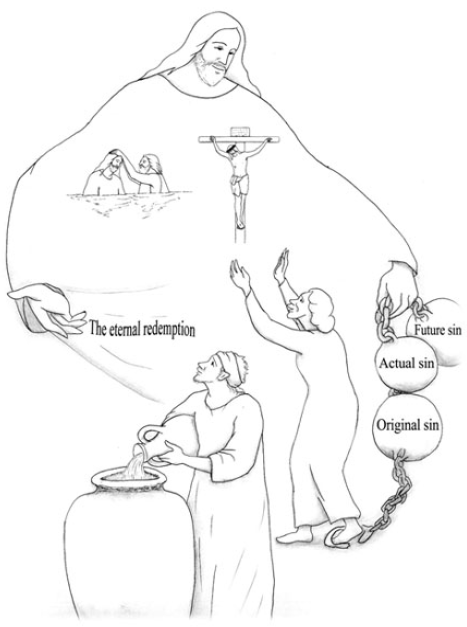 (John 2:1-11)
“On the third day there was a wedding in Cana of Galilee, and the mother of Jesus was there. Now both Jesus and His disciples were invited to the wedding. And when they ran out of wine, the mother of Jesus said to Him, ‘They have no wine.’ Jesus said to her, ‘Woman, what does your concern have to do with Me? My hour has not yet come.’ His mother said to the servants, ‘Whatever He says to you, do it.’ Now there were set there six waterpots of stone, according to the manner of purification of the Jews, containing twenty or thirty gallons apiece. Jesus said to them, ‘Fill the waterpots with water.’ And they filled them up to the brim. And He said to them, ‘Draw some out now, and take it to the master of the feast.’ And they took it. When the master of the feast had tasted the water that was made wine, and did not know where it came from (but the servants who had drawn the water knew), the master of the feast called the bridegroom. And he said to him, ‘Every man at the beginning sets out the good wine, and when the guests have well drunk, then the inferior. You have kept the good wine until now!’ This beginning of signs Jesus did in Cana of Galilee, and manifested His glory; and His disciples believed in Him.”
The Miracle That Also Occurs in Our Souls
At the wedding reception in Galilee, our Lord performed the miraculous work of turning water into wine. With this miracle our Lord provided all the wine that was needed for the wedding reception. The servants at the wedding feast could experience this miracle because they wanted to believe in our Lord and obey Him; they abided in faith and they fully accepted the Word of God ordering them to fill the jars with water.
Likewise, if we also want to witness the amazing work of God, then we must first believe in the God who has come by the gospel of the water and the Spirit; we have to have the faith to obey and believe in the Word of God even if it does not fit into our thoughts, and thus accept God’s Word. Such miracles and blessings will then also arise in our souls.
That Jesus told the servants to fill six waterpots of stone with water up to the brim means that He is telling us to fill our hearts with the Word of God. When we fill our spirits with the gospel Word of the water and the Spirit, we are saved, just as the servants saw the amazing miracle of water turning into wine. Freed from curses and destruction, we are blessed to receive everlasting life and become God’s children. Today, I would like to share the Word with you with my sermon titled, “Fill the Waterpots with Water.”
What did our Lord do to save us from all our sins? To save you and me, Jesus, God Himself, came to this lowly earth incarnated in the flesh of man. About 700 years before Jesus came to the domain of man, God had promised to send Him through the Prophet Isaiah, saying, “Therefore the Lord Himself will give you a sign: Behold, the virgin shall conceive and bear a Son, and shall call His name Immanuel” (Isaiah 7:14). This Son who was conceived in the body of the virgin also refers to none other than “her Seed” (Genesis 3:15) whom God had promised to Adam and Even, the ancestors of mankind, before they were cast out of the Garden of Eden for their fall. All the descendants of Adam are sinners, and that is why Jesus was conceived by the Holy Spirit and born by a woman, so that He would be born a Man but without any sin. Who is this woman Mary then? She was from the tribe of Judah, one of the twelve tribes of Israel. Her fiancé Joseph was also from the tribe of Judah from the royal lineage: Of the twelve tribes of Israel descended from the twelve sons of Jacob, the tribe of Judah was the royal lineage. God had promised in the Old Testament that He would bring forth Jesus through the lineage of Judah, and exactly according to this promise, Jesus was indeed born through the Virgin Mary who was from the tribe of Judah.
When our Lord came to this earth, He came as the King of kings to save us from all sins. Our Lord was not born in the household of Aaron the High Priest. Aaron the High Priest’s descendants were still existing at that time, and so the Lord did not come as an earthly priest, but through the tribe of Judah He came as the King of the Kingdom of Heaven and the heavenly High Priest. John the Baptist, who was born into the world before Jesus, testified that Jesus would come, and according to this witness, as well as the promise of the Old Testament, Jesus indeed came to this earth to save us. Our Lord is telling us to fill our hearts with His work of salvation that has saved us from all sins, just as the jars were filled with water.

Let Us Fill Our Hearts with the Work of Our Lord

We Must Become the Waterpots of Miracle

What are the sins of the world that God speaks of in the Bible? You must have a clear conceptual understanding of this question. The sins of the world God speaks of are all the sins that have ever been committed and will ever be committed from the beginning of the earth to its end. However, because I did not have a clear concept of the sins of the world, I just thought that only the original sin I inherited from my mother’s womb belonged to the sins of the world. It was a big headache for me to think of sins in different categories, dividing them into original sin, personal sins, future sins, presumptuous sins, and so forth.
The more I learned about the Bible, the worse my headache got. So I began to think that it was because God had chosen me before the foundation of the world that I came to my senses when I turned 20 and believed in Jesus. I thought that the reason why I didn’t drink, didn’t smoke, but was such a good Christians was all because I was chosen, and so I focused only on this aspect, even though this was not true in reality.
Some pastors say that if you commit any sin consciously, you can’t be remitted from this sin. So I myself also thought, “It would have been better if I didn’t know Jesus. I would have been so much happier if I didn’t know Him at all. My life got ruined the moment I believed in Jesus. I’m all ruined now!” I thought that I made a huge mistake in believing in Jesus; if I waited until my deathbed before believing in Jesus, then I wouldn’t have been tormented by my personal sins and entered Heaven scot-free. However, my conceptual understanding of the sins of the world began to change. I realized that the sins of the world included all my personal sins as well, and that all these sins I committed in my twenties and thirties now belonged to Jesus Christ. Did I then still have sin or was I sinless? I was sinless!
The Truth is not too far away, nor is it that complicated. It is in fact very simple. Jesus Christ, the Lamb of God who took away the sins of the world, could carry them to the Cross precisely because He had been baptized in the Jordan River and had thus accepted all our sins. The Old Testament speaks about this― Jesus took away all our sins in this way. But I didn’t realize this when I first believed in Jesus at 20. So you can imagine just how much I suffered until I reached a clear understanding of the concept of the sins of the world. I even tried to commit suicide, thinking to myself, “My life is all but ruined from believing in Jesus.” It’s all because I saw myself becoming even more of a sinner the more I believed in Jesus. My heart was so tormented.
But the Lord bestowed me His Truth so that I could reach a clear understanding on the concept of the sins of the world. Jesus had taken away all the sins I committed until 30. “Oh, Jesus bore my sins in the Jordan River and took them away!” Where did Jesus go carrying my sins? He went to the Cross and was crucified. He bore my condemnation instead of me, blotted out my sins, and passed away saying, “It is finished!”
Even though I was in my mid-forties, I realized that when Jesus took away all my past sins, He took away all my future sins as well. What an amazing Truth and wonderful salvation it is! That is what our Lord is saying to us. He is telling you and me that He took away all our sins of this world, blotted them all out, and completely fulfilled our salvation. Do you believe in this? Once I began to read the Bible after realizing this, it was such a joy to read the Scriptures. Every time I read the Bible, it became my nourishment, and my heart was planted with joy and a renewed mind.
Saying to us, “I have taken away the sins of this world,” our Lord is telling us to believe in this. What an amazing truth it is! Do you then still have sin? No, there is no sin. Those who can say that they have no sin belong to a special tribe. They are true Christians. It is the weak who receive the remission of sins. In other words, it is the grave sinners that can be remitted from their sins. We were all destined to hell, and yet by believing in Jesus Christ, we have received the remission of sins. That is the essence of what the Lord is saying to us. Our Lord is telling us to let our hearts be filled with the Truth that the Lord took away all our sins.
Let’s turn to the Word here and read Hebrews 10:10 together: “By that will we have been sanctified through the offering of the body of Jesus Christ once for all.” The will of God was to remit away all the sins of mankind, and as Jesus Christ offered His body once, we were made holy. Our Lord wants us to accept this Truth into our hearts.