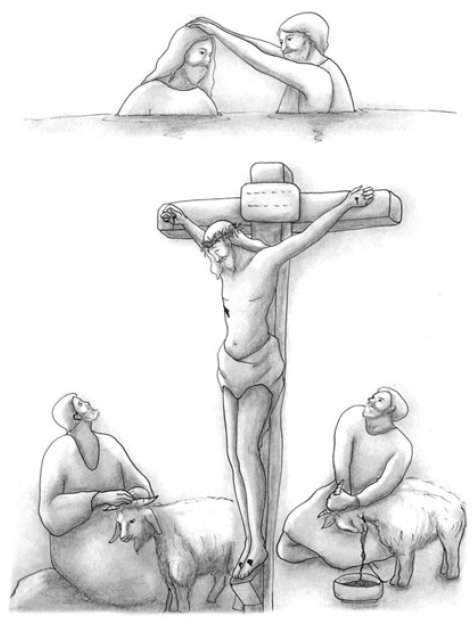 The Love of God Is Manifested by Jesus, Who Was Baptized by John and Who Shed His Blood for Us

About 2000 Years Ago, Jesus Blotted out the Sins of the World through the Baptism He Received from John and His Blood Shed on the Cross

Let’s turn to John 19:17-20. “And He, bearing His cross, went out to a place called the Place of a Skull, which is called in Hebrew, Golgotha, where they crucified Him, and two others with Him, one on either side, and Jesus in the center. Now Pilate wrote a title and put it on the cross. And the writing was: JESUS OF NAZARETH, THE KING OF THE JEWS. Then many of the Jews read this title, for the place where Jesus was crucified was near the city; and it was written in Hebrew, Greek, and Latin.”
Jesus was crucified on a hill called Golgotha. According to the Scripture, He was crucified at 9 o’clock A.M., and agonized for 6 hours on the Cross. When He was about to die, He said, “I thirst!” Then, people filled a sponge with sour wine, put it on hyssop, and put it to His mouth. After receiving the sour wine, He said, “It is finished!” and passed away (John 19:28-30). And Jesus Christ rose from the dead in three days and ascended to Heaven. By doing all these things, He completed all the salvation of mankind.