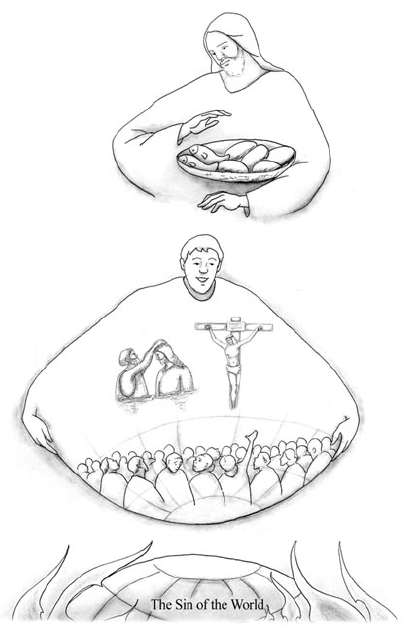 The flesh of Jesus signifies that Jesus shouldered our sins on His body by receiving His baptism, gave up His body to be crucified, shed His blood to death, rose from the dead again, and has thereby become our true Savior. By taking our sins upon His own body all at once, and by bearing the condemnation of these sins once and for all, Jesus has saved us perfectly from all our sins. The body of Jesus is the bread of life.
And the blood of Jesus is the true drink. From a certain point of view, the Bible may seem nothing more than a historical record of the people of Israel, but in reality, it is the Word of God that writes about the flesh and blood of Jesus that God has given us to bring life to the entire human race. Each chapter of the Bible contains the Word of life that God wants to speak to us. So if anyone has the accurate knowledge of what the Word of God is saying to him, he can be saved from all his sins.
Andrew said to Jesus, “There is a lad here who has five barley loaves and two small fish, but what are they among so many?” The two small fish here refer to God’s Church. Like these fish, God’s Church is also unimpressive in its outside appearance. Nonetheless, it is God’s Church that is now preaching the gospel of the water and the Spirit to everyone living on this earth. Thanks to the gospel of the water and the Spirit that we are spreading now, many people in this age are able to eat the flesh of Jesus and drink His blood. Because we are sharing this genuine gospel with the entire population of the world, of the more than 7 billion people living in this world, those who believe in this gospel are receiving the remission of their sins. Right now, God’s Church is a small gathering in number. Some people may question how much could possibly be achieved through such a small number of ministers and saints, and the few coworkers scattered around the world, but because the Lord holds God’s Church steadfast and works through it, He is saving everyone in the world from its sins. Our Lord has given the bread of life to those of us who believe in the gospel of the water and the Spirit.