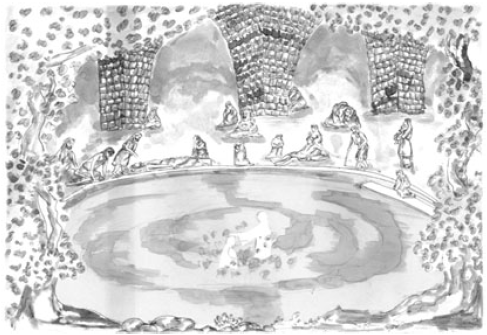 (John 9:1-12)
“Now as Jesus passed by, He saw a man who was blind from birth. And His disciples asked Him, saying, ‘Rabbi, who sinned, this man or his parents, that he was born blind?’ Jesus answered, ‘Neither this man nor his parents sinned, but that the works of God should be revealed in him. I must work the works of Him who sent Me while it is day; the night is coming when no one can work. As long as I am in the world, I am the light of the world.’ When He had said these things, He spat on the ground and made clay with the saliva; and He anointed the eyes of the blind man with the clay. And He said to him, ‘Go, wash in the pool of Siloam’ (which is translated, Sent). So he went and washed, and came back seeing. Therefore the neighbors and those who previously had seen that he was blind said, ‘Is not this he who sat and begged?” Some said, “This is he.’ Others said, ‘He is like him.’ He said, ‘I am he.’ Therefore they said to him, ‘How were your eyes opened?’ He answered and said, ‘A Man called Jesus made clay and anointed my eyes and said to me, ‘Go to the pool of Siloam and wash.’ So I went and washed, and I received sight.” Then they said to him, ‘Where is He?’ He said, ‘I do not know.’”
These Scripture passages speak of Jesus, as He was passing by, coming across a man who was blind from birth and making his eyes open.
A blind person would feel immensely stifled and stuffy for not being able to see what is in front. This man mentioned in today’s Scripture passage was blind from birth, so from a fleshly perspective, don’t you think that his life was so very cursed? Being born blind from birth, it must have been very hard on him in itself. Yet, the disciples went so far as asking, “Rabbi, who sinned, this man or his parents, that he was born blind?” Then, how deeply was he hurt by such words? However, the disciples of Jesus and the people near by asked Jesus carelessly about the cause of his blindness as if that was none of his business. He didn’t become blind because he wanted to, yet he has to live a stifling life for the rest of his life. And so, if has the understanding that he has to go on living as a blind all through his life because of his parent’s sins, because of a certain person, or because of someone else, this blind man would perhaps go on living resenting that person all through his life. Anyway, the stifled feeling the blind person has to go through because of people’s finger pointing must be so great that it cannot be put into words.

Why Are Human Beings Born as the Spiritual Blind?

The Lord said, “Neither this man nor his parents sinned, but that the works of God should be revealed in him,” (John 9:3). This means that he had become blind in order to reveal the works of God. Thus, all that the blind man has to do is to see what sort of work God wants to reveal, instead of resenting his parents or someone else.
Then, what does the passage that states this blind man had to have been born as a blind from birth mean? This passage means that it was the will of God for everyone to be born fundamentally as a sinner when he or she is born onto this earth. The Bible says that everyone is born as a sinner from birth just as everyone has become a sinner because of the sin of one man, Adam (Romans 5:12). Therefore, what else could a sinner be except a spiritual blind fundamentally? How stifling is it to be spiritually blind? Even though the eyes of the flesh are open, because the spiritual eyes are closed, a person is blind; and even though the person reads the Bible, that person is unable to realize the genuine gospel of the water and the Spirit. Like so, such a person does not know the meaning and the intention of the Word of God, and so, how stifling could this be to the person? From birth, people are spiritually blind, and since the blind cannot know the Word of God on his or her own, they must truly be stifled to death.
Yet, to His curious disciples, our Lord answered, “Neither this man nor his parents sinned, but that the works of God should be revealed in him.” What then do you think exactly is the work that God wants to reveal? If a person is to remain as a spiritually blind person, prior to knowing its reason clearly, all that the person can do is to lead a life filled with riddles.
Why did people have to be born as sinners into this world from birth? Why was it that they could not but be born as fundamental sinners? If we were to interpret this Word outspokenly, I cannot but say that the reason for people being born as sinners is to reveal the glory of God. It means that this was included in God’s plan. If so, we must find out what sort of a plan toward us that plan of God was.

All Humans Were Sinners before God

Why did the Lord say to the blind man to go and wash in the pool of Siloam? We know the Apostles appear in the New Testament. The word ‘Apostle’ means one sent by God. Siloam also means ‘sent.’ To receive the genuine remission of sins, one must go and wash in the water with which Jesus received the baptism. A person doesn’t just get well by going and washing in the pool of Siloam not knowing anything about the Truth. Of course, the blind man was healed because he had obeyed the Lord’s word, but in actuality, our Lord had given the sinner the remission of sin, which allowed the sinner to be healed from the sickness of sins, by spitting on the ground and making clay with the saliva. We have received the remission of sins by believing in this.
Only when people meet God’s servants who have received the remission of sins, that is, those who have been sent by God, they can clearly find out that they are truly sinners and that if they die now, they will go to hell. After that, they must listen to the gospel of the water and the Spirit that God’s servants tell them. Like so, only by listening to the gospel of the water and the blood with which our Lord has made us be born again, does one receive the remission of sins and has his eyes open up brightly. Just as the blind man had his eyes open up perfectly after being pasted with the clay made with Jesus’ saliva and then washing his eyes in the pool of Siloam, we must also open our spiritual eyes by believing in the gospel of the water and the Spirit in which Jesus had received the baptism and died vicariously on the Cross for us. The Lord is telling us this. Can you understand it?
No matter how atrocious and wicked a sinner may be, if that person were to hear and believe in the gospel of the water and the Spirit told by those who have been born again by the gospel of the water and the Spirit, the person can receive the remission of sins. Just as the blind man cannot read the Bible even if he tried, a sinner can neither interpret the Word of God by himself or herself nor understand the Truth contained in the Bible. For this reason, such a person must listen to and believe in the Word of God told by those who have truly been born again by believing in the gospel of the water and the Spirit.
In the Second Book of Kings chapter 5, a commander named Naaman appears. He was the commander of the army of Syria, and he was a great and honorable man in the eyes of his master because he once had given victory to the king of Syria. He was also a mighty man of valor, but a leper. Although he had all the things necessary on this earth, he was in misery because of this sickness. And so, to heal his sickness, we went to find Elisha, a servant of God. According to Naaman’s thinking, the leprosy would get healed only if Elisha were to come personally, place his hands on his head, and pray in tongues, saying, “La-di-la-di Lal-la.” So he came riding a long way to Israel.
But Elisha not only did not meet the commander Naaman but instead, through his servant named Gehazi, told Naaman to go and wash in the Jordan seven times. At first when Naaman heard this, he got angry. From a human perspective, he had every reason to be angry, for Elisha had passed on only the necessary words by sending a mere servant instead of coming out to welcome him, a commander of the army of a big country. And so, he tried to return to his country.
But at that moment, one of the servants dissuaded him from doing so. The servants persuaded the commander Naaman by saying, “My father, if the prophet had told you to do something great, would you not have done it? How much more then, when he says to you, ‘Wash, and be clean’?” The servant was telling Naaman to just try it once, for it would not be too late go back to Syria, bring the army, and then annihilate this country, should his words turn out to be nothing but lies. Hearing those words, the commander Naaman judged that they have some truth in them. Then, saying, “Well, I’ll try it once,” he went to the Jordan River, took off his clothes, and washed himself seven times. Just then, his leprosy was healed, and his flesh was restored like the flesh of a little child.
Like this, the sins of people can only be cleansed by the water and the blood, not by speaking in tongues or some wonders. Thus, the waters of the Jordan River through which one receives the cleansing of sin are written in the Old Testament. This gospel of the Jordan River is the secret of Jesus’ baptism, being born again, and the remission of sins. What that can save sinners from all their sins is precisely the gospel of the water and the Spirit.

You Must Believe in the Gospel of the Water and the Spirit to Be Born Again.