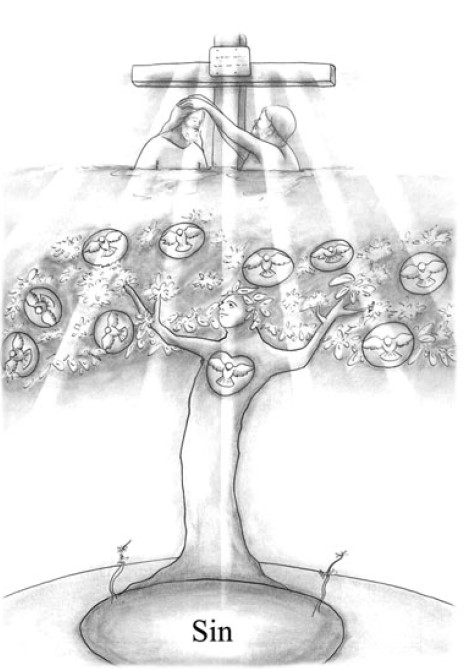 (John 15:1-9)
“I am the true vine, and My Father is the vinedresser. Every branch in Me that does not bear fruit He takes away; and every branch that bears fruit He prunes, that it may bear more fruit. You are already clean because of the word which I have spoken to you. Abide in Me, and I in you. As the branch cannot bear fruit of itself, unless it abides in the vine, neither can you, unless you abide in Me. I am the vine, you are the branches. He who abides in Me, and I in him, bears much fruit; for without Me you can do nothing. If anyone does not abide in Me, he is cast out as a branch and is withered; and they gather them and throw them into the fire, and they are burned. If you abide in Me, and My words abide in you, you will ask what you desire, and it shall be done for you. By this My Father is glorified, that you bear much fruit; so you will be My disciples. As the Father loved Me, I also have loved you; abide in My love.”
In today’s Scripture reading, our Lord is telling us that He is the vine and God the Father is the vinedresser. And He tells us that we are the branches attached to this vine. The Lord also said here that God the Father removes and discards every branch that does not bear fruit, while He prunes every branch that bears fruit so that it may bear even more fruit. The Lord is pleased by the branches that bear much fruit.
A fruit tree does not have the luxury of choosing whether to bear fruit or not. Every fruit tree must bear fruit, for that is its reason of being. A fruit tree that does not bear any fruit is completely useless. Such trees are good for nothing except for firewood.
Let’s think about some kinds of fruit trees such as pear trees, apple trees and vines. Is there any use for these trees other than harvesting fruit from them? Can you build a house with pear trees? Can you use apple trees or vines as construction materials? No, fruit trees are useful because of the fruits they bear; they are completely useless as construction materials. Compared to other trees, they have too many forking branches, and because all the nutrients go to the fruit, the trunk itself is too weak to support the weight of a building. In particular, apple trees and pear trees are so weak that sometimes the branch itself breaks off if it bears too much fruit. So the orchard farmer prunes the branches when the fruit tree blossoms or begins to bear fruit.
The Lord said, “I am the true vine, and My Father is the vinedresser” (John 15:1). The Father, who is the vinedresser cultivates the vine. He cuts off the branches that do not bear any fruit, and He prunes the branches that bear fruit so that they would bear even better fruit. This passage implies that the fruit of the Spirit is absolutely indispensable to everyone born again through the gospel of the water and the Spirit. In other words, once you are born again, you don’t have a choice whether to bear the fruit of the Spirit or not. You cannot lead your life of faith as a spectator watching far away, nor can you sit idle, but instead, you must bear abundant fruit as a healthy fruit tree does.
Is it okay for you not to preach the gospel of the water and the Spirit even as you say that you’ve been born again through this gospel and claim to be leading your life of faith in this gospel? No, this is not acceptable. You must bear the fruit of the soul. In other words, you must give birth to spiritual children by preaching the gospel. Even if you don’t preach yourself, you must at least be united with God’s Church and participate in its work of saving the lost souls through the gospel of the water and the Spirit. You have the duty to counsel them and teach them by their side so that they would listen to the Word and accept it by faith. And once they are saved, you must nurture them so that they would grow and mature appropriately. You also have to support the newly born-again souls so that they may also bear spiritual fruit. That is how the fruit of the Spirit is born.
Just as every fruit tree is supposed to bear fruit; it makes no sense for any believer to lead a life of faith without bearing any fruit. Perhaps some believers have succumbed to self-complacency thinking that everything is just fine since they themselves have received the remission of sins and will therefore go to Heaven, but it’s immensely frustrating for me whenever I see such believers who are so insensitive to the need to bear fruit. It’s even more saddening that there are some believers who think that since they have received the remission of sins from God, all that matters now is that they get blessed for the remainder of their lives, and also think that they are not suitable for bearing fruit. If there is anyone here who thinks, “I just want to attend church and do my own thing. It should be good enough that I attend church regularly; I don’t have to bear that much fruit,” this person must turn his heart around right now.

The purpose for which we lead our lives of faith is to bear fruit. It’s also ultimately to bear more fruit of the soul that we serve the gospel of the water and the Spirit in our lives of faith. In other words, it’s to bear the fruit of the Holy Spirit. Everything we do, from evangelizing to preaching the Word, leading our lives of faith, coming to the Church to listen to the Word, and growing our faith, is done to bear the fruit of the Holy Spirit. It’s invariably to bear the fruit of the Holy Spirit that we live out our faith. The life of faith is not lived purposelessly, but it’s lived to rise up to the challenge by faith and bear even more fruit of the soul. None other than this, to rise up to the challenge and bear spiritual fruit, is what the life of faith is all about.
As I said, your life of faith is all about bearing spiritual fruit by believing in the Word of God. If you are leading a dry and dull life of faith and aimlessly wasting away every day without any purpose, then you cannot bear any fruit even if you abide in the vine—that is, no matter how long you lead your life of faith. Whenever you hear the Word spoken to the Church by the Holy Spirit, you must listen attentively to and learn from what God is saying to you, what He is teaching you, and what He is asking you to do.
When you read the Bible by yourself, you can understand what the passages mean because you have the Holy Spirit in you. It’s because the Holy Spirit brings understanding to you. Instead of just reading the Bible pointlessly, you hold in your heart the passages that you read; as a result you come to have faith the size of a mustard seed; and in turn, this little faith achieves amazing results, even moving a mountain. The power of faith is that astonishing.
For that reason, your life of faith must be centered on the Word of God, and those who stand on this Word of God firmly in their lives of faith are infallibly bound to abide in the vine and bear abundant fruit. This is an absolutely assured outcome. Even if you don’t want to bear any fruit, so long as you are firmly attached to the vine, you will absorb and imbibe the nutrients coming from its roots, and therefore you will bear fruit naturally. Whoever abides in the gospel of the water and the Spirit and believes in the Word of God will invariably blossom and bear fruit like this. This will happen without fail. And that is why all of us must lead our lives of faith centered on the Word. You cannot bear any fruit unless your life of faith is based on the Word. How can anyone bear any fruit by himself? How can you bear any fruit all on your own without believing in and holding onto the Word of God? It’s impossible.

False Fruit Is More Prevalent in the So-Called “Orthodox” Churches