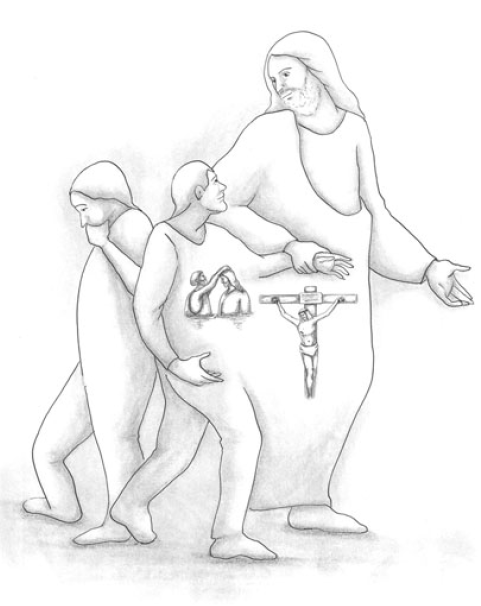 On this Passion Week, I’d like to ask you to think about your spiritual condition rather than the suffering of Jesus. Ask yourself whether or not you are becoming like Judas. Even among Christians professing to believe in Jesus as their Savior, there are many who are like Judas. It’s not true that they don’t know who they really are. They are just deceiving themselves even as they know it. So they must stop deceiving themselves, turn around from wickedness, return to God and surrender themselves to Him as soon as possible, and believe that Jesus is God Himself with thanksgiving. And they must receive all the blessings God is offering them. If you are such a nominal Christian, I admonish you to turn around from the wicked way as soon as possible. Why would you want to be used for wickedness like Judas? I hope and pray that you would turn around and return into the Lord’s arms.
Depending on whom we follow, we may be used for evil purposes or good causes. It’s akin to what happens in school: If a student falls into the wrong crowd in school, this student will go astray, but if he befriends good students, he will do well in school. Likewise, if you befriend good people, you will also become such a good person, but if you befriend charlatans, then you will also turn into a charlatan.
Above all else, you must not allow yourself to be used for evil purposes only to be cursed and destroyed forever like Judas, even as you believe in Jesus. You can prevent this beforehand if only you don’t deceive yourself. If you know that you’ve gone astray, then all that you have to do is just admit this, rebuke yourself, and repent from your old way to return to the righteous path. You only have to turn yourself to the right direction, and believe in and follow what is right. You can then become a perfect person.
Someone who follows his instincts is no different from a beast. The Book of Jude also writes that those who trust and follow just their own instincts are like brute beasts (Jude 1:10). If there is anyone who is like Judas among our ministers, workers, and saints in the Church, I hope and pray that all such people would repent, turn around, and believe in and follow Jesus as the Son of God and their Savior.
In some ways, Judas Iscariot is a pitiful man. What happened to Judas after he was used by the Devil is clearly explained in Matthew 27:3-5: “Then Judas, His betrayer, seeing that He had been condemned, was remorseful and brought back the thirty pieces of silver to the chief priests and elders, saying, ‘I have sinned by betraying innocent blood.’ And they said, ‘What is that to us? You see to it!’ Then he threw down the pieces of silver in the temple and departed, and went and hanged himself.”
Only after Judas betrayed Jesus did he finally realize to his great regret that he had been used by the Devil. So he returned the 30 pieces of silver to the chief priests, but they told him that the consequences of his betrayal were his to bear. Realizing that by then it was too late to change anything, Judas ended up killing himself over his guilt.
It’s a grave sin to commit suicide before God. That’s why the Old Testament says, “You shall not eat anything that dies of itself” (Deuteronomy 14:21). When Judas realized his mistake, he should have turned around and repented, but he instead tried to mitigate his guilt in his own way.

Believe in Jesus as Your Savior