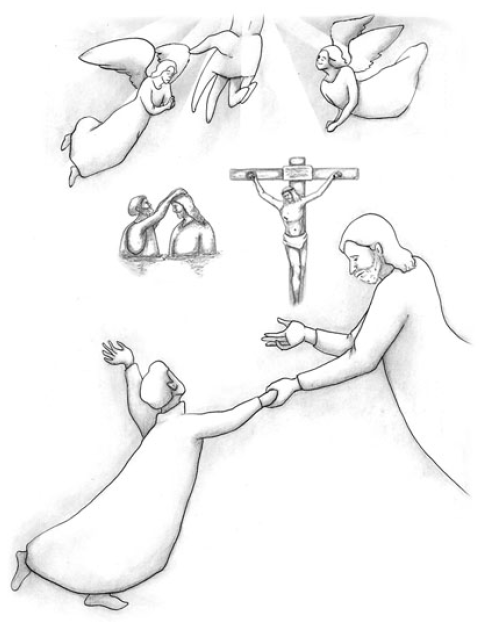 Jesus Endured His Suffering Because He So Loved Us

It’s because the Lord had been baptized by John the Baptist that He was crucified to bear the punishment of everyone’s sins while shouldering all the sins of this world. The Lord was punished for our sins because He had borne them by being baptized by John the Baptist. In other words, our Lord was crucified for us because He had taken upon all our sins. The Lord said that He was baptized by John the Baptist on this earth to accept all our sins and was crucified to death so that this world may know God’s love. The world here refers to none other than you and me. God had sent His Son to this earth to blot out all our sins. The Lord had come to this earth according to this will of the Father, and after being baptized by John the Baptist, He was crucified to death, so that we may know God’s love. God did all these things in order to save each and every one of us from all our sins.
Jesus came to this earth incarnated in the flesh of man to save you and me from sin. And having accepted all the sins of the world by being baptized by John the Baptist, He was crucified to death. You must grasp here why Jesus Christ had to endure the suffering of the Cross even though He had done nothing wrong. That’s because if Jesus Christ had not been baptized and crucified because of our sins, then we could never solve the problem of our sins by ourselves.
Among the countless people living on this earth, only those who are poor in spirit truly remember that the Lord was baptized and crucified to save sinners from sin, only these people understand His will, and they alone accept Him as their Savior. The Lord endured His suffering like this in order to make the Truth of salvation known to the world. He was baptized by John the Baptist and crucified so that we may realize that God the Father loves us that much. As the Lord was baptized by John the Baptist and endured the suffering of crucifixion when He came to this earth, He could save us once and for all. We must realize this Truth without fail and believe in it with all our hearts. Jesus endured the pain of His flesh being torn apart by 39 lashes, He bore the shame of being stripped naked, and He was even slapped in the face surrounded by ridicule. God Himself endured all these things because He loved us so much that He wanted to blot out all our sins. Everyone must realize and believe that the Lord Himself bore all the suffering on this earth to make this love of God known to all. All of you must grasp here without fail that God loved the world like this, and that He loved you and me to death.
Because God loved you and me and the entire human race, He wanted to solve the problem of sin that we could not solve by ourselves. So God Himself came to this earth incarnated in the flesh of man, bore all the sins of the human race through the baptism He received from John the Baptist, and endured indescribably cruel torture until He was at last crucified. Our Lord then poured out all the blood that was in His heart and died on the Cross, rose from the dead again, and is now personally testifying that He has saved us from all our sins. You must realize this clearly.
God loved us so much like this that He delivered us from sin and judgment and saved us from everlasting destruction and hell by blotting out all our sins. God Himself went through such hardships to save you by accomplishing the gospel of the water and the Spirit. Therefore, it would be a great mistake if you not only failed to recognize this but, even worse, showed no desire to know it nor believe in it. God loved all of us, and He still loves us. Therefore, all of us must not only realize with our heads but also believe with all our hearts that our Lord was baptized and crucified because He loved us, and that all these things were done out of His love for us. We must truly grasp the love of God through the gospel of the water and the Spirit.

Everyone Must Die Once

As it is written, “And as it is appointed for men to die once, but after this the judgment” (Hebrews 9:27), everyone has to die once after being born in this world without exception, and everyone will be resurrected for sure. Some people will be resurrected into eternal life, while others will be resurrected into judgment. Because judgment awaits everyone after death, your physical death does not mean that everything is over. Although we were all destined to be condemned and cast into hell for our sins, the Lord has made it possible for us to go to Heaven. Our Lord loved us so much that He saved us from all sins through the gospel of the water and the Spirit. Out of His love for mankind, Jesus Christ came to this earth, willingly received His baptism to bear all the sins of the world on His own body, and died on the Cross to personally pay off the wages of all these sins for us. And rising from the dead again, He has saved us perfectly. The Lord has thereby enabled all of us who believe in the gospel of the water and the Spirit not to be destroyed in the next world but instead enter Heaven and live with God happily forever. In this way, God “did not spare His own Son, but delivered Him up for us all” (Romans 8:32). That is how much the Lord loved us.
Although we often act as though we would live for a thousand years, all of us must die in fact. It’s written in Psalm 90:10, “The days of our lives are seventy years; And if by reason of strength they are eighty years.” Do you think you will live forever? If not forever, then do you think you will at least live for a long time? But some may die in ten days, others in a month, and still others in a few years. The only difference is how long one lives; once born, everyone must die eventually. And once you are dead, you will stand before the presence of God to face the judgment awaiting you. True happiness is not all that we have in our everyday lives. Once the hours allotted to us are gone, sooner or later the day will come for us to stand before God’s throne of judgment. That’s why everyone must believe in Jesus Christ who came by the gospel of the water and the Spirit.
Dragged to the court of Pilate, Jesus Christ received forty stripes minus one, and His entire body was covered in blood. He was then revealed to the people with a crown of thorns on His head and a purple robe on His body. Even though Pilate tried to release Him several times, he was outmaneuvered by the political skills of the Jewish leaders and ended up delivering Him to the Roman soldiers. But Jesus endured all His suffering quietly, like a sheep silent before its shearers. And He carried the Cross to Golgotha, a hill whose name meant the skull. He was crucified there, and although He poured out all His blood on the Cross and suffered the most painful death, His last words were, “It is finished!” (John 19:30)
Jesus had come to this earth to bear all our sins through His baptism and save us by being condemned in our place. He was born on this earth to carry out His work of salvation, but for us, it was to bring the infinitely joyful news of salvation, just as we sing, “Joy to the world, The Lord is come!” In other words, Jesus Christ came to this earth to save us from all our sins by being baptized by John the Baptist and crucified to death. His purpose on this earth was to make us God’s own children by giving up His own life for us and blotting out all our sins. He did all these things because He loved us. It was to manifest His love to us that Jesus was baptized and crucified, thereby fulfilling our salvation.
Did Jesus Christ have any sins at all? No, He was completely sinless. Yet onto His sinless body, He accepted all your sins and mine through the baptism He received from John the Baptist. Jesus Christ was crucified for our transgressions, and He was bruised for our iniquities. It’s because He had been baptized by John the Baptist that He was crucified to pay off the wages of our sins and rose from the dead again. It’s entirely because of our sins that Jesus endured such terrible sufferings. It’s because He loved us so much like this that we could be saved from all the sins of the world. It’s not because of our own merits that we were saved by Him.
Have we ever asked the Lord for our salvation? But even before we asked Him, the Lord already knew us so well that He saved us by washing away all our sins with the baptism He received in the Jordan River and the blood He shed on the Cross. Just how selfish and flawed were we before God? Although we have been born again by believing in the gospel of the water and the Spirit, both the believers and the unbelievers are completely selfish. After all, do we not blindly accept anything that serves our own interests and reject anything that does not? In contrast to such selfish people like us, God Himself came to this earth in the flesh of man to be baptized and crucified, thus saving our souls once and for all without demanding anything from us. This means that God had come to free us from sin and the punishment of death, to give us the happiness of the next world, and to also make us prosper in this present world as His own children. In this way and through such salvation, the Lord has manifested His love for you and me.

Therefore Everyone Must Believe in God’s Love