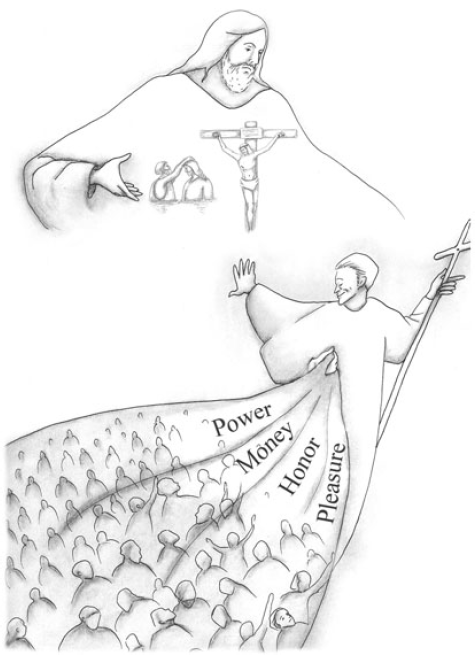 Jesus Did Not Get Crucified Because He Was Powerless

Did Jesus die by being crucified because He was powerless? No, He did not. To save us from the sin of this world, Jesus took away all our sins by receiving His baptism from John the Baptist, and to receive the full judgment for them, He died by shedding His blood on the Cross. We must surely realize and accept this.
We should also know that this punishment by being crucified is something truly horrible. When we talk about Jesus being crucified we should not say it as if it was meaningless words that just fall off our lips, but rather think about it seriously like as if a thorn was stuck deep in at the end of our finger. It will really unbearably sore and painful. Just imagine someone driving nails into your feet and wrists, cutting off and through vital arteries. The unbearable pain and blood flowing down freely and skin tearing apart would be unimaginably horrible. Medical doctors had once proved that this kind of death is the most terrible and painful that a person could suffer.
When a person is hung on a cross with crude nails are driven into through the wrists and feet, the body will first become limp, and then the skin will begin tearing, spilling much blood. When that happens, the blood inside the heart will circulate and then spill out from the body, and any remaining blood will circulate once more and then spill out. It is said that the ensuing shakes and pain cannot even be expressed into words. The pain of crucifixion cannot possibly be imaginable.
Thus, we cannot but express it into words like this. This is because we are unable to express our emotions so intimately; we can only elaborate this by saying, “They crucified Him.” Could you imagine being nailed to the Cross like this? How horrific would this be? But when expressed into words - in a single sentence, “He suffered death by being hung onto a crude execution device,” would suffice. Whatever the case, that Jesus was crucified instead of us should be engrave deep within our hearts and just how much the Lord loves us and just how much suffering He had to go through for us.
Talking about this, a certain famous movie director created a film to reproduce such gruesome pain suffered by Jesus. We see this movie drawing great popularity these days. It is also said that many people began believing in Jesus just by watching this single film, and that those who had distanced themselves from the Lord had returned. I think the gruesome pain of Jesus must have been well depicted in this movie.

Jesus Suffered the Horrific Pain of the Cross for Us

When see this movie, we see Jesus suffering great pain while hanging on the Cross. The nails that were driven into and through Jesus’ wrists and feet were large thick crude nails like those used on old wooden electric poles. And it is said that once such crude nails are driven into a human body, it goes through horrific suffering for a long period of time and does not die immediately.
When someone gets shot by a gun or gets stabbed with a knife, their limbs convulse and they die soon thereafter. But unable to die immediately, Jesus hung on the Cross for six hours; from 9am through to 3pm. (Mark 15:25-34); could you really imagine experiencing such great pain? It truly must have been gruesome to the uttermost. But we should know that Jesus suffered such pain for us. He having received His baptism from John the Baptist and then having suffered such unbearable pain by being nailed to the Cross, was all because He loved us so much and because He had taken onto Himself all our sins.
Because the Lord loved you and me, He was born into this world with a lowly appearance. Jesus was born with such an unattractive appearance to save you and me who were also lowly from all our sins. Jesus did not come to this world to save the rich, but rather He came to save you and me who were poor in spirit. For this reason Jesus has become our Savior, and He is the true Shepherd who feeds, clothes and raises us up with His great love. Jesus is the King of Love. We must deeply recognize this and believe that only Jesus Christ and only God the Father loved us like this, and that He had gladly suffered this terrible pain for us.
The Lord said, “I sent you to reap that for which you have not labored; others have labored, and you have entered into their labors” (John 4:38). We therefore praise Jesus by saying, “My Shepherd is the King of love, and He is my Shield in tribulation.” Because Jesus suffered such great pain and hardship to save us, we are now able to receive our salvation by faith, and also reap the spiritual harvest by faith. Furthermore, we have come to receive much grace and blessing. Could you serve another god by setting aside a Lord like this? No, we cannot. By coming down to this earth, Jesus showed us His love and also suffered much hardship in order to save us. If we truly believe this, how can we have any other god? There can never be another god. No such one can ever exist.
Many things in this world often tempt us; and there will be times when we cannot escape them due to our own weaknesses. But one thing that never changes and that is, there is no one else more loving than God. Therefore we praise Him by singing, “♩I’d rather have Jesus than anything. ♬This world affords today♪” This is true. There is no one else besides our Lord. There can never be anyone else. Right now, we are neither professing some religion nor following some fanatical religious leader, but instead believe in the genuine God who saved us completely. By receiving our salvation from this loving God, what we only desire is to know only this God, go on living through Him, realizing only He is our King, and lead our lives believing this and serving Him.

The Crucifixion of Jesus Is the Perfection of Love

The Gospel of the Water and the Spirit Is True, but the Gospel That Believes Only in the Blood of the Cross Is False