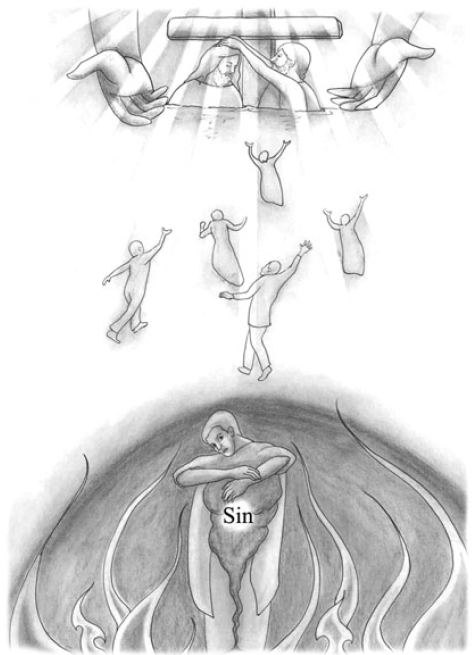 (John 20:19-31)
“Then the same day at evening, being the first day of the week, when the doors were shut where the disciples were assembled, for fear of the Jews, Jesus came and stood in the midst and said to them, ‘Peace be with you.’ When He had said this, He showed them His hands and His side. Then the disciples were glad when they saw the Lord. So Jesus said to them again, ‘Peace to you! As the Father has sent Me, I also send you.’ And when He had said this, He breathed on them and said to them, ‘Receive the Holy Spirit. If you forgive the sins of any, they are forgiven them; if you retain the sins of any, they are retained.’ Now Thomas, called the Twin, one of the twelve, was not with them when Jesus came. The other disciples therefore said to him, ‘We have seen the Lord.’ So he said to them, ‘Unless I see in His hands the print of the nails, and put my finger into the print of the nails, and put my hand into His side, I will not believe.’ And after eight days His disciples were again inside, and Thomas with them. Jesus came, the doors being shut, and stood in the midst, and said, ‘Peace to you!’ Then He said to Thomas, ‘Reach your finger here, and look at My hands; and reach your hand here, and put it into My side. Do not be unbelieving, but believing.’ And Thomas answered and said to Him, “My Lord and my God!” Jesus said to him, ‘Thomas, because you have seen Me, you have believed. Blessed are those who have not seen and yet have believed.’ And truly Jesus did many other signs in the presence of His disciples, which are not written in this book; but these are written that you may believe that Jesus is the Christ, the Son of God, and that believing you may have life in His name.”
Over a period of one year, Easter will only last for one week. During the so-called Lent we think about the passion of Jesus for forty days, and we observe the week where Jesus died on the Cross and was resurrected in three days. Although we don’t observe Easter by boiling eggs etc, like others do, we instead strengthen our faith during this time by meditating on the meaning of Jesus’ passion and resurrection. At Easter many people boil and them by writing on the eggshell phrases such as ‘Easter Celebration’ or ‘Jesus Has Risen.’ Those who eat much will eat four and those who overfeed will even eat thirty. They think that by eating in the way they can pay a tribute to the resurrection of Jesus.
Even though we don’t observe this feast in any special way, because if we don’t eat eggs and if we did some of you might regret it, we would nevertheless like some boiled eggs this Easter. If you want to draw pictures or write words on the eggshells, please do so, and please make sure that there will be at least one for each person. However I would like you to eat these eggs thinking about the true meaning of Easter.

The Meaning of Easter

Besides Peace, What Else Did Jesus Give to Us?