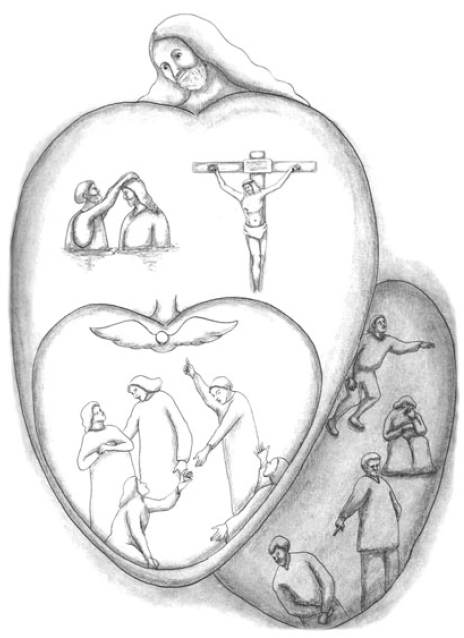 (John 21:1-20)
“After these things Jesus showed Himself again to the disciples at the Sea of Tiberias, and in this way He showed Himself: Simon Peter, Thomas called the Twin, Nathanael of Cana in Galilee, the sons of Zebedee, and two others of His disciples were together. Simon Peter said to them, ‘I am going fishing.’ They said to him, ‘We are going with you also.’ They went out and immediately got into the boat, and that night they caught nothing. But when the morning had now come, Jesus stood on the shore; yet the disciples did not know that it was Jesus. Then Jesus said to them, ‘Children, have you any food?’ They answered Him, ‘No.’ and He said to them, ‘Cast the net on the right side of the boat, and you will find some.’ So they cast, and now they were not able to draw it in because of the multitude of fish. Therefore that disciple whom Jesus loved said to Peter, ‘It is the Lord!’ Now when Simon Peter heard that it was the Lord, he put on his outer garment (for he had removed it), and plunged into the sea. But the other disciples came in the little boat (for they were not far from land, but about two hundred cubits), dragging the net with fish. Then, as soon as they had come to land, they saw a fire of coals there, and fish laid on it, and bread. Jesus said to them, ‘Bring some of the fish which you have just caught.’ Simon Peter went up and dragged the net to land, full of large fish, one hundred and fifty-three; and although there were so many, the net was not broken. Jesus said to them, ‘Come and eat breakfast.’ Yet none of the disciples dared ask Him, ‘Who are you?’—knowing that it was the Lord. Jesus then came and took the bread and gave it to them, and likewise the fish. This is now the third time Jesus showed Himself to His disciples after He was raised from the dead. So when they had eaten breakfast, Jesus said to Simon Peter, ‘Simon, son of Jonah, do you love Me more than these?’ He said to Him, ‘Yes, Lord; You know that I love You.’ He said to him, ‘Feed My lambs.’ He said to him again a second time, ‘Simon, son of Jonah, do you love Me?’ He said to Him, ‘Yes, Lord; You know that I love You.’ He said to him, ‘Tend My sheep.’ He said to him the third time, ‘Simon, son of Jonah, do you love Me?’ Peter was grieved because He said to him the third time, ‘Do you love Me?’ And he said to Him, ‘Lord, You know all things; You know that I love You.’ Jesus said to him, ‘Feed My sheep. Most assuredly, I say to you, when you were younger, you girded yourself and walked where you wished; but when you are old, you will stretch out your hands, and another will gird you and carry you where you do not wish.’ This He spoke, signifying by what death he would glorify God. And when He had spoken this, He said to him, ‘Follow Me.’ Then Peter, turning around, saw the disciple whom Jesus loved following, who also had leaned on His breast at the supper, and said, ‘Lord, who is the one who betrays You?’”

God So Loved Us

God created the universe and everything in it, and then only did He created human beings according to His own image. He had created human beings only after having firstly created a safe and comfortable environment for them to live in. He had granted the entire creation of the universe to human beings and said, “Be fruitful and multiply; fill the earth and subdue it; have dominion over the fish of the sea, over the birds of the air, and over every living thing that moves on the earth” (Genesis 1:28).
Why do you think the omniscient and omnipotent God created all things of this universe first before He created human beings? He did this because He knew people would interfere with His work. And why do you think He granted all things to people? It was because He loves us humankind that much. If this be so, why do you think God loves us so much?
Let us take a look at the Book of Genesis chapter 1 verse 27. “So God created man in His own image; in the image of God He created him; male and female He created them.” If we read this passage carefully, we will see that God created human beings in accordance with His own image. Just because He had made us in His own image, we must not think that had created our outer appearance to look like Him. The Bible does say that, “God is Spirit” (John 4:24), God having created us in His own image really means that He created us as spiritual beings. A spiritual being means that it can enjoy glory forever along with God for such a being is divine like God and can live eternally. And this is clearly the purpose why God created human beings. In other words, God created human beings as beings who can live together with God forever. Also, therein lies the important and profound secret in the fact that God had created human beings in His own image.
People are the happiest when they give birth to children who look exactly like themselves. You must have seen parents all so happy when they are told, “The baby looks exactly like his father.” If one were to look at the baby and say, “That baby looks just like the man next door,” would parents like such a remark? They will most certainly not like a remark like that. If this did happen they will never let that person to enter into their home again due to their anger. Like this, to parents a child is their offspring and very precious and valuable because its life is linked with theirs. So we see a parent’s love towards their own children is endless, and even if they were to give everything they own to them, they will not feel any regret. Does God love people for this very reason? No, not at all. We need to know that it is because God made us in His image in all aspects. God wants all human beings who were made in His image, to live together with Him in Heaven for all eternity; knowing this can you imagine just how great His love is?
There are times when people are unable to give things to their children, but for our God, He is able to give anything He wants to His people. Do you truly know why God made human beings in His image? He did so in order to give them everything that is in Heaven. It was to allow people to live eternally like God and to enjoy everything and all the glory of Heaven together with Him forever. Like this, human beings had been created in God’s image to receive all God’s blessings; but how foolish would that be if they only sought out for fleshly things by just say living for some tens of years in this world?
We should always be thinking about of the origin and the goal of our lives. Sadly, there are many people who go on living without understanding why they have been created, where they come from, and where they are going. People like this must meet God through the gospel of the water and the Spirit by faith without fail. And they must clearly know why they have been created, why God created them, and also where they will be going in the future. Once answers to these questions are found, they will be able to feel the unfathomable warm love of God.

Our Life of Faith Is Actual and Real