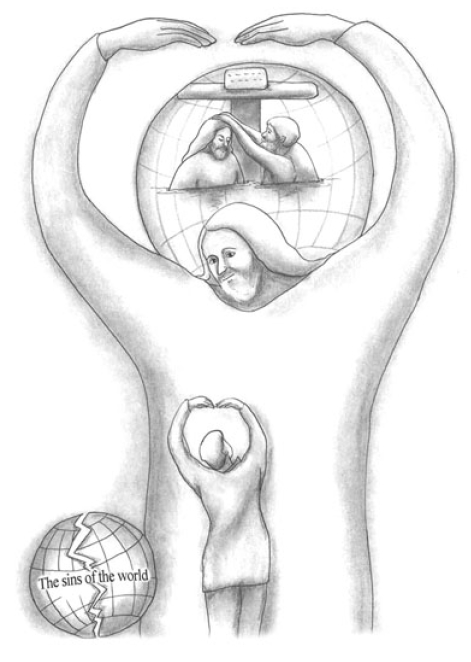 What Is the Gospel of the Water and the Spirit That the Bible Speaks of?

The first evidence comes from Matthew 3:15, which tells us that all the sins of this world were passed onto Jesus once for all when John the Baptist baptized Jesus Christ: “But Jesus answered and said to him, ‘Permit it to be so now, for thus it is fitting for us to fulfill all righteousness.’ Then he allowed Him.” The baptism of Jesus by John the Baptist was to take upon Himself all at once the sins of the people of this world.
Here, the words “for thus” is “οϋτως γάρ” (hoo’-tos gar) in Greek. These words mean “just in this way,” “most fitting,” or “there is no other way besides this.” To fulfill “all righteousness” is “πάσαν δικαιοσύνην” (pasan dikaiosunen) in Greek, that means “the fairest state that has no defect at all.”
Therefore, this passage shows us clearly that Jesus irreversibly took the sins of mankind onto Himself in the most proper way through His baptism which He received from John the Baptist. He did this because only then would “all the righteousness” of God be fulfilled. “All the righteousness” of God is God’s rightfulness in taking upon the sins of this world though the baptism Jesus received. This is God’s righteousness. By being baptized and shedding His blood on the Cross, Jesus completely washed away the sins of humankind and saved it from all condemnation. But whoever refuses to believe in this Truth will be condemned for their sins because it is written, “He who believes in Him is not condemned; but he who does not believe is condemned already, because he has not believed in the name of the only begotten Son of God” (John 3:18). This is God’s just salvation and condemnation. The righteousness of God was fulfilled with His just salvation.
When Jesus came to this earth, He was baptized by John the Baptist, and whosoever believes in this has no sin in his heart. As far as Jesus’ method of blotting out the sins of this world is concerned, were it not for this method of being baptized by John the Baptist and crucified to death, God’s just salvation could not have been fulfilled. Through His baptism and blood, Jesus has blotted out all our sins and including the sins of this world all at once with the righteousness of God, justly and fairly. It is through the baptism of Jesus which He received from John the Baptist that He took upon all the sins of mankind, was crucified, and thereby saved us perfectly. In this way, the Lord has fulfilled all the righteousness of God once for all. Like this, God’s love was manifested through Jesus Christ. It was to complete our salvation that Jesus was baptized by John the Baptist and was crucified.
The purpose of the baptism which Jesus received in the Jordan River from John the Baptist was to shoulder all the sins of this world once for all. Where then have all our sins gone to? Today’s Christians believe that their sins still remain intact in their hearts. When Jesus was baptized by John the Baptist to take upon all the sins of sinners, and He indeed bore all these sins, how can there still be any sin left in this world? If you believe like this, how could your sins ever be blotted out? Those who wholly believe in the baptism of Jesus would realize that their sins were passed onto the body of Jesus. However, those who do not believe in Jesus’ baptism with their hearts could never say, “There is no sin in my heart.”
We must believe that Jesus took upon all our personal sins as well when He was baptized. If you believe in this Truth, how could your sins still be with you? If you really know the meaning of the baptism of Jesus and His bloodshed on the Cross, and if you really believe in this, then there can be no sin left in your hearts whatsoever. Since this world’s sins were justly passed onto Jesus through His baptism, and if we believe with our hearts that Jesus fulfilled the righteous work of taking upon all our sins, then we can be perfectly saved from all our sins. Everyone should believe in this Truth and be saved from all our personal sins as well.

The Implication of the Baptism of Jesus

The Very Gospel Testified by the Twelve Disciples

It is written in Acts 1:21-22, “Therefore, of these men who have accompanied us all the time that the Lord Jesus went in and out among us, beginning from the baptism of John to that day when He was taken up from us, one of these must become a witness with us of His resurrection.” This passage outlines the qualifications of apostleship that Peter proposed when the disciples were to select a new apostle to replace Judas. In short, an apostle could therefore only be chosen from the disciples who would testify that Jesus Christ has become the Savior of sinners by being baptized. What we need to pay close attention to here is the phrase, “beginning from the baptism of John.” In other words, the new apostle had to be someone who had walked with Jesus from when He was baptized, a righteous man who fully knew why Jesus received water baptism from John the Baptist, and exactly why Jesus died on the Cross—only such a man was qualified to become an apostle. Apostles were raised from the disciples who knew exactly how Jesus brought the remission of sin, by taking upon the iniquities of sinners through His baptism and blotting them out with the blood He shed on the Cross.
The Apostles, who were Jesus’ disciples, preached the message about the baptism of Jesus and His Cross. All the Apostles preached the gospel of the water and the Spirit that began from the baptism of John. In other words, the purpose for which Jesus was baptized by John the Baptist was for Him to become the Savior of sinners. The Apostles of Jesus all knew this and testified to it clearly. They believed that it was the most righteous work to preach the baptism of Jesus, His death and His resurrection and thereby deliver this world’s sinners from their iniquities.