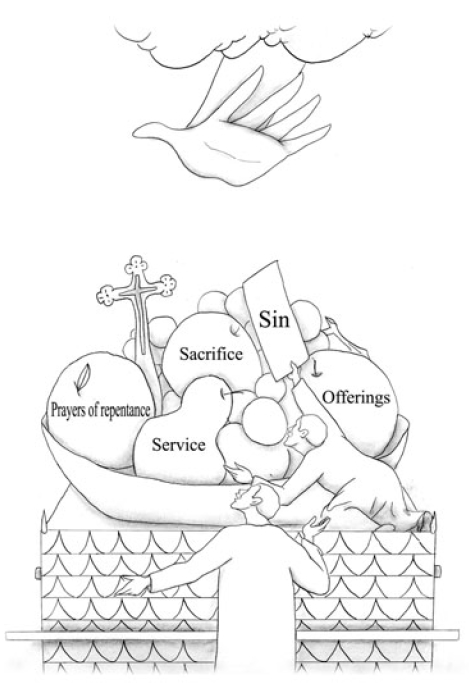 (Genesis 4:3-7)
“And in the process of time it came to pass that Cain brought an offering of the fruit of the ground to the LORD. Abel also brought of the firstborn of his flock and of their fat. And the LORD respected Abel and his offering, but He did not respect Cain and his offering. And Cain was very angry, and his countenance fell. So the LORD said to Cain, ‘Why are you angry? And why has your countenance fallen? If you do well, will you not be accepted? And if you do not do well, sin lies at the door. And its desire is for you, but you should rule over it.’”

As the end of the world draws near, blessed are those who follow the Lord and live in Him. Today’s Scripture passage tells us about what sort of faith we should have when we go before God and also serve Him.
It is written, “And in the process of time it came to pass that Cain brought an offering of the fruit of the ground to the LORD. Abel also brought of the firstborn of his flock and of their fat” (Genesis 4:3-4). Here, Cain and Abel both offered there own separate sacrifice to the Lord, but the problem was that their sacrifices were very different from each other. It is said that Cain offered the fruit of the ground as the sacrifice to the Lord while Abel offered the firstborn of his flock and their fat. One had offered the fruit of the ground while the other had offered a lamb.
What do you think the fruit of the ground is? Cain offered to God things we usually eat, such as wheat, rice, beans, potatoes, melons, strawberries and all that sort of things. But Abel sacrificed the faultless firstborn of his flock and offered its meat and fat. The truth is there was a huge difference between these two sacrifices. This does not mean that there is a difference regarding the amount of sacrifices offered by believers today, but rather, this event tells us that amongst believers, there are those who believe in God properly while there are those who serve God with wrong faith. People who knew and believed in God properly offered the firstborn of their flock as a sacrifice to God, but those who have a wrong understanding of God and therefore a wrong faith in Him offered God the fruit of the ground as their sacrifice to God. In other words, this Scripture passage tells us that a small number of people believed in God spiritually while the larger amount of people believed in God in terms of the flesh.
How can we determine if we believe in God properly or not? If we look at the Book of Genesis chapter 4:4 we will read, “Abel also brought of the firstborn of his flock and of their fat. And the LORD respected Abel and his offering.” God had accepted Abel’s sacrifice, but He did not accept Cain’s and his sacrifice. Like Abel and Cain, among the Christians in this world, there are those who bring forth a sacrifice gathered with own strength from the ground while there are those who bring a lamb to God. It means that there are two types of faith in today’s Christianity. Therefore it is clear that people who bring forth sacrifices like that of Abel are accepted by God, and people who bring forth sacrifices like that of Cain are actually cursed. Thus a question arises. Why did God accept Abel’s sacrifice and why did He not accept Cain’s sacrifice?

Unlawful Sacrificial Offering and Proper One

We need to know that God does not accept the faith and the worship of those who go before Him to worship with their merits saying, “Dear God, I did this and that for You. Lord, for You, I endeavored this much, accumulated this much achievements, offered all this sincerity and sacrificed much. And Lord I will continue doing these things until I die.” God does not accept the worship and the faith of those who offer their human sincerity, because if He were to receive worship like this, His heart would become heavy and will be indebted to human beings. Instead of being a God who has bestowed grace, He would be a God who has received favor from human beings.
God does not want to be a debtor. If this happened then God would say, “Hey, if you endeavor like that, don’t I have to do something for you?” And He will feel burdened. Then God will really feel ill at ease with their faith. God wants us to praise Him by having faith in and being truly thankful for the fact that God has loved us so much. In order to blot out all the sins of humankind, He sent Jesus to become the Savior of humankind. God accepts the worship of faith by those who go before Him with thankfulness and joy, offer worship to Him and serve Him.
God lacks nothing. He exists on His own, without any need or help from us whatsoever. God has no desire to receive any benefit from people, whoever they may be, not even just a little bit. God does not want to be in debt to anyone. God is Almighty. Let us assume that one of God’s creations comes before God and says, “I have labored so hard for You, so please accept this gift. I will do this for You everyday.” Worship like this is only a burden and anguish to God. And by doing this would only be showing disregard for Him. It would be the same as a beggar going through garbage dumps and bringing useless things by the truckload everyday to a king who has no lacking whatsoever. Although they might seem good in his eyes, but to the king, these things are only foul smelling rubbish. The righteousness of humankind is like that. Though they might seem clean to human eyes, they are in fact “like filthy rags” (Isaiah 64:6).
What is the sort of faith does God finds most joy in? God finds joy in those who come before God by perfectly believing in God, that is, by believing God having saved them perfectly from sin and offer worship and praise to Him. Worship like this is the one that God finds joy in. What sort of worship does God accept? God accepts the worship of faith from people who believe that God Himself came to this earth in human form, took upon all our sins by receiving the baptism at the Jordan River, received the judgment for us, was resurrected in order to save us, and now sits on the right hand side of God the Father.

God Does Not Accept the Sacrificial Offering of a Sinner