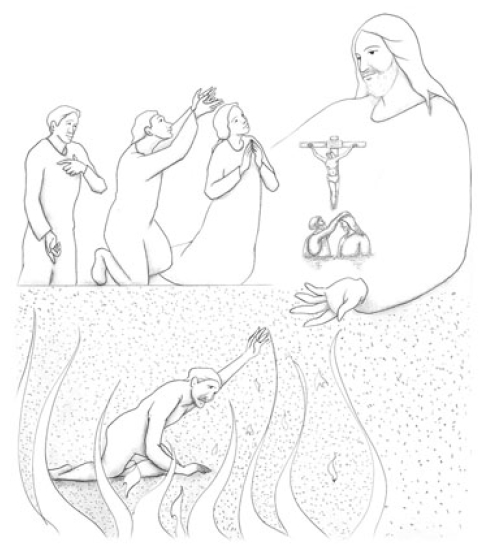 (Genesis 4:16-24)
“Then Cain went out from the presence of the LORD and dwelt in the land of Nod on the east of Eden. And Cain knew his wife, and she conceived and bore Enoch. And he built a city, and called the name of the city after the name of his son—Enoch. To Enoch was born Irad; and Irad begot Mehujael, and Mehujael begot Methushael, and Methushael begot Lamech. Then Lamech took for himself two wives: the name of one was Adah, and the name of the second was Zillah. And Adah bore Jabal. He was the father of those who dwell in tents and have livestock. His brother’s name was Jubal. He was the father of all those who play the harp and flute. And as for Zillah, she also bore Tubal-Cain, an instructor of every craftsman in bronze and iron. And the sister of Tubal-Cain was Naamah. Then Lamech said to his wives:
‘Adah and Zillah, hear my voice;
Wives of Lamech, listen to my speech!
For I have killed a man for wounding me,
Even a young man for hurting me.
If Cain shall be avenged sevenfold,
Then Lamech seventy-sevenfold.’”

People Who Departed from God

Today’s Scripture passage tells us what the consequences are for the people who have departed from God. How have people who have departed from God lived in this world? Firstly it is written that Cain went out from the presence of the Lord God and dwelt in the land of Nod on the east of Eden, and he had a son there and built a city named Enoch. Cain faced the end of his life after living in the city he built. The consequence for Cain leaving God was that he became a wanderer. It says that God set a mark on Cain before he His left His presence. Genesis chapter 4:15 states, God did this “lest anyone finding him should kill him.” God set a mark of salvation on Cain so no one might kill him, but Cain left the Lord God regardless. The Scriptures tells us that the most treacherous sin is to leave God, who is doing everything to save him even to the very last moment.
Cain left God and dwelt in the land of Nod. The name ‘Nod’ means to wander and this implies that Cain died after living a life of a wanderer in this vain world. God’s Church is a place where people who have received a mark from Him dwell. It says that Cain did not dwell in God’s Church and he was eventually cursed after living a life of a wanderer. It also means that God’s people who have left His Church live without any meaning and roam about aimlessly here and there everywhere. They are not unable to fix their hearts in any one place and continue to roam from place to place. Through Genesis chapter 4, God tells us how a person who has left God lives and shows us the course and consequence of such a life. Where did Cain wander about after leaving God? It is none other than the world outside of Christ. To put it another way, it means that Cain left God’s Church and lived a life that belongs to this world.
Having departed from God, Cain had a child of his own flesh and named this child Enoch. Cain also built a city with walls around it and named that place, Enoch. In most modern societies these days, we can only see cities composed of skyscrapers or apartment complexes or residential areas of family homes and they no longer build a city walls. Walls may seem foreign to you. But they built walls with stones in ancient times. It was their sole objective to build these high walls with stones to defend against themselves against enemy invasion. High walls normally surround an impregnable fort, and are only able to enter the city only through castle gates. Because Cain built a castle city shows Cain’s state of severance from God, and also he became isolated from God and continuously lived only for the desires of his own flesh until he died. And that was the most treacherous act before the presence of God.
Therefore our hearts, our thoughts and our behaviors must always be open before God. We must listen to what God is saying to us and have the will to accept it into our hearts. Are you prepared to receive God’s Word into your heart? What I am really asking is whether your heart is ready to say, “Yes, I will” whenever God tells us something. We must always have our hearts open towards God and accept the Word He gives into our hearts, and always live with faith by holding fast onto His Word.
We must be mindful of this even when we are serving the gospel of the water and the Spirit. When ministers have meetings together, we must know how to go along with faith and unity when an appropriate conclusion has been reached. But God’s righteousness cannot be fulfilled if a person unable to unite with the decision of the Church by not overcoming his own fleshly thinking and just persisting with his stubbornness. There is a regional dialect in Kangwon Province in our country Korea, and they often say “Sure, of course” to give consent. It’s a very good way of consent to say “Sure, of course” with faith to what the leader is saying.
It is difficult to live spiritually when one has built a fleshly castle before God. Usually people who have left God build a castle of their own flesh. They say, “I will live like this.” Ultimately, such people end up building their respective castles of their own flesh. Did Adam and Eve live with their castle built around them? No, they did not build a castle wall. Even though they had sinned, they received salvation from all their sins through the faith of believing in God’s Word and lived in unity with God. They lived with God’s special protection within God’s blessings. In the Scriptures, Cain was the first person to build a city wall. No one can live apart from God, but Cain did so from the depth of his stubborn heart. And he also built the castle wall of his flesh to protect himself on his own. Do you think it is difficult to build a castle wall of his flesh to live therein, or don’t you? It is very difficult. Cain left God and built his own castle and lived therein with his children. How did his children turn out to be? They all became people who stood against God.

Why Do People Live Separate from God?

Genesis chapter 4 speaks about how Cain’s descendants lived and established civilization afterwards. But before we move on from this issue, I would like to ponder more on the account that Cain left God. And we must consider whether or not we have built our own castle before the presence of God. We are building our own castles before the presence of God when we think, “I will live in this way. I will follow the Lord, but I will do so at a reasonable distance. What I really mean is I will follow the Lord with my own style, and not in a way the Lord requires from me.” If you do that you are certainly entering onto a road of death. Cain built his own castle because he left God, but he would not have needed to build his own castle if he did not leave God; he would not have the need to devise his life by his own strength because God would have helped him.
It says that Cain departed from God and built his own castle and city. Likewise, even the saints and God’s workers would have to build their own castles of the flesh if they try to live for themselves apart from God’s Church. They have to work diligently to get the materials needed to live for themselves and have good relationships with worldly people to get along in this world, and give lots of effort to keep good relationships with them. Before being born again by believing in the gospel of the water and the Spirit, did you not also live in this world while building a castle of flesh around you? Believing in your own strength and putting emphasis on human relationships is really building your own castle of flesh. But what kind of results did it reap? You have diligently built a castle for yourself, but did not this castle eventually collapse around you. A trusted friend or a truly dependable colleague betrays you, and your lover leaves you when you need their help so desperately. The castle built with one’s own flesh is bound to collapse.
We should understand that anyone who departs from God consequentially builds his own castle. Therefore we should not follow after our own fleshly thinking and we should live with consideration of what aspect of us God is most happy about and also what God wants us to do. That means that we should live with consideration of what God’s will is, and how we should obey God’s will. We must not live with our own standards before the presence of God. God knows all of our thoughts, hearts, and even our future and leads us onto the righteous path. Therefore if we really desire to follow after God, we must deny our fleshly thinking and live with faith of believing in God’s Word, rather than insisting on our fleshly thinking.
We who have been born again by believing in the gospel of the water and the Spirit must live with spiritual faith and not depart from God. We must have faith of believing in God’s Word and not depart from God. If we don’t do this we will for sure depart from God. And we will surely be cursed if we leave God by not believing in the God given gospel of the water and the Spirit. The curse will be handed down to our descendants from generation to generation as an inheritance due to our departure from God if we were to leave God who is the source of all blessing.

The Origin of Human Civilization

What Do Humans Seek to Solve the Problem of Food, Clothing and Shelter?