[Chapter 12-1] Throw Away Your Thoughts: Get Out of Your Country, From Your Family, and From Your Father’s House (Genesis 12:1-5) 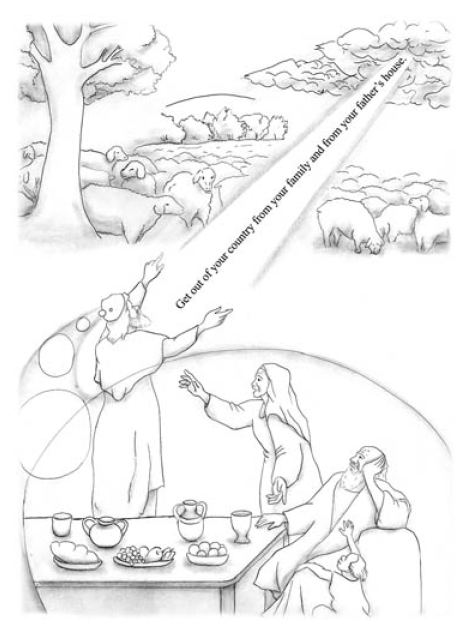 We Must Throw Away Our Fleshly Thoughts

The most important thing in leading our spiritual life is to throw away our own thoughts. It is because the first step in our spiritual life begins from getting out of our country, from our family and from our fathers’ house. Of course, this is very difficult. But nevertheless, we must leave for sure. It is very difficult to throw away our thoughts, but we must for sure throw them away. We must throw away all our old habits and thoughts. A person who has been born again must have new thoughts and faith and follow by believing in the new teachings from the Word of God. Everything becomes new after receiving salvation. We meet new people, attend a new Church, face a new environment, and therefore all things become new to us. Those who have been born again must have new thoughts all the time and follow the Lord with new faith. Following God by faith means following the Word of God, and this also means following the words of the leader that is guiding them with the Word and following the directions of the Church.

You Must Know Where You Belong

There are many people who are forced to retire. They are forced to retire although they are still young, and some are even fired from work instead of being retired. We often see people being fired for rebelling against the organization or company they belong to. For example, there are instances of people getting fired for being at the forefront of change by exposing the corruption they know and have experienced. We see instances where they are excluded from being rehired after their employment contract has expired although they have won the legal battle. And there are many people who become unemployed because their company goes out of business because the workers of that company form a union and cause labor disputes even to the point of destroying the company because they do not have “ownership” of that company and just think, “This company is a just company that belongs to its owner, therefore I have to think about myself first.” The labor union movement in our country is especially well known for its violence. There are many foreign companies that have given up doing business in Korea and have left; they all say that they cannot run their companies normally in Korea because of its violent labor unions. Of course, its employees have the right to seek change of any unjust treatment. But the important thing is that companies cannot but go out of business because its employees view the company they work for as an enemy or an object of dispute if they do not have a sense of belongingness.
We can look at an example of this. Every social organization can be seen as a boat and its members of this organization can be seen as the sailors of the boat. That is, each of them has a different position and responsibility, but they are all a part of its common destination. But what would happen if each crew member sought his own profit and if it was not realized, they would threaten to make a hole in the boat, and indeed made a hole in that boat? Water would suddenly gush into that boat and they would all die. How foolish is this? But sadly, such things really happen a lot.
There is a reason why I am telling you of this as an illustration. It is because there is something I want to say to the brothers who are going out to ministry sites after finishing their training at the mission school, and the brothers and sisters who are being trained now. Not everything God’s Church is doing can satisfy all of you. And so, dissatisfaction can become an issue in the things the Church is doing at times and a desire to leave the Church can arise in your heart when such dissatisfaction piles up. But we must know where we really belong and do not fall off from where we belong. We must have a heart that cares for the place we belong to instead of just trying to uphold our pride. I want you to think like this. Whether you are in a company or in a church, a person who does not have a sense of belongingness is really nothing. No matter what people say, this Church that you and I belong to is the Church of God, the Church where the Word of God is present, and the Church that preaches the gospel. No matter which Church in the entire country you are sent to and the Church you work for is your Church, this is the Church you must care for, the Church you must be responsible for; and you must keep in mind that the Church you belong to is your body.
We must not try to find weaknesses, corruptions, iniquities from one another whilst living together in God. Of course, people who have been born again do not have such great corruptions. But if one thinks that other people are full of iniquities while he is not like them and just tries to tear down all the time, then such a person will eventually be left alone and will be rejected when he encounters any difficulties. You must know that you will be rejected if you reject anyone else. I am saying this to you because you can grow properly in the Word when you stay in the Church together and have a united faith and have one heart and one sense of belongingness that you are one family.
We find positives and negatives from one another while leading this spiritual life together in the Church, the body of God. But if we cannot tolerate such things and insist that the other person is wrong and that only we are right, then clearly we are the problem, not the other person. And so we must give up our own thoughts, criteria, and habits and follow the Word of God while leading this spiritual life in God’s Church, and we must know that we are one body in the Word of God and remember this is “my Church.” Then only will we come to see the other saints’ positives and admirable things instead of their iniquities. And so we will soon be able to see such admirable faith and come to learn from it and also be influenced positively by it without even knowing it and also take in these influences without even knowing it. Therefore, one grows properly and comes to serve the Lord faithfully in the position God has placed them. Thus, we must know well where we belong.

God told Abraham,
“Get out of your country,
From your family
And from your father’s house.” God was telling Abraham to leave all his fleshly things behind. God was telling him to leave everything and everyone that he used to live with, such as his fleshly parents and family members who were not born again yet, and his homeland. The new settlement that Abraham would dwell in was the land of Canaan. Abraham knew and believed in this and followed the Word of Jehovah God. And his nephew Lot also decided to follow him. At that time, Abraham was seventy-five years old.
How long did Abraham live for? It is written in the Book of Genesis chapter 25 verses 7-8, “This is the sum of the years of Abraham’s life which he lived: one hundred and seventy-five years. Then Abraham breathed his last and died in a good old age, an old man and full of years, and was gathered to his people.” When Abraham died, he was one hundred and seventy-five years old. Abraham lived for 100 more years after leaving his homeland. In Abraham’s entire lifetime of one hundred and seventy-five years, seventy-five was like a young adult. Even during young adulthood, it is very difficult to leave his father’s house in his homeland. Leaving his fleshly parents behind is not easy for anyone. But Abraham left for that road because he believed and followed only after God.
We all have received the remission of sins. And everyone who has received the remission of sins leaves his or her fleshly parents. I have also left my home and family like this; and you must also live this spiritual life focused on the fact that Abraham departed from his homeland. We must join our hearts with the fact that Abraham had followed the Word and also follow after the Word in this same manner. Following the Word is what faith and belief is all about. On the other hand, it is a fake faith and unbelief if one does not follow the Word. I want all of you to follow God and live by faith. You must remember that you must follow the Word of God in order to really lead this spiritual life faithfully.
And you must remember that you must leave your father’s house. You must leave your thoughts, leave your fleshly things, and leave all the things of your past behind. I want you to know that you must believe in God, follow the Word, and be with the Church, that is the true belief and faith. And I want you to believe.
Terms and Conditions Privacy Policy Cookie Declaration Contact Us