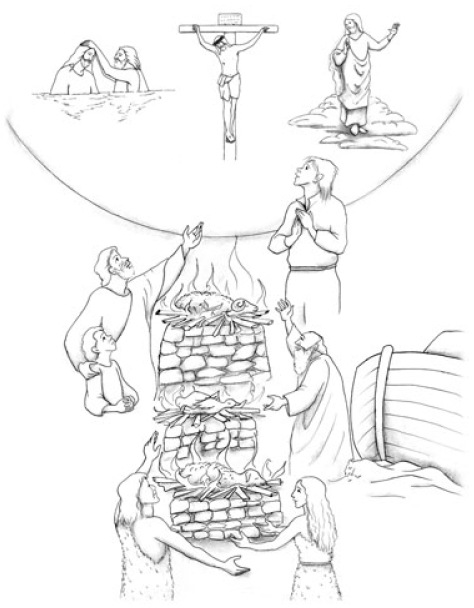 (Genesis 12:1-9)
“Now the LORD had said to Abram:
‘Get out of your country,
From your family
And from your father’s house,
To a land that I will show you.
I will make you a great nation;
I will bless you And make your name great;
And you shall be a blessing.
I will bless those who bless you,
And I will curse him who curses you;
And in you all the families of the earth shall be blessed.’
So Abram departed as the LORD had spoken to him, and Lot went with him. And Abram was seventy-five years old when he departed from Haran. Then Abram took Sarai his wife and Lot his brother’s son, and all their possessions that they had gathered, and the people whom they had acquired in Haran, and they departed to go to the land of Canaan. So they came to the land of Canaan. Abram passed through the land to the place of Shechem, as far as the terebinth tree of Moreh. And the Canaanites were then in the land. Then the LORD appeared to Abram and said, ‘To your descendants I will give this land.’ And there he built an altar to the LORD, who had appeared to him. And he moved from there to the mountain east of Bethel, and he pitched his tent with Bethel on the west and Ai on the east; there he built an altar to the LORD and called on the name of the LORD. So Abram journeyed, going on still toward the South.”
The Old Testament progresses from the period of Adam, to the period of Noah, to the period of Shem, and the period of Abraham comes after the period of Shem. Chapter twelve of the Book of Genesis describes the period of Abraham. God had thus appointed the leaders for His people and showed His will through its leaders. And when a leader was about to die, God appointed another leader for them and led them by faith as his predecessor had done.
After Terah, Abraham’s father, had died, God said to Abraham,
“Get out of your country,
From your family
And from your father’s house” (Genesis 12:1), and Abraham followed the Word of God and went towards the land of Canaan. Abraham was seventy-five years old when he left his family and his country.

Abraham Built an Altar of Burnt Offering to Jehovah God

It is written, “Then Abram took Sarai his wife and Lot his brother’s son, and all their possessions that they had gathered, and the people whom they had acquired in Haran, and they departed to go to the land of Canaan. So they came to the land of Canaan.” The Scriptures record like that. And it is also written, “Abram passed through the land to the place of Shechem, as far as the terebinth tree of Moreh. And the Canaanites were then in the land. Then the LORD appeared to Abram and said, ‘To your descendants I will give this land.’”
God appeared to Abraham and his family when they entered the land of Canaan, and as a result Abraham built an altar of burnt offering there for Jehovah God, who appeared to him and where he offered up worship service to Him. Why did he build an altar there? And what kind of altar was this? This was the same type of altar of burnt offering that Adam and Eve, Abraham’s ancestors, had built and offered burned offering up to God. And this altar of burnt offering was also the same type of altar Abel used when he slaughtered sheep and goats and offered these up to God; also it was the same type of altar Noah built after coming out of the ark after the Great Deluge. Abraham built this altar as the sign of inheriting faith, to usher in the period of Abraham.
And it tells us that Abraham built the altar to Jehovah God. His ancestors also built this type of altar while they were still alive. What do you think is the reason for this? It was used to give thanks and offer up worship to God, who saved them who could not but die and receive judgment like this. They were offering up this worship to God, returning glory to God, commemorating the name of God, and remembering this God who had been their Savior. It appeared to be a sacrifice, but today it is like the worship service we offer up to God.
Abraham built an altar of burnt offering to God like this whenever God appeared to him. We also need a sacrificial offering in order to offer up the sacrifice of burnt offering to God. Abraham, by doing this, was making the confession of faith to Jehovah God for being God of his ancestors and for himself, while passing his sins over onto the sacrificial offering, then afterwards slaughtering the sacrificial animal and cutting it into pieces and burning it on the altar.

All the Ancestors of Faith Built This Altar of Burnt Offering

Do we or do we not offer up the sacrifice of the altar of the burnt offering whenever we have a worship service? We do. Jesus Christ came to this world, took all our sins upon Himself by His baptism, died on the Cross to pay the wages of those sins, and saved us by being resurrected from the dead. This is the implication of the burnt offering of the Old Testament. The ancestors of faith building the altar of the burnt offering long ago, and us building the altar of the burnt offering by believing in the sacrifice of Jesus now are the same spiritually. People of faith in the Old Testament received the remission of their sins by believing that the Messiah would come and save them; and so they offered up sacrifices by building the altar of burnt offering. The faith of these people was the same as our faith now spiritually. It is because they offered up burnt offerings believing that Jehovah God would send the Savior to this world in the future and that He would pass all the sins of humanity onto this Savior through the baptism and save all humanity like this. They received salvation by believing in the things that would manifest in the future, and we receive salvation by faith of believing in all the work Jesus has done.
As was prophesized in the Old Testament, Jesus came to this world, received all the sins of this world through the baptism John the Baptist gave to Him, and paid the wages for all those sins by dying on the Cross. And Jesus was resurrected from the dead in three days and ascended to the Kingdom of Heaven. Everyone who believes in this fact and gives thanks and praise to God is like a person who offers up a sacrifice to God through the sacrificial Lamb, Jesus Christ. The Words in the New Testament tells us, “God is Spirit, and those who worship Him must worship in spirit and truth” (John 4:24). Believing in all the work Jesus has done and accepting the gospel of the water and the Spirit is in fact offering up a spiritual worship to God in spirit and truth.
I want you to remember that Abraham built the altar of the burnt offering for Jehovah God. This is the sacrifice Abraham offered up to God to commemorate Jehovah God after entering the land of Canaan. After he had entered the land of Canaan according to the promise of God, he called on the name of Jehovah God, praised and worshipped Him. And God approved him as the ancestor of faith. We must remember this and think again of the meaning of the gospel of the water and the Spirit that Jesus fulfilled for us.
If the sacrifice of slaughtering an animal and cutting it into pieces and offering it up as a burnt offering was the way of worshipping God in the Old Testament era; likewise living in the gospel of the water and the Spirit is our spiritual worship we offer up to God today. I want you to offer up this worship to God in spirit and truth.
Terms and Conditions Privacy Policy Cookie Declaration Contact Us