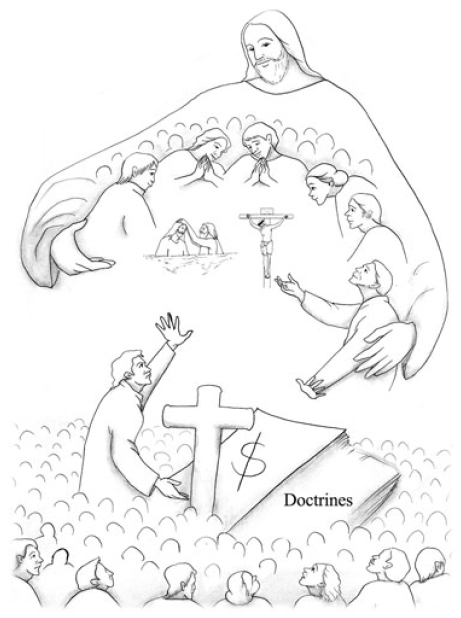 (Genesis 12:5-20)
“Then Abram took Sarai his wife and Lot his brother’s son, and all their possessions that they had gathered, and the people whom they had acquired in Haran, and they departed to go to the land of Canaan. So they came to the land of Canaan. Abram passed through the land to the place of Shechem, as far as the terebinth tree of Moreh. And the Canaanites were then in the land. Then the LORD appeared to Abram and said, ‘To your descendants I will give this land.’ And there he built an altar to the LORD, who had appeared to him. And he moved from there to the mountain east of Bethel, and he pitched his tent with Bethel on the west and Ai on the east; there he built an altar to the LORD and called on the name of the LORD. So Abram journeyed, going on still toward the South. Now there was a famine in the land, and Abram went down to Egypt to dwell there, for the famine was severe in the land. And it came to pass, when he was close to entering Egypt, that he said to Sarai his wife, ‘Indeed I know that you are a woman of beautiful countenance. Therefore it will happen, when the Egyptians see you, that they will say, ‘This is his wife’; and they will kill me, but they will let you live. Please say you are my sister, that it may be well with me for your sake, and that I may live because of you.’ So it was, when Abram came into Egypt, that the Egyptians saw the woman, that she was very beautiful. The princes of Pharaoh also saw her and commended her to Pharaoh. And the woman was taken to Pharaoh’s house. He treated Abram well for her sake. He had sheep, oxen, male donkeys, male and female servants, female donkeys, and camels. But the LORD plagued Pharaoh and his house with great plagues because of Sarai, Abram’s wife. And Pharaoh called Abram and said, ‘What is this you have done to me? Why did you not tell me that she was your wife? Why did you say, ‘She is my sister’? I might have taken her as my wife. Now therefore, here is your wife; take her and go your way.’ So Pharaoh commanded his men concerning him; and they sent him away, with his wife and all that he had.”
Abraham took all his family including his nephew Lot, and all his possessions to the land of Canaan. But there were already other tribes living in this land, and these inhabitants were the descendants of Ham. Nonetheless, when Abraham reached Canaan, God appeared before him and said to him that He would give this land to him and all his descendants. Whenever Abraham arrived at a strange place, the first thing he did was to build an altar and offer up a sacrifice to God. He always offered up a sacrifice of faith first.

The People of God Are Blessed through His Church

After spending some time in the land of Canaan, Abraham left and went on to Egypt, and the Bible records similar incidents happening in the lives of three men of faith namely, Isaac, Abraham and Jacob, whose stories are so similar that they are almost like a carbon copy of each other. Here we need to find out what God is trying to say to us through these accounts. Faced with a severe famine, Abraham went down to Egypt even though God had told him not to do it, and when he arrived there he told the inhabitants living there that his wife was his sister, as he was afraid that he might get killed because of his wife. Isaac did the very same thing.
Here in Egypt, Abraham turned cowardly even though he had not been like this when he was in the land of Canaan. The Egyptian civilization in those days was highly developed. So it was not an easy country to deal with. Since the Egyptian civilization had already entered the Iron Age, for Abraham a nomad, it was clearly too strong an opponent. He had gone into the land of Egypt in search of food because of the famine he was experiencing and to find good pasture land for his flock. But when he saw how advanced the Egyptians were, he realized that he was in for a rough ride. And on top of this the Egyptians were impressed with his wife’s beauty and they were keenly interested in her. In those ancient times, when a man traveled to a foreign land accompanied with his wife, it was not unusual for the inhabitants of that land to kill the traveler and take his wife. That is why Abraham felt so threatened. So he told his wife not to call herself his wife, but his sister.
Abraham’s wife was then taken to the palace of Pharaoh, probably to be offered to him as one of his concubines. His subordinates had taken her to Pharaoh as she was extremely beautiful, and the king was also very pleased to see her. How did Pharaoh treat Abraham when his wife was brought to him? He rewarded him with many things, such as oxen and sheep. Abraham received them all.
But soon God brought down a great plague on Pharaoh’s palace. Although we don’t know exactly what kind of plague this was, we can surmise that it was a disastrous plague, and Pharaoh realized why this had happened. That is because God had taught him. Although it’s not written here in the Bible, through this plague Pharaoh realized that God had brought it upon him because he had taken Abraham’s wife. So Abraham’s wife was sent back to him, along with many treasures. And as a result of this, Abraham became very wealthy all thanks to his wife.

The Same Thing Happened with Isaac, the Son of Abraham