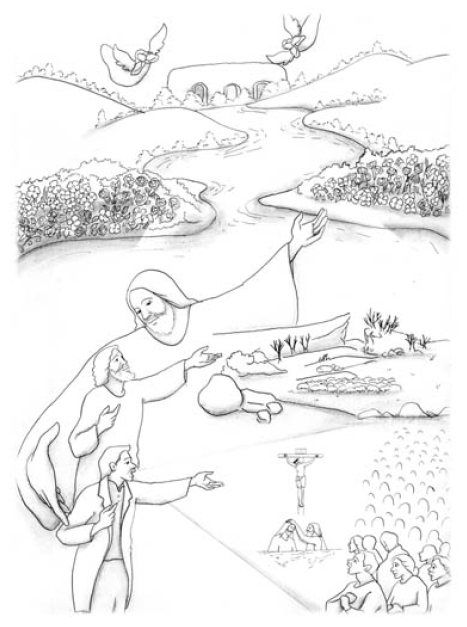 The People of Faith Want to Dwell Together

We who have received the remission of sins in our hearts by believing in the gospel of the water and the Spirit can also be placed in a similar situation as that of Abraham. Although we live together on this earth with people who have as yet not received the remission of their sins and also continue to spread this gospel to them, it is very possible to be under this same conflicting relationship, and so we cannot live together with them, just as Abraham and Lot had fought with each other because of their livestock. Truly there is a great difference between those whose main purpose is the work of spreading this gospel of God, that is, people like Abraham, and those who just pursue material things like Lot. In the beginning, the start may be the same or similar. But later on their hearts will differ greatly, and they won’t be able to dwell together any longer.
It is the same with people abiding together inside the Church of God. On the one hand we find people perfectly pursuing the Spirit by spreading the gospel of the Lord, but there are others, regardless of what they do, ultimately pursue money and seek only their own fleshly desires. These people who have received the remission of their sins can live together but it all depends on whether they are able to unite their wills, and it solely depends on the state of their faith. It is just like Abraham and his nephew Lot having had to separate from each other due to the difference in their faiths. In the beginning Lot stayed with his uncle because he was good for him. And Lot followed Abraham even more so because he was able to find out about God and believe in Him because of his uncle. Abraham wasn’t the one who had guided him at first. I think Lot had lived relying on his uncle, but when Abraham was leaving his homeland, Lot decided to leave with his uncle. They amassed many material things after leaving their homeland. In other words, they became rich. It was as if Lot had realized all his dreams. In this state of fulfillment of all his dreams, Lot no longer needed to follow his uncle anymore. His uncle had started to become the most cumbersome thing, according to his objective.
Under this unbearable situation Abraham said to Lot,” Please separate from me. If you take the left, then I will go to the right; or, if you go to the right, then I will go to the left” (Genesis 13:9). When we read these words, I think Abraham’s heart was already assuredly set, a heart of knowing that he could no longer be together with Lot anymore. And so, just like that Lot left Abraham and set off to the land of Zoar. And so God said, “At the time, in the land of Zoar, people were exceedingly wicked,” and “They were terrible sinners before God.” Like these Words of God, Lot became the forerunner of people chasing after worldly materials.
Because of this God said that He would pass judgment on the land of Zoar, but Lot nevertheless went there and lived amongst the indigenous people of Zoar. When the time had passed and God was about to destroy the land of Zoar, that is, the land of Sodom and Gomorrah according to His Word of promise, He delivered Lot as well as his wife and his daughters. But Lot’s wife, who did not believe in God’s Word, looked back and because of this, she turned into a pillar of salt. What happened later on to the daughters who were left? They had a sexual relationship with their own father, thus ensuring his descendants. And their descendants became the Moabites and the Ammonites that stood against Israel for a long time. Amongst the nations that opposed the Israelites, their greatest enemies were none other than these Moabites and Ammonites. Through the origins of these two Gentile tribes, God is telling us what the result would be like for those who just chase after material things.

Where Do You Place Your Life’s Purpose?

You and I started out our life of faith by serving this Lord-given gospel. Even as we started out on this right path we must constantly think about “Where do I place my life’s purpose?” If someone’s purpose lies in just material things, then that person would solely be looking for opportunities to gain much material things. Once he gains sufficient wealth, he will no doubt start to throw out his faith and belief regardless of how precious it is. If this is the case for us, whose purpose lies only in the service of the gospel and following the Lord, then what kind of action must we choose? We should depart from them resolutely. Abraham said to Lot, “If you take the left, then I will go to the right; or if you go to the right, then I will go to the left.” This kind of attitude is the genuine faith.
At the time when Abraham perceived his nephew Lot’s heart, he concluded that everything regarding Lot’s faith was already finished. Lot, who was in conflict with Abraham by just pursuing material things, had probably displayed his wishes to depart. Even though he might not have said so directly, he probably was looking for an opportunity having previously expressed his wishes to depart from his uncle. After seeing and experiencing such behavior, what did Abraham our father of faith say to him? He said, “Please separate from me. He did not hesitate, but told him clearly, please separate from me. You can make the choice. Looking at this whole land Lot, if you take the left, then I will go to the right. If you choose the higher place, then I will go to the lower place; or if you go to the plains below, then I will go to the mountainous area.” Then hearing those words from Abraham and seizing the opportunity, Lot said he will choose the land of Zoar.
Back then the land of Zoar was highly fertile. In today’s Scripture reading, it is described as a place that was well watered just like the land of Egypt. It means that this land was remarkably fertile. Because Lot took that fertile land, Abraham now had to leave him there and go up into the mountainous areas. In other words, Lot told him that he would take that land with these calculations in mind. Although Abraham and Lot had been together, they were separated in the end because of Lot’s calculating motives.
After the departure of his nephew, God appeared before Abraham and granted him blessings and grace by saying, “Lift your eyes now and look from the place where you are—northward, southward, eastward, and westward; for all the land which you see I give to you and your descendants forever” (Genesis 13:14-15). God is faithful to those who are faithful to Him.
I must tell you that I have experienced many difficulties whilst serving the gospel. The truth is that at times I became vexed and thought, “Can’t I just live for my flesh in comfort?” But if the born-again do not possess the purpose of trying to spread the gospel, then what fun would there be in their lives? If one were to try to eat and live well only for oneself, then really what reason would there be for living? All one has to do is to conquer a certain field, once done you live off of that. And then after having gathered a certain amount of wealth, all that's left to do is to ride around in a luxurious car and travel around the world playing golf with a couple of secretaries. Of course, it is possible only when God gives permission for this. It isn’t something that can just simply be done. If God does not grant us material abundance, what then would happen? With a liquor bottle in one pocket, we will roam about this alley today and that alley tomorrow, making loud noises at the top of our voices, and then in the end having been exposed to cold weather, we will die of hypothermia and leaving one line in the newspapers of this meaningless death. That person will become a source of trivial news that reads, “Some man froze to death while sleeping in an alley.” If the born-again do not set their lives’ purpose properly, then in the end they will end up dying like this.

We Must Set Our Objective Well

Lean Your Heart towards God