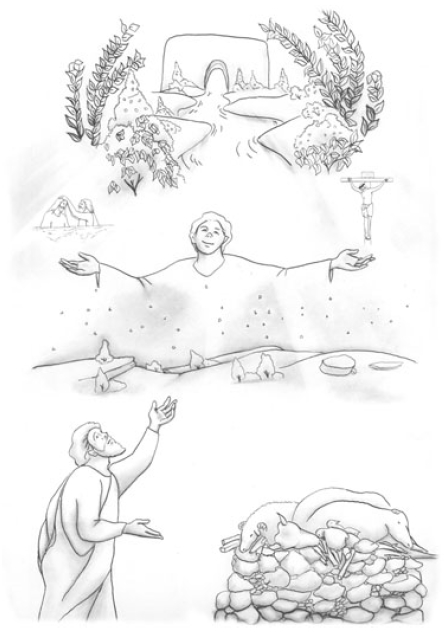 True Faith Is to Believe in Hope in a Hopeless Situation

If someone’s faith is approved by God, that faith is indeed a great faith. This faith of Abraham appearing in today’s Scripture passage received such approval from God. Dear fellow believers, what do you think the reason for that is? It is because Abraham had unwaveringly believed in the Word of God contrary to hope.
When Abraham left his homeland, Ur of the Chaldeans, and arrived in the land of Canaan, he was seventy-five years of age. Afterwards he sold off his wife, accumulated much wealth because of that event, separated with his nephew Lot because of that wealth, and rescued Lot and his wealth by fighting with King Chedorlaomer. These various events could be calculated as having occurred within a period of about a year. It is quite possible that all these events could have occurred within a one year period following their entering of the land of Canaan.
God appeared before Abraham and said to him, “I will make your descendants be as numerous as the stars of heaven.” This happened when Abraham had turned 76, one year after having left his homeland; so the question is, how long did it take for this promise to be fulfilled? Since Abraham had his child Isaac at the age of 100, the promise was fulfilled only after 24 years had passed. It is truly a long period of time. But Abraham clearly believed that the promise of God would be realized some day. God said, “Eliezer of Damascus is not your heir. I will surely grant you a child from your own body. See if you can count the stars of heaven. I will make your descendants be as numerous as those innumerable stars of heaven.” At that time, God had Abraham look up towards the serene world of stars and told him that He will make his descendants be as numerous as those stars. And our father of faith Abraham relied on that promise of God in his heart without a hint of doubt despite this long passage of time.
Because Abraham believed like this, Jehovah God accounted this to him for righteousness. Referring to his faith, Jehovah said that it was the most correct faith. Though he was very old and did not have any children, he believed in the promise of God, where God said that He would grant him numerous descendants, this was contrary to hope. It is said, “Now faith is the substance of things hoped for, the evidence of things not seen” (Hebrews 11:1). From a fleshly perspective it could never be fulfilled. But to believe that it will be realized because of God’s spoken Word, we can hope for something in our hearts; this is precisely what genuine faith is all about.
Actually, Abraham had another child named Ishmael who was born through a maidservant about 10 years after that promise. But this was not the son of the promise. The promise of God was fulfilled only after 24 years. Because God blessed Abraham, this promise was only fulfilled after 24 years had passed, but even before it was realized, Abraham had faith in this promise of God in his heart and had the evidence of faith in him. The Word of promise God had given him was the unwavering evidence which was firmly rooted deep in his heart. He believed unwaveringly by professing, “Through my wife, God will surely grant me a child and also many descendants like the stars of heaven.” For old Abraham to obtain many descendants seemed impossible from a human point of view, but despite all this, Abraham believed in the Word of God as it was spoken to him.

We Must Carry Out Spiritual Work by Faith

Do You Believe That the Kingdom of Heaven Does Exist?

Dear fellow believers, do you believe that there is Heaven? Do you believe in the fact that this Kingdom of Heaven is actually yours? Do you believe that the Kingdom of Heaven is a place that has been prepared just for you? If you believe that there is a Kingdom of Heaven, then you must also realize that hell exists as well. Jesus told us that He will gather up the grain, thrash them, and then gather the wheat into His barn but He will burn the chaff with unquenchable fire. Like this, hell does exist and there clearly is the Kingdom of Heaven. God is Spirit, but He isn’t someone who exists only in our imagination. God actually built a holy world that is substantial, and He now resides there. I want you to know and believe in the fact that there clearly is a place called the Kingdom of Heaven and a place called hell.
Our Lord promised that He will give the land of Canaan to Abraham and to his descendants as an inheritance. How did He show us evidence of this promise? God said, “Bring Me a three-year-old heifer, a three-year-old female goat, a three-year-old ram, a turtledove, and a young pigeon,” and Abraham offered them up to God. Then appearing like fire God passed between them. Through these offerings, that is, through the sacrificial offering of Jesus Christ who offered Himself with His water and blood, God promises that He will surely give the Kingdom of Heaven to those who have been born again by believing in Him. Dear fellow believers, without the burnt offering you and I cannot receive the remission of our sins. After taking all our sins through His baptism, Jesus went on His own accord up to the altar of burnt offering and saved believers in Him by vicariously receiving all the judgment for our sins, and rose up from the dead in three days. He received the baptism to take on all our sins. After that, He died and received the full judgment for us. Like this, the burnt offering which was laid on the altar of burnt offering signifies the fact that the Lord has saved us by offering His own body as our propitiation. This is why God was telling Abraham to bring Him those specific burnt offerings. And by appearing on top of them, God was showing Abraham the definite proof of His promise that He will surely grant him Heaven.
I believe that Heaven clearly has spatiality. I believe the fact that when we die, we the born again will go to that place. Today the Lord told us about this truth through the promise He had made to Abraham. Thus, we who are to enter the Kingdom of Heaven must first carry out this spiritual work, that is, the work of God as we go on living on this earth. As we carry out this spiritual work, even if fleshly things should arise within us, they will be buried under the heap of spiritual work and no longer be a problem before God. I want you to realize this fact.
Abraham believed only in God and followed after Him. Hence, he walked by the righteous path. I have this understanding that we must also be like this. By persistently carrying out spiritual work, we must throw away our fleshly lacking. But if we neglect in carrying out this spiritual work, we will one day be buried in our filthy flesh. The born-again must be like Abraham. I believe if we listen to and follow after the Word of God like Abraham, our entire life will be immersed in this spiritual work, and all our fleshly worries, troubles, lacking and weaknesses will naturally disappear away completely.
I am hoping that I will personally meet those righteous servants of the Lord like Abraham, Moses, the Apostle Paul, and so on in the Kingdom of God. By then of course, I will be able to recognize them not in the flesh but in the spirit. I don’t know what the image of Heaven is like, but one thing clear is, if we hold fast onto and follow after the Word of the Lord to the very end we will surely go to Heaven. Abraham continued to walk towards God by following the Word of God, and for this he was able to receive many blessings from God. I believe if we would carry out this spiritual work, all our weaknesses and lacking will be buried under the heap of spiritual work and disappear. I believe, if we continue to pursue this spiritual work, and if we believe in and follow only the Word of God, our hearts will be filled with faith of believing in God even more. I believe that God will become a great strength for us, cover up all our lacking, and allow us to bear much spiritual fruits.
Because I am holding many revival meetings at each branch Church these days, I am able to meet you only on weekends, but I want you to go living immersed in this spiritual work by all means. Do not look towards your own weaknesses. One’s own weaknesses cannot be fixed by one’s own will. Just continue to do the work of God. Follow the Word of God by faith and be immersed in God’s work. If you do this I believe you and I can become great fathers of faith just like Abraham.
Terms and Conditions Privacy Policy Cookie Declaration Contact Us