Subject 19 : The Epistle of Paul the Apostle to the EPHESIANS 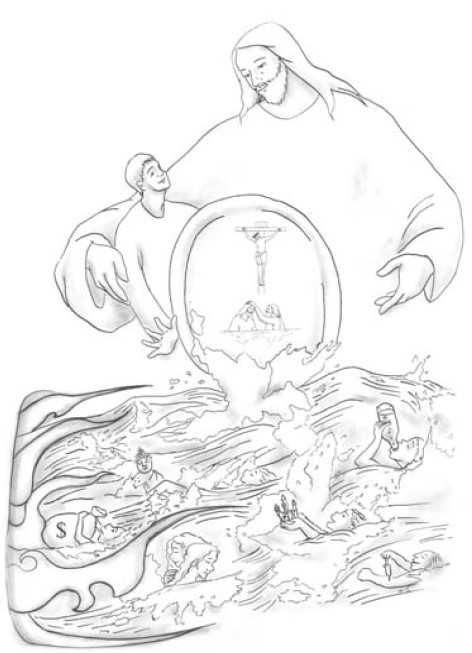 (Ephesians 5:1-14)
“Therefore be imitators of God as dear children. And walk in love, as Christ also has loved us and given Himself for us, an offering and a sacrifice to God for a sweet-smelling aroma. But fornication and all uncleanness or covetousness, let it not even be named among you, as is fitting for saints; neither filthiness, nor foolish talking, nor coarse jesting, which are not fitting, but rather giving of thanks. For this you know, that no fornicator, unclean person, nor covetous man, who is an idolater, has any inheritance in the kingdom of Christ and God. Let no one deceive you with empty words, for because of these things the wrath of God comes upon the sons of disobedience. Therefore do not be partakers with them. For you were once darkness, but now you are light in the Lord. Walk as children of light (for the fruit of the Spirit is in all goodness, righteousness, and truth), finding out what is acceptable to the Lord. And have no fellowship with the unfruitful works of darkness, but rather expose them. For it is shameful even to speak of those things which are done by them in secret. But all things that are exposed are made manifest by the light, for whatever makes manifest is light. Therefore He says: ‘Awake, you who sleep, Arise from the dead, And Christ will give you light.’”
Today’s Scripture reading shows that the Apostle Paul was ministering to the saints in the Church of Ephesus. He spoke to them about how they ought to abide by their knowledge of and faith in the gospel of the water and the Spirit, what they ought to be careful of, and for what and how they ought to live. To nurture the flock there, Paul said to the Ephesian saints, “Therefore be imitators of God as dear children” (Ephesians 5:1).

Be Imitators of God as His Beloved Children

Ephesians 5:1 is a brief but crucial passage: “Therefore be imitators of God as dear children.” That’s because this passage shows clearly how we ought to live. Since God has told us here to be His imitators, we need to examine here first who God really is and what His attributes are.
The Lord is the Son of God in Heaven. Although Jesus is God Himself, He loved us so much that He personally came to this earth and laid down His life for us. By thus sacrificing Himself, He has remitted away all our sins. Like this, the Lord is our Savior who has made us righteous.
Moreover, the Lord has saved us not only from the sins of the world, but also from the condemnation of sins and destruction. He had come to this earth to free us from all our sins, and by offering Himself to God the Father, He has blotted out all our sins; and the Lord has thereby delivered us from all the condemnation, curses, and destruction that we had to face for our sins. As we have thus received the remission of sins and been delivered from our destruction, curses, and condemnation thanks to the Lord, we have now become God’s own children, and we have also received all the spiritual blessings enjoyed by the children of God. In short, the Lord has adopted us as God’s children so that we would receive and enjoy all the spiritual blessings in the heavenly places.
Remember what the Apostle Paul said to the saints in the Church of Ephesus. He said that they ought to be imitators of God. What does it then mean to imitate the Lord in our lives and emulate what He has done for us on this earth? It means only one thing: The Apostle Paul is admonishing us to preach the gospel of the water and the Spirit in our lives.
There was a preceding servant of God before us who had lived solely for the spreading of the gospel in imitation of Jesus Christ, and this servant of God is none other than the Apostle Paul who wrote today’s Scripture passage. This implies then that if we imitate the Apostle Paul, we would imitate Jesus Christ Himself. Paul devoted all his life in spreading the true gospel of the water and the Spirit to every nation of the then known world. In emulating Paul, all of us should also dedicate all our hearts and devotion to spreading the gospel of the water and the Spirit day and night.
What did the Lord want to do for us when He came to this earth? He wanted to blot out all your sins and mine. What did He then do to eradicate all our sins? He sacrificed Himself for us. God had sacrificed Himself to give us heavenly blessings. Therefore, all of us who have received the remission of sins ought to also sacrifice ourselves to preach this gospel of the water and the Spirit to those who still have not been remitted from their sins yet.
While ministering on this earth, the Apostle Paul admonished his flocks to imitate Jesus Christ, so that their faith would grow. Put differently, Paul is teaching us here that since Jesus Christ has saved us from all the sins of the world and given us heavenly blessings by sacrificing Himself, we ought to also sacrifice ourselves in imitation of the Lord for the salvation of other souls.
Now that you and I have received the remission of sins, it would be completely mistaken for us not to live for the spreading of the gospel of the water and the Spirit. If you and I have really received the remission of sins by believing in the gospel of the water and the Spirit, then it is only a matter of course for us to live for the gospel. Given the fact that we the believers in the gospel of the water and the Spirit have received God’s grace and love freely, it is only fitting that we should offer this gospel of salvation freely to all who still don’t know this genuine gospel. If we have truly been saved from all our sins, it’s only our natural calling to devote our lives to this endeavor.

If You Follow Your Lust Wholly, You Cannot Be an Imitator of God

I preached from Ephesians chapter 4 this afternoon, and in this chapter the Lord teaches us we should put off, concerning our former conduct, the old man which grows corrupt according to the deceitful lusts (Ephesians 4:22). We should not follow the course of the world even though we once walked according to it (Ephesians 2:2). That’s because if we follow the course of this world and its currents, we would end up worshipping idols just like worldly people. We should never allow ourselves to follow the course of the world; if we do so, we will only end up forsaking God to be destroyed. The people of the world follow their greed as though it’s their sole purpose in life to commit sin, but we should never partake in this. It’s inconceivably shameful for any righteous saint to follow the course of the world rather than being faithful to the way of the righteous. Far from following the course of the world, we ought to change its direction with God’s Word of Truth. We ought to resist the course of the world and steer it to the righteous path.
It’s very dangerous for us to flow with the sinful currents of this world and follow its fleshly direction like everyone else. That’s because our hearts would be hardened just like worldly people. If it’s by yourself that you step into the current of the world a little bit, you can still realize your mistake, turn around, resolve your heart, and resume following the Lord. However, if you join your hand with the people of the world, it will be extremely difficult for you to turn around; as there is no way that these people would let you go. If we like what worldly people like and dislike what they dislike, then how would we be any different from the children of Satan who have not received the remission of sins from God? To be with the people of the world is to become just like them. Take a look at worldly people. It’s an ingrained norm for them to dislike the righteousness of the Lord, reject the way of salvation, and despise anyone who preaches the gospel. So how could we ever allow ourselves to commit sin with them and follow their way of life? We should never side with them.
There is much that we need to learn from today’s Scripture passage. Just as Paul admonished us, we have to think about what we can do to please the Lord, walk circumspectly as wise rather than fools, and redeem the time. Now that we have met the Lord, we must continue to walk with Him until the day we take our last breath. And as we carry on with our remaining lives, we must redeem the time to preach the gospel diligently so that it would reach each and every corner of the world. In due time, this world will turn unlivable, and so before this actually happens, we ought to think about how we should conduct ourselves to live wisely and redeem the time we now have.
The Lord said in Ephesians 5:15-21: “See then that you walk circumspectly, not as fools but as wise, redeeming the time, because the days are evil. Therefore do not be unwise, but understand what the will of the Lord is. And do not be drunk with wine, in which is dissipation; but be filled with the Spirit, speaking to one another in psalms and hymns and spiritual songs, singing and making melody in your heart to the Lord, giving thanks always for all things to God the Father in the name of our Lord Jesus Christ, submitting to one another in the fear of God.”
What exactly is a truly wise life? In the Apostle Paul’s days, Ephesus was an infamously decadent city. This city was located in the seashore of south western Turkey. This city was very prosperous in Paul’s days and also famous for its temple of Artemis and various other temples of Greek gods (Acts 19:35). There were many priestesses in these temples to administer sacrificial rituals for the citizens of Ephesus to worship their idols. But these priestesses were actually little more than prostitutes, as the people who came to the temples to offer sacrifices to their pagan gods engaged in sexual activities with the priestesses as a religious ritual. Idolatry is almost always related with sexual immorality. This shows just how sinful and filthy Ephesus was.
Yet even in such a time when practically every Ephesian was engaged in sexual debauchery, there still were some people who believed in Jesus. So, through the Apostle Paul, the Lord taught these faithful children of God how they ought to live amid so many sinners. God told the Ephesian saints not to associate with any sinners. Far from partaking in the lewd activities of such sinners, God told them to be spiritually minded, to redeem the time, and to devote all their energy to what was pleasing to the Lord.

Should We Not Lead Such a Godly Life as the Lord Told Us?