[Chapter 7-4] Admit Your Fundamentally Sinful Nature and Ask God For His Grace of Salvation (Mark 7:18-37) 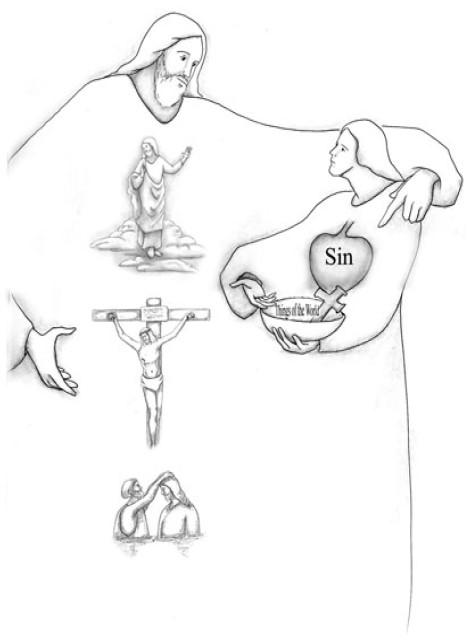 Why Jesus Spoke So Harshly to the Syro-Phoenician Woman

Before Receiving the Remission of Sins by Hearing and Believing in the Gospel of the Water and the Spirit, You Must First Distance Yourself from the False Prophets

Let’s now turn to the second event recorded in today’s Scripture passage. It’s written in Mark 7:32, “Then they brought to Him one who was deaf and had an impediment in his speech, and they begged Him to put His hand on him.” It’s written here that some people brought a deaf man with an impediment in his speech, and they begged Jesus to heal him. Here we need to pay particular attention to the fact that when Jesus healed this man; He took him aside from the multitude.
Why did Jesus then take the deaf man aside and healed him far away from the multitude, instead of just healing him in full view of the crowd? This implies that if you really want to receive salvation from our Lord, obtain the remission of your sins, and find His grace, then you must depart from all false prophets first. In other words, no one should be with any false prophets when our Lord is offering His salvation to him. If you side with the false prophets, then even though the Lord is offering His grace of salvation to you, you cannot realize that this is the gospel of salvation nor believe in it, and therefore you cannot receive the grace of salvation either.
There are many records in the Bible showing that while our Lord Jesus was on this earth, He took aside disabled people such as the blind and the deaf to a secluded place and healed them from their ailments. This implies that when it comes to your salvation from sin, if you abide with those who do not believe in the gospel of the water and the Spirit, then you cannot receive the God-given salvation no matter how hard you try. That’s because these non-believers would obstruct you from having faith. Everyone who wants to be saved from all his sins must therefore separate himself from any and every false prophet, and only then can he receive grace from the Lord. This is what our Lord is teaching us now.
Let’s return to today’s Scripture passage. It is written that our Lord spat when He healed the deaf man with an impediment of speech. Where did the Lord spit at? A closer look at the passage shows that Jesus first put His fingers in the deaf man’s ear, spat in His hand, and then touched the man’s tongue.
There are other accounts elsewhere in the other Gospels where Jesus spat in His hands to heal the sick. For instance, John chapter 9 describes how Jesus opened a blind man’s eyes by spitting on the ground, making clay with the saliva, and putting the clay on the blind man’s eyes. Spitting usually carries a negative connotation. Across most cultures, to spit at someone is to show one’s utter contempt. It is one of the worst forms of insult that shows just how vile and filthy the other person is held. In Korea, some people also spit when they see something or someone disgusting. Perhaps it was out of a similar revulsion at people’s sins that Jesus spat, but regardless, the Bible shows clearly that it was not unusual for Him to spit and put His saliva on the tongues, ears, or eyes of the sick.
Looking up to Heaven, our Lord then sighed and said to the deaf man, “Ephphatha” (Mark 7:34). The word “Ephphatha” here means “be opened.” Please note here that Jesus sighed before saying it. It was out of pity that Jesus sighed; lamenting for the deaf man bound to destruction, for everyone is sinful and must therefore be cast into hell forever. But what happened after Jesus did all these things—that is, after He put His fingers into the deaf man’s ears, spat and touched his tongue, looked up to Heaven, sighed, and said to the deaf man, “Ephphatha (be opened)”? The Bible says that “immediately his ears were opened, and the impediment of his tongue was loosed, and he spoke plainly” (Mark 7:35).