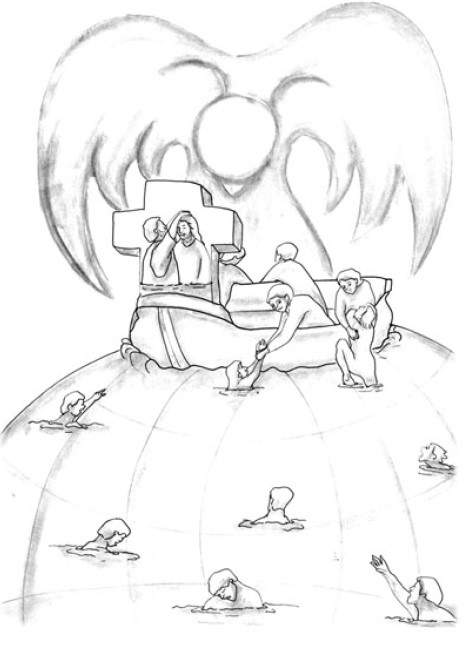 (Mark 8:27-38)
“Now Jesus and His disciples went out to the towns of Caesarea Philippi; and on the road He asked His disciples, saying to them, ‘Who do men say that I am?’ So they answered, ‘John the Baptist; but some say, Elijah; and others, one of the prophets.’ He said to them, ‘But who do you say that I am?’ Peter answered and said to Him, ‘You are the Christ.’ Then He strictly warned them that they should tell no one about Him. And He began to teach them that the Son of Man must suffer many things, and be rejected by the elders and chief priests and scribes, and be killed, and after three days rise again. He spoke this word openly. Then Peter took Him aside and began to rebuke Him. But when He had turned around and looked at His disciples, He rebuked Peter, saying, ‘Get behind Me, Satan! For you are not mindful of the things of God, but the things of men.’ When He had called the people to Himself, with His disciples also, He said to them, ‘Whoever desires to come after Me, let him deny himself, and take up his cross, and follow Me. For whoever desires to save his life will lose it, but whoever loses his life for My sake and the gospel’s will save it. For what will it profit a man if he gains the whole world, and loses his own soul? Or what will a man give in exchange for his soul? For whoever is ashamed of Me and My words in this adulterous and sinful generation, of him the Son of Man also will be ashamed when He comes in the glory of His Father with the holy angels.’”
While Jesus was on this earth, it seemed as though He was also conscious of what people thought of Him. Perhaps for this reason Jesus asked His disciples while traveling to various towns to preach, “Who do men say that I am?” So the disciples answered, “Some say Elijah, others says John the Baptist, and still others think you are one of the prophets.” Jesus then asked them again, “Then who do you say that I am?” Peter then responded and said, “You are the Christ.” The word Christ here means that Jesus is the King of kings, our Savior and our God, but at the same time, He is also the Son of God Almighty.
After hearing Peter confessing his faith in front of the other disciples, Jesus openly told them that He would soon be rejected by the elders, chief priests, and scribes, and that He would be killed but rise again in three days. He told them, “Soon I will be rejected by the elders, scribes and chief priests of the day. But I will rise again after my death.” Peter, being an impatient and hot-tempered man, objected when he heard this and said to Jesus, “Far be it from You, Lord; this shall not happen to You!” (Matthew 16:22)
Our Lord told the disciples what He would do, and what sacrifices He would make for the sake of every soul in the world. He told them that He would sacrifice Himself in order to save the entire human race, enduring suffering and giving up His body on the Cross. Although Peter loved Jesus very much, his love was still too fleshly, and so he tried to dissuade Jesus without thinking about the reason why He had come to this earth, saying to Him, “Teacher, You must not die, nor should You suffer. Why must You do this? This shall not happen to You!” Peter could not understand why his beloved Jesus would have to be rejected by the people and crucified to death. This is because Peter didn’t have a full understanding of the exact reason why Jesus had come to this earth. And even though Jesus promised that He would not just die but would also rise up from the dead for sure, Peter just could not believe this, and he was gripped only by the fact that Jesus would die. Of course, our Lord rebuked Peter for this.

Our Lord Came to This Earth to Fulfill His Work

For Whom Are You Laboring?