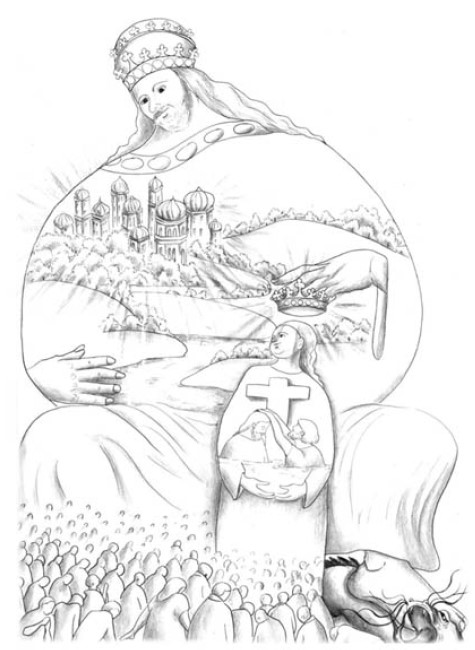 Who Can Receive This Faith That Allows One to Enter Heaven?

Answering this question, Jesus said the following: “With men it is impossible, but not with God” (Mark 10:27). As Jesus Christ said here, our Lord has saved us by bearing all the sins of the human race through His baptism and being condemned for all these sins on the Cross. That is why He said here that salvation is possible only with God. This means that everyone must understand and believe in the Lord’s work of salvation. Through today’s Scripture passage the Lord is teaching us that we should not set our minds on just the visible and physical world.
It’s not just our bodies that were made in the image of God. The souls that are in our hearts were also made in the image of God. When God created man in the beginning, He made his body first, and then breathed into his nostrils the breath of life. This breath of life denotes the living Spirit of God. It’s because we have this spirit that the Bible says that man was created in the image of God. Therefore, just as God is forever living, human beings are also forever living as spiritual beings. Therefore, if you really want to enter the Kingdom of Heaven by faith and live there forever, then you must not allow your heart to be oriented solely towards this visible world and get greedy over its riches. It’s inevitable if this happens that people will lose sight of the Kingdom of Heaven, and that is why our Lord said here that it’s more difficult for a rich man to enter Heaven than for a camel to go through the eye of a needle.
The Lord has given the gospel of the water and the Spirit to everyone so that all may be able to enter the Kingdom of God, rich and poor alike, for He wants to save everyone from sin. He wants to remit away all the sins of those who listen to the Word of God instead of setting their minds on just this world, such as its fleshly and material riches. That is why He has saved us perfectly from all our sins through His work of salvation, by being baptized and crucified to death. God has thus made it possible for us to enter His Kingdom through our faith in this salvation which was fulfilled by Jesus Christ.
In fact, every Word of God including the Lord’s work of salvation is contained in the gospel of the water and the Spirit. But sadly too many Christians in this world are still interested in material prosperity alone, even as they claim to believe in the righteousness of God and carry out His work. Although the Lord’s Word has nothing to do with their fleshly concerns, these people cannot cast aside their greed for the world. Even as such people are completely ignorant of the righteousness of God, they are full of greed for carnal and material prosperity. Since these “nominal Christians” are solely interested in their own material prosperity, their faith is not one that is placed in the righteousness of God, but it is nothing more than simple greed. Therefore, you should be particularly wary of someone who preaches the following: “You can go to Heaven only if you serve Jesus faithfully and offer a lot of money to Him. Only then can you be saved by God.” Such sermons are not the genuine teachings based on the pure Word of God. These sermons are given just to rob the congregation of money. Our Lord is the Lord of righteousness who has nothing to do with such false preachers. The Lord made not only this present world that is visible to our eyes, but also the invisible dominion of Heaven. Therefore, the Word of Scripture is fundamentally far removed from our fleshly affairs.

Whose Faith Is Carnal and Materialistic?

It is the fleshly people who make a god according to their own thoughts and pray to this god of their own making to bless them, trying to ensure their material prosperity through this. In other words, they create religions for their own material prosperity, out of their desire to enjoy a wealthy life. This is the fundament motivation for all the religious people of this world. Ultimately, these religious people just seek their own material prosperity. For such people who are interested only in the riches of this earth rather than the righteousness of God, it’s absolutely impossible to enter the Kingdom of God.
Therefore, all who think or say that you can receive many rewards from God only if you store treasures in the Kingdom of God by offering a lot of money to their churches are liars. Such preachers emphasize that one must offer a lot of money to enter Heaven, rather than admonishing their congregation to believe in and preach the righteousness of Jesus. In a church led by such a leader, anyone who offers a lot of money is automatically given a great deal of respect, called a deacon or even an elder. Worldly Christians love it when they are given a title and are called elder so-and-so or deacon so-and-so. And once they receive such titles, they turn arrogant and try to meddle in church affairs, saying haughtily, “This church could not run if I stopped my donations. Had I not offered $100,000, how could the church have purchased that bus?” Such nominal Christians’ faith is not genuine but only religious, and their ultimate end is money itself. These people cannot discover the righteousness of God even if they opened the Bible and read the Word of God.
Our Lord has no interest in such shallow people. It’s not this temporal world that our Lord speaks of, but it is the dominion of the righteousness of God. In today’s Scripture passage, the Lord said that those who are interested in their own material prosperity alone, rely on their own money, and try to reach Heaven by offering their material possessions to God can never enter His Kingdom. He said clearly here that one reaches the Kingdom of Heaven only by believing in the righteousness of God, not by offering the riches of this world.
How did God fulfill His righteousness? The Bible says in John 3:16, “For God so loved the world that He gave His only begotten Son, that whoever believes in Him should not perish but have everlasting life.” As this passage says, God the Father saved the entire human race from all its sins by sending His Son to this earth and making Him accept all the sins of mankind by being baptized by John the Baptist, die on the Cross, and rose up from the dead in three days. This is the gospel of the water and the Spirit, the very righteous work that God has fulfilled for us. It proclaims that Jesus Christ has blotted out all our sins by coming to this earth, being baptized, dying on the Cross, and rising up from the dead. And God has made it possible for us to enter the Kingdom of Heaven on account of our faith in this gospel.

Have We Lost Our Everything to Follow the Lord?

What Is the Persecution for the Righteousness That the Lord Is Speaking of?