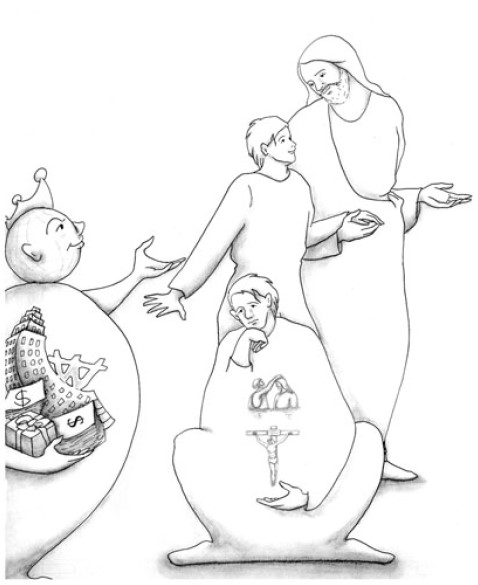 (Mark 10:35-52)
“Then James and John, the sons of Zebedee, came to Him, saying, ‘Teacher, we want you to do for us whatever we ask.’ And He said to them, ‘What do you want me to do for you?’ They said to Him, ‘Grant us that we may sit, one on your right hand and the other on your left, in your glory.’ But Jesus said to them, ‘You do not know what you ask. Are you able to drink the cup that I drink, and be baptized with the baptism that I am baptized with?’ They said to Him, ‘We are able.’ So Jesus said to them, ‘You will indeed drink the cup that I drink, and with the baptism I am baptized with you will be baptized; but to sit on My right hand and on My left is not Mine to give, but it is for those for whom it is prepared.’ And when the ten heard it, they began to be greatly displeased with James and John. But Jesus called them to Himself and said to them, ‘You know that those who are considered rulers over the Gentiles lord it over them, and their great ones exercise authority over them. Yet it shall not be so among you; but whoever desires to become great among you shall be your servant. And whoever of you desires to be first shall be slave of all. For even the Son of Man did not come to be served, but to serve, and to give His life a ransom for many.’ Now they came to Jericho. As He went out of Jericho with His disciples and a great multitude, blind Bartimaeus, the son of Timaeus, sat by the road begging. And when he heard that it was Jesus of Nazareth, he began to cry out and say, ‘Jesus, Son of David, have mercy on me!’ Then many warned him to be quiet; but he cried out all the more, ‘Son of David, have mercy on me!’ So Jesus stood still and commanded him to be called. Then they called the blind man, saying to him, ‘Be of good cheer. Rise, He is calling you.’ And throwing aside his garment, he rose and came to Jesus. So Jesus answered and said to him, ‘What do you want Me to do for you?’ The blind man said to Him, ‘Rabboni, that I may receive my sight.’ Then Jesus said to him, ‘Go your way; your faith has made you well.’ And immediately he received his sight and followed Jesus on the road.”

A Fleshly Wish of the Disciples?

Someone Who Has a Spiritual Wish

What Is the Purpose of a Righteous Person Living in This World?