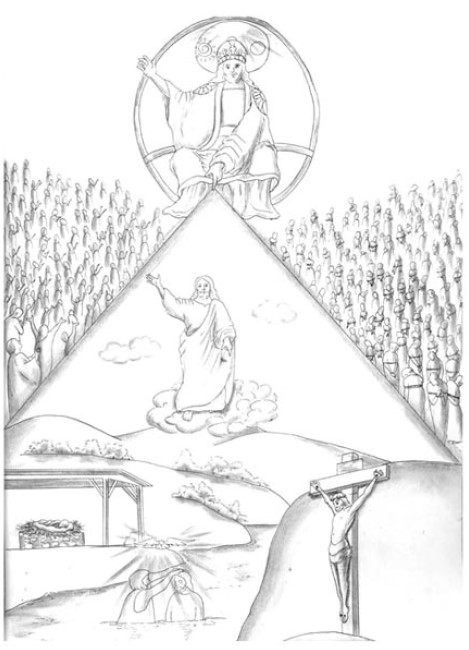 (Mark 12:18-27)
“Then some Sadducees, who say there is no resurrection, came to Him; and they asked Him, saying: ‘Teacher, Moses wrote to us that if a man’s brother dies, and leaves his wife behind, and leaves no children, his brother should take his wife and raise up offspring for his brother. Now there were seven brothers. The first took a wife; and dying, he left no offspring. And the second took her, and he died; nor did he leave any offspring. And the third likewise. So the seven had her and left no offspring. Last of all the woman died also. Therefore, in the resurrection, when they rise, whose wife will she be? For all seven had her as wife.’ Jesus answered and said to them, ‘Are you not therefore mistaken, because you do not know the Scriptures nor the power of God? For when they rise from the dead, they neither marry nor are given in marriage, but are like angels in heaven. But concerning the dead, that they rise, have you not read in the book of Moses, in the burning bush passage, how God spoke to him, saying, ‘I am the God of Abraham, the God of Isaac, and the God of Jacob’? He is not the God of the dead, but the God of the living. You are therefore greatly mistaken.’”

Whose God Has the Lord Become?

Many people in Jesus’ days did not understand His Word as they were spiritually ignorant. For instance, when Jesus said to the people of Israel to destroy the Temple of Jerusalem and told them that He would raise it up in three days, they were shocked to hear this as they took it literally, thinking that Jesus was mad. After all, it had taken them no less than 40 years to build the Temple. However, when Jesus was speaking of the Temple, He was actually speaking of His own body. He was saying to them, “When you put My body to death, I will rise up from the dead again.” It was in this context of His death and resurrection that Jesus spoke of the destruction and rebuilding of the Temple.
Jesus was baptized by John the Baptist to fulfill the righteousness of God. He thus bore all the sins of the world and was crucified to death while shouldering them. By being baptized in the Jordan River, Jesus accepted all the sins of the human race once and for all, and by dying on the Cross and rising from the dead, He has saved you and me and everyone else who believes in this Truth from all the sins of the world once and for all.
Everyone was born with a sinful flesh by nature. That is why sorrow afflicts everyone. It is indeed heartbreaking when one thinks about his sins and his certain death. But it’s not for any other reason that everyone is sad, it’s because everyone was born in this world with a sinful and weak flesh. We cannot free ourselves from this flesh, for we are only human. It’s because the flesh of man cannot be freed from sin and weakness that people constantly worry about ensuring their physical survival, and it’s because of the sins that they commit with their bodies and hearts that they are sorrowful throughout their entire lifetime.
Like this, it’s impossible for us to be completely insulated from sin as long as we live in this world. So long as human beings continue to have the flesh, they are all bound to be always weak and full of shortcomings, committing and living in sin all the time. This is the tragedy of the human race. And it’s because of this that our Lord had come to this earth to deliver such wretched beings like us from all the sins of the world. Through the baptism He received in the Jordan River, our Lord bore all the sins of the world that we have ever committed and will ever commit in this world from the moment we were born to the day we die, and He was condemned for our sins in our place by shedding His blood to death on the Cross. And He then arose from the dead. It was to take upon all our sins once for all that Jesus was baptized by John the Baptist. The very fact that the fundamental sinless Lord was baptized by John the Baptist to blot out all the sins of everyone in this world is the witness testifying that the Lord accepted each and every sin of the entire human race once and for all. By thus being baptized by John the Baptist, Jesus personally accepted all our sins onto His own body and washed them all away.
What washes away all the sins of everyone in this world? It is spiritual water that washes them away. Fire cannot cleanse away all the filth in the sewer no matter how fierce and strong it may be. It may burn some of the filth, but it cannot completely cleanse it away without destroying any part of the sewer itself. In contrast, water can wash away all the filthiness of this world completely, just as the rain sweeps away all the filth of the streets and carries it out into the sea.
Similarly, the spiritual water of our Lord is indispensable to wash away all the filthy sins of the human race. Jesus was baptized precisely for this reason, to bear everyone’s sins and wash them away for all who believe in the Lord. That is why He was crucified to death, and then arose from the dead in three days.

Why Did Jesus Rise from the Dead?

The Lord Has Risen from His Death