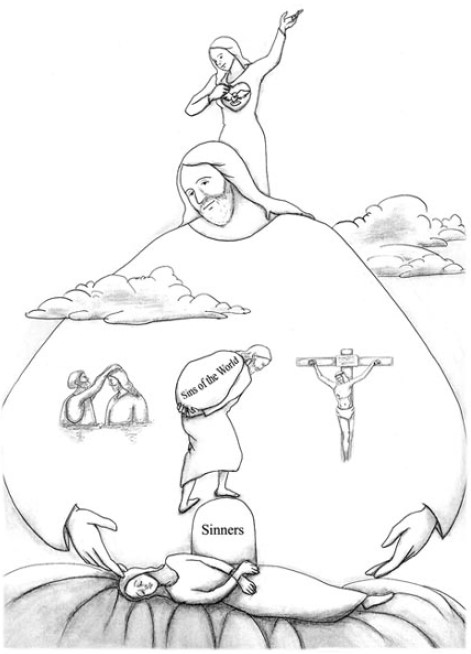 (Mark 12:18-27)
“Then some Sadducees, who say there is no resurrection, came to Him; and they asked Him, saying: ‘Teacher, Moses wrote to us that if a man’s brother dies, and leaves his wife behind, and leaves no children, his brother should take his wife and raise up offspring for his brother. Now there were seven brothers. The first took a wife; and dying, he left no offspring. And the second took her, and he died; nor did he leave any offspring. And the third likewise. So the seven had her and left no offspring. Last of all the woman died also. Therefore, in the resurrection, when they rise, whose wife will she be? For all seven had her as wife.’ Jesus answered and said to them, ‘Are you not therefore mistaken, because you do not know the Scriptures nor the power of God? For when they rise from the dead, they neither marry nor are given in marriage, but are like angels in heaven. But concerning the dead, that they rise, have you not read in the book of Moses, in the burning bush passage, how God spoke to him, saying, ‘I am the God of Abraham, the God of Isaac, and the God of Jacob’? He is not the God of the dead, but the God of the living. You are therefore greatly mistaken.’”

Whose God Is God?

How Do You Interpret This Passage?

Why Did God Reveal Himself in the Burning Bush?

That God revealed Himself as the burning bush implies that He had been with the people of Israel amid all their suffering and affliction for these 400 long years. God had been with the people of Israel all along when they were suffering for 400 years before entering the land of Canaan. It had been prophesied in the Scriptures that Abraham’s descendants would face suffering before entering the land of Canaan. After this prophesy was made, the Israelites indeed lived in this suffering for 400 years, but a few of them had faith in God and they were waiting for His deliverance.
However, most Israelites had lost God. In their suffering they had prayed to the God of Abraham, Isaac, and Jacob to deliver them, but they had seen no evidence that God was actually with them. Instead, their suffering in Egypt got even harsher. At that time, God manifested Himself to Moses and revealed to him that He had heard all the prayers and supplications of the Israelites, that He was the God of the faithful, and that as the Israelites were the descendants of the people of faith, He was their God. In other words, God told Moses that He was not the God of the dead but the God of the living. Spiritually speaking, this means that God is the God of the born-again.

Many people on this planet believe in God. There are many gods beside the only true God, but their divinity cannot be equal. Now then, let’s take a moment and think about how God is distinguished. Every Christian calls on the same name of God, regardless of whether one believes in the gospel of the water and the Spirit or not. But there is a fundamental difference here. When we call on God—that is, when the truly born-again people call on God—there is a special meaning to it. It means that God is our Father and our Savior, and He helps us and walks with us in our trials. We call on God’s name because we believe that He is with us in our everyday lives. That’s why the born-again call on the name of God, and that’s how they believe. This God is our God, and He is the God of the born-again.
God is not just anyone’s God. What did our Lord say? He said, “I am not the God of the dead, but the God of the living.” To put it in simpler terms, this means that although God exists even for those who have not been born again, He is not their God. God can be neither their Father nor their Lord, nor does He help them—in short, God is irrelevant to them.
When God called Himself as the God of Abraham, of Isaac, and of Jacob, He was saying that only the born-again are His people and His children. Abraham was born again of the Word, right? And Isaac inherited Abraham’s faith intact, didn’t he? Jacob also inherited the Word intact, and he became God’s child by His grace.
Let’s examine ourselves based on this Word. How is our God? Isn’t the God whom we call on now clearly distinct from the God called on by those who have not been born again? The God we call on for His help is indeed alive, and He has become the God of the born-again, their Father, and their Savior. He is the living God who is with us and helps us at all times. Do you believe in this Truth?
We often call on the name of God while carrying on with our lives of faith. And we come before His presence. It is by calling on the name of the Lord that we have received the remission of our sins in the name of our Lord Jesus Christ. Indeed, it’s because of what Jesus Christ has done for us on this earth that we have received the remission of sins. And on account of this work of salvation fulfilled by Jesus Christ, all the sins committed by us in our lives on this earth have been completely cleansed and removed from our hearts. Now, we can call God the Father as our Father thanks to the Lord Jesus Christ. Of course, temptations still come our way, we still have many weaknesses, and we may still commit sin and stumble, but despite all of this, we are in fact sinless and we can call God our Father. That we have absolutely no sin in our hearts is because Jesus Christ has become our God. We have become sinless, and only the sinless—that is, the saints—are eligible to become God’s children.
Although we have been born again, we still face many unbearable trials as we carry on with our lives in this world. Even those who have been truly born again are bound to face affliction constantly. The writer of Psalm says that there are many afflictions to the righteous (Psalm 34:19). The Apostle Paul endured even more suffering like this because he was born again. We also know from the Bible that Abraham had no choice but to leave his homeland because he had met God. Indeed, countless people were mistreated and persecuted like this because they had met God and followed Him.
Unbelievers do not realize that this God is alive, and that He has become the Father of the born-again, their Lord, and their Helper. But we the born-again must remember that God is none other than our own God, our Savior, and our Lord who has delivered us from sin. And we must realize here that God is always with us and helps us all the time while we are carrying on with our lives in this world. He walks with us and works with us. Whenever we have no strength to carry out His work, the Lord works with us and helps us so that we would accomplish this work. The God in whom we the born-again believe is the God of the living. He is the God who abides with us. This God works together with the born-again and helps them in every step of the way. Do you believe in this Truth?