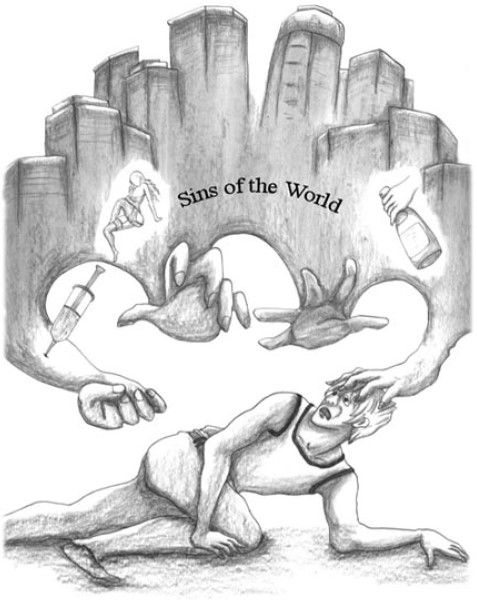 (Mark 13:1-27)
“Then as He went out of the temple, one of His disciples said to Him, ‘Teacher, see what manner of stones and what buildings are here!’ And Jesus answered and said to him, ‘Do you see these great buildings? Not one stone shall be left upon another that shall not be thrown down.’ Now as He sat on the Mount of Olives opposite the temple, Peter, James, John, and Andrew asked Him privately, ‘Tell us, when will these things be? And what will be the sign when all these things will be fulfilled?’ And Jesus, answering them, began to say: ‘Take heed that no one deceives you. For many will come in My name, saying, ‘I am He,’ and will deceive many. But when you hear of wars and rumors of wars, do not be troubled; for such things must happen, but the end is not yet. For nation will rise against nation, and kingdom against kingdom. And there will be earthquakes in various places, and there will be famines and troubles. These are the beginnings of sorrows. But watch out for yourselves, for they will deliver you up to councils, and you will be beaten in the synagogues. You will be brought before rulers and kings for My sake, for a testimony to them. And the gospel must first be preached to all the nations. But when they arrest you and deliver you up, do not worry beforehand, or premeditate what you will speak. But whatever is given you in that hour, speak that; for it is not you who speak, but the Holy Spirit. Now brother will betray brother to death, and a father his child; and children will rise up against parents and cause them to be put to death. And you will be hated by all for My name’s sake. But he who endures to the end shall be saved. So when you see the ‘abomination of desolation,’ spoken of by Daniel the prophet, standing where it ought not (let the reader understand), then let those who are in Judea flee to the mountains. Let him who is on the housetop not go down into the house, nor enter to take anything out of his house. And let him who is in the field not go back to get his clothes. But woe to those who are pregnant and to those who are nursing babies in those days! And pray that your flight may not be in winter. For in those days there will be tribulation, such as has not been since the beginning of the creation which God created until this time, nor ever shall be. And unless the Lord had shortened those days, no flesh would be saved; but for the elect’s sake, whom He chose, He shortened the days. Then if anyone says to you, ‘Look, here is the Christ!’ or, ‘Look, He is there!’ do not believe it. For false Christ’s and false prophets will rise and show signs and wonders to deceive, if possible, even the elect. But take heed; see, I have told you all things beforehand. But in those days, after that tribulation, the sun will be darkened, and the moon will not give its light; the stars of heaven will fall, and the powers in the heavens will be shaken. Then they will see the Son of Man coming in the clouds with great power and glory. And then He will send His angels, and gather together His elect from the four winds, from the farthest part of earth to the farthest part of heaven.’”

What Kind of Age Is This Present Age?

We just read Mark 13:1-17 for today’s Scripture reading. Here the Lord is explaining how this world would fall in the end times, what would happen to those who have received the remission of their sins at the end of the world, and what we should watch out for when this time arrives. Let us then examine the Word of God step by step, and then reach a detailed understanding of the truth about what the Lord is telling us.
When Jesus left the Temple of Jerusalem, one of His disciples said to Him, “Teacher, see what manner of stones and what buildings are here!” This passage implies that the disciples of Jesus had so much pride in the outside appearance of the Temple of Jerusalem that they were doubtful the Temple would fall in the end times. This is quite understandable, as the Temple of Jerusalem, built by King Herod to placate the people of Israel, was indeed a massive building. The palaces that we see nowadays are rather small when compared to the Temple of Jerusalem; built with gigantic marble stones, it was a towering structure. So it was natural for the disciples to feel quite proud of the Temple. But when the disciple’s spoke about this Temple with a great deal of pride, Jesus answered them, “Do you see these great buildings? Not one stone shall be left upon another that shall not be thrown down.”

What Did Jesus Say Would Fall?

How would we have reacted if we were at this scene with the disciples and heard the Lord saying that the Temple would fall? We would have asked in astonishment, “Are You saying that this Temple would fall?” But the Lord was not just speaking of the Temple. Rather, what He was saying is that one day He would destroy the whole world and everything on this earth. Being too busy with our present lives, we sometimes may not take the Lord’s Word seriously, thinking that there is too much of a time gap for His Word to have much relevance to us. But think about it more carefully. When our Lord spoke to the disciples, He was actually speaking to us explaining what would happen to this world, even though we are born nearly 2,000 years later since then.
With the changing of time, what is usually accepted as common sense also changes according to the prevailing wind, but the Words of the Lord never changes, for He is actually God. When the Lord said that the Temple of Jerusalem would collapse completely with no stone left on another, He knew that this world would also be destroyed. And He left His teachings on record so that we would know what would happen in the end times, how we should conduct ourselves in those days, and what kind of faith we should have when this happens. Although I am sure that you know it all, this passage once again reminds us that the Lord is indeed God.
After Jesus said, “Not one stone shall be left upon another that shall not be thrown down.” He sat on the Mount of Olive looking across from the Temple. Then some of His disciples namely, Peter, James, John and Andrew asked Him quietly, “Tell us, when will these things be? And what will be the sign when all these things will be fulfilled?” What the Lord told them was too profound for these disciples to comprehend. They could not comprehend just how this gorgeous and huge Temple of Jerusalem could be completely destroyed even if the whole of Israel were invaded by some foreign country, unless something more extreme were to happen. So they asked Jesus quietly when such things would happen.
When you get a terrible shock, words don’t come by so easily. You are too astonished to react loudly, and so you speak slowly and quietly, trying to grasp for words. This is particularly true when it comes to something that’s dear to you. Like this, the disciples were so astonished that they asked Jesus quietly, and He said to them, “For many will come in My name, saying, ‘I am He,’ and will deceive many. But when you hear of wars and rumors of wars, do not be troubled; for such things must happen, but the end is not yet. For nation will rise against nation, and kingdom against kingdom. And there will be earthquakes in various places, and there will be famines and troubles. These are the beginnings of sorrows” (Mark 13:6-8).
All the disciples of Jesus had asked Him was when and how the Temple of Jerusalem would fall, but Jesus spoke of this event with the fall of the world. Of course, Herod’s Temple was completely destroyed exactly as the Lord had said. After Jesus’ death on the Cross, in 70AD, a Roman general named Titus led his army into the Temple and destroyed it completely. Not only did he leave no stone on top of another, but he also massacred a countless number of people and sold the rest into slavery. The Temple was completely demolished to its very foundations. That’s why even now it’s still hard to ascertain the exact site of the Temple of Jerusalem. Archeologists can only estimate its rough location, and even this is anyone’s guess. Until extensive excavation is done to find solid evidence, no one can be sure of the exact location of the Temple.
But our Lord was not just speaking of the destruction of the Temple of Jerusalem. Along with this He also taught us about the last day of this earth. Since the Lord is God Himself, He wanted to let us know what would happen in the end times. He wanted to tell His children and His people about the end times. If you were to consider what the Lord said here in today’s Scripture passage in a literal sense, then it will bring no benefit to you. We need to have a clear understanding of the truth the Lord is trying to tell us, and through this truth we need to find out just how we ought to conduct ourselves in the present time and in the future. In other words, from the Word of God we must know the trials that are awaiting us in the future, and how we should conduct ourselves and what kind of faith we should have to confront these trials.

The Lord Spoke in Detail about the Coming Days of Tribulations

In Today’s Scripture Passage, What Did Our Lord Say Must Happen First Prior to Such Disasters?