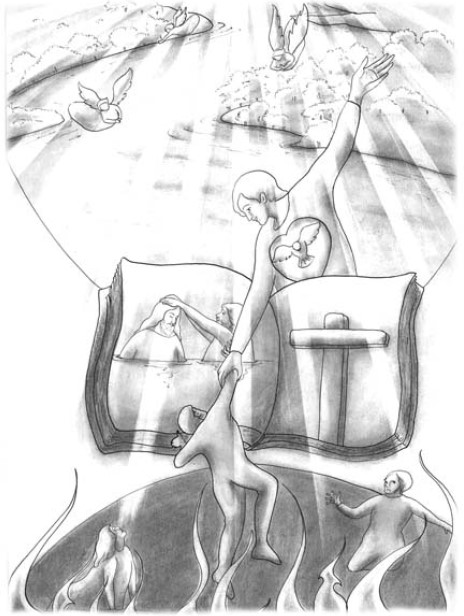 (Mark 14:3-9)
“And being in Bethany at the house of Simon the leper, as He sat at the table, a woman came having an alabaster flask of very costly oil of spikenard. Then she broke the flask and poured it on His head. But there were some who were indignant among themselves, and said, ‘Why was this fragrant oil wasted? For it might have been sold for more than three hundred denarii and given to the poor.’ And they criticized her sharply. But Jesus said, ‘Let her alone. Why do you trouble her? She has done a good work for Me. For you have the poor with you always, and whenever you wish you may do them good; but Me you do not have always. She has done what she could. She has come beforehand to anoint My body for burial. Assuredly, I say to you, wherever this gospel is preached in the whole world, what this woman has done will also be told as a memorial to her.’”

The righteous saints who are born of the Holy Spirit are called to serve the Lord by holding onto the gospel. Needless to say it twice, it is natural for all the saints to do so.
Today’s Scripture passage talks about a woman who poured costly fragrant oil on Jesus. Based on today’s passage, we can see that Jesus cherished and admired this kind of act no matter whether she poured her oil on Jesus’ head or His feet. This account is recorded in all the Four Gospels. When we look at the Gospel of John or the Gospel of Luke, we can encounter the story of a sinful woman who poured her expensive oil on Jesus’ feet wetting them with tears and washing His feet with her hair.
She did this out of gratitude for the remission of her sins that the Lord had given, and this pouring of oil was to prepare for His burial. At that moment a Pharisee who invited Jesus thought to himself, “This Man, if He were a prophet, would know who and what manner of woman this is who is touching Him, for she is a sinner” (Luke 7:39). The woman was that much of a sinner. In other words, she was such a well-known sinner in that town. Nevertheless, Jesus said this to them, “I entered your home; you gave Me no water for My feet, but she has washed My feet with her tears and wiped them with the hair. She by doing this has prepared My burial beforehand and is serving the gospel.” He added, “Those who received the remission of their sins will do the same as she has done, but those who do not receive the remission of sins will reject Me. But those who deny their sins will not accept Me.”
This event in today’s passage occurred when Jesus was eating at the house of Simon the leper in Bethany. A woman came having an alabaster flask of very costly oil of spikenard. (Note: the Bible is not referring to a specific named woman, but it says just ‘a woman’). Then she broke the flask and poured it on His head. Using this as an opportunity, the Pharisees tried to pick a fight with Jesus.
Does the passage not say, “A woman came having an alabaster flask of very costly oil of spikenard? Then she broke the flask and poured it on His head”? One flask of pure spikenard was very expensive. One flask of spikenard was worth 300 days’ wages done by healthy and strong young men. What do you think happened when she broke the alabaster jar of such costly oil? Would the fragrant oil not run all over Him? It is not hard to imagine this scene, “Oh my goodness! What a waste! Such costly oil is now gone only wetting His head once. One year’s salary of a healthy man has just been wasted.”
But this is a mistaken idea. Our Lord is telling us that it is wrong to think that the money spent for doing things invisibly such as spreading the gospel, worshiping Jesus and helping people receive the remission of their sins is not as wisely spent as money spent for enhancing the body, helping the poor, or curing diseases. The Lord told His disciples to commemorate what she has done, saying, “Wherever this gospel is preached in the whole world, what this woman has done will also be told as a memorial to her.”
In Middle Eastern countries including Israel where the quality of water is poor, fragrant oil is a very expensive item. This is because perfume is necessary for people to use on the body to hide odor in these places where there is not enough water and having a poor quality of life. Historians say that the original spikenard oil was extracted from aromatic trees in the Himalayan Mountains, and because it was so rare, it always had been extremely costly. The point is a woman poured that type of expensive oil on Jesus’ head. When the alabaster flask was broken and she poured it all out at once, such costly oil worth a year’s wage all disappeared. Those there who were watching this thought it was a huge waste and commented, “Why was this fragrant oil wasted? For it might have been sold for more than three hundred denarii and given to the poor.”
As I mentioned earlier, one denarius was a man’s daily wage. To calculate what she had done for better understanding, three hundred denarii is the amount a man would have earned after three hundred days’ of hard labor without spending it on expenses. People probably considered her act wasteful. They thought it would be better and more meaningful if she had not poured that fragrant oil on Jesus’ head, but had instead sold it and had given the money to the poor. Even though people were judgmental, Jesus did not regard her act of service as a meaningless waste. Jesus said what she did was good and He praised her for preparing His death and burial. And He then commanded His disciples to commemorate her deed wherever the gospel is preached.

What Does It Mean to Serve the Lord?

What Is Proper Service?