[Chapter 1-10] We Must Know and Believe in Jesus’ Righteousness Correctly Through the Word of God (Luke 1:39-55) 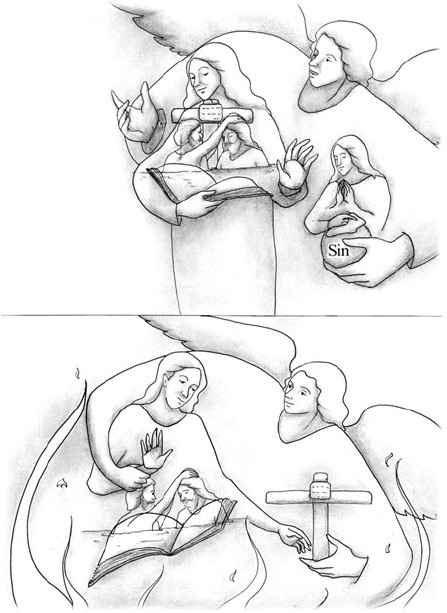 (Luke 1:39-55)
“Now Mary arose in those days and went into the hill country with haste, to a city of Judah, and entered the house of Zacharias and greeted Elizabeth. And it happened, when Elizabeth heard the greeting of Mary, that the babe leaped in her womb; and Elizabeth was filled with the Holy Spirit. Then she spoke out with a loud voice and said, ‘Blessed are you among women, and blessed is the fruit of your womb! But why is this granted to me, that the mother of my Lord should come to me? For indeed, as soon as the voice of your greeting sounded in my ears, the babe leaped in my womb for joy. Blessed is she who believed, for there will be a fulfillment of those things which were told her from the Lord.’ And Mary said:
‘My soul magnifies the Lord,
And my spirit has rejoiced in God my Savior.
For He has regarded the lowly state of His maidservant;
For behold, henceforth all generations will call me blessed.
For He who is mighty has done great things for me,
And holy is His name.
And His mercy is on those who fear Him
From generation to generation.
He has shown strength with His arm;
He has scattered the proud in the imagination of their hearts.
He has put down the mighty from their thrones,
And exalted the lowly.
He has filled the hungry with good things,
And the rich He has sent away empty.
He has helped His servant Israel,
In remembrance of His mercy,
As He spoke to our fathers,
To Abraham and to his seed forever.’”

What Relationship Is There between Mary and Jesus’ Birth?

Jesus Christ was born on this earth through Mary, and the Bible said that He scattered the proud in the imagination of their hearts. In other words, Jesus Christ, the Son of God, came to this earth as the Savior, showed His power, and scattered those who are proud in the imagination of their hearts. God scatters those who are proud before Him. He sends them to Sheol; that is, to hell. The Bible says He has put down the mighty from their thrones.
My fellow believers, who can be said to be mightier than the Lord? There is no one. There is no one in this world higher than the Lord. “He has exalted the lowly, filled the hungry with good things, and the rich He has sent away empty” (Luke 1:52-53). All these things happened in this world because the Lord came. He exalted the lowly, made them God’s children, but He scattered those who were proud in the imaginations of their hearts. He put down the mighty from their thrones by smashing them to pieces with an iron hammer; He filled the hungry with good things, and sent the rich away empty.
Alexander the Great was called a great king because he had done many great achievements. However, when he died, he said, “Even though I have taken possession of many countries and lived as the king of this empire, my time to die has come. Make holes in both sides of my coffin and place my arms through the holes, and show this to the people. I have possessed and taken this world so much that I have received the appellation of “the Great,” but I am dying with nothing.” So, it’s said that Alexander’s arms flopped around outside of the coffin when it was brought out at his funeral. He wanted to show to others that he who had conquered such a vast territory, was called great, and had enjoyed a lot of power left empty-handed when he died.
My fellow believers, all of these things are realized when the Lord came to this earth. If He had not come, the rich would remain rich, those who were proud in the imagination of their hearts would be proud even as they go to hell. The lowly would remain lowly, and those who hungered and thirsted would remain miserable forever. But the Lord came and rejected the proud, exalted the poor, and filled the hungry by His power. In other words, people who believe in the grace of salvation, that is the gospel of the remission of sins, receive these amazing blessings before the Lord. Only the Lord did these things. These events happened on this earth by Jesus Christ coming to this earth through Mary. The Lord did these things out of His own power.

Mary Said That the Lord Regarded the Lowly

Mary praised the Lord saying, “My soul magnifies the Lord, and my spirit has rejoiced in God my Savior. For He has regarded the lowly state of His maidservant; for behold, henceforth all generations will call me blessed.” It was the confession of her faith. My fellow believers, we have the same kind of faith as Mary. The confession of yours as well as mine is the same as Mary’s. Your souls and mine magnify the Lord, and your spirit and mine rejoice in Him. We rejoice because of Him. The Lord regarded our lowliness and made us into the children of God. You and I were really lowly people, but the Lord exalted us. Just as Mary acknowledged before the Lord that she was a lowly maidservant, every one of us who has met the Lord was by nature a lowly one.
We originally had no joy and we absolutely had no goal to live for. We had no answer for the question of what life is. We were such lowly people. We were lowly people who lived with no purpose and just lived because we were born, ate in order to live, and lived in order to eat. But the Lord blessed us by meeting us who were so lowly. The Bible said, “And holy is His name. And His mercy is on those who fear Him from generation to generation” (Luke 1:49-50). This passage means that the Lord gave eternal salvation to those who acknowledge God and His Word, believe in and fear His Word, and accept it as it is. People are regarded with pity and saved by God from generation to generation if they are humble people who obey whatever is the Word of God without asking for reasons like Mary who said, “Behold the maidservant of the Lord! Let it be to me according to your word” (Luke 1:38). God saved those kinds of people.
Mary said, “He has shown strength with His arm; He has scattered the proud in the imagination of their hearts. He has put down the mighty from their thrones” (Luke 1:51-52). The Lord put down the proud before God. The rich and those who believe in the power of this world are put down and go to hell. The proud who, like men of power, only depend on the power of the world and do not obey God ultimately go to hell.
We must think about what it is that God has said. We must give ear to the Word of God and we must obey the Word when the Scriptures say so. The Lord says, “The wages of sin is death” (Romans 6:23) and that a person will be judged and go to hell if they have sins. Those who acknowledge these Words will be saved before God. Romans 6:23 continues, “The gift of God is eternal life in Christ Jesus our Lord.” We are people who truly cannot help but go to hell. But we believe in the fact that we come to be saved and obtain eternal life if we believe in the gospel of the water and the Spirit and the Word of the Truth. We are saved if the Lord said that He saved us through the gospel of the water and the Spirit, the Word of the Truth. We are saved if the Lord says He saved us, but we cannot be saved no matter how hard we try if He says He didn’t save us. My fellow believers, people who acknowledge God and His Word are saved out of His mercy, but those who do not acknowledge Him are put down from His grace.