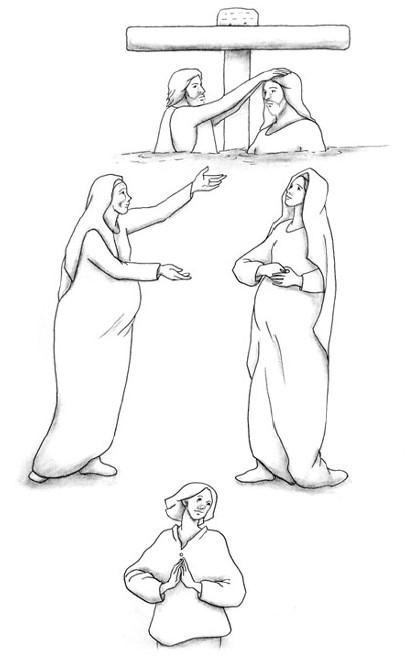 (Luke 2:1-14)
“And it came to pass in those days that a decree went out from Caesar Augustus that all the world should be registered. This census first took place while Quirinius was governing Syria. So all went to be registered, everyone to his own city. Joseph also went up from Galilee, out of the city of Nazareth, into Judea, to the city of David, which is called Bethlehem, because he was of the house and lineage of David, to be registered with Mary, his betrothed wife, who was with child. So it was, that while they were there, the days were completed for her to be delivered. And she brought forth her firstborn Son, and wrapped Him in swaddling cloths, and laid Him in a manger, because there was no room for them in the inn. Now there were in the same country shepherds living out in the fields, keeping watch over their flock by night. And behold, an angel of the Lord stood before them, and the glory of the Lord shone around them, and they were greatly afraid. Then the angel said to them, ‘Do not be afraid, for behold, I bring you good tidings of great joy which will be to all people. For there is born to you this day in the city of David a Savior, who is Christ the Lord. And this will be the sign to you: You will find a Babe wrapped in swaddling cloths, lying in a manger.’ And suddenly there was with the angel a multitude of the heavenly host praising God and saying: ‘Glory to God in the highest, And on earth peace, goodwill toward men!’”

The Savior Coming to This World Is the Greatest News

It has been over 2000 years since Jesus came to this world. The dating mechanism of year of the world that we use is based on the birth of Jesus Christ in this world. So the historians have divided it into Before Christ (B.C.) and Anno Domini (A.D., the year of the Lord), and it has now been over 2000 years since the birth of Jesus.
There was no vacancy in the inn of Bethlehem when our Lord came to this world. Simply put, He was born in a stable of animals where livestock ate and slept. He lay in a feeding trough of an animal, a manger, wrapped in a rough swaddling cloth. Our Lord the Savior was born in such a shabby place. The Scriptures say, “And she brought forth her firstborn Son, and wrapped Him in swaddling cloths, and laid Him in a manger, because there was no room for them in the inn.”
Our Lord came to this world to save lowly human beings who were cast out from the Garden of Eden because of sin. At the time when our Lord came to this world to save lowly humans, an astonishing thing was unfolding in a small village of Bethlehem and its nearby field. Shepherds were tending their sheep in the region of Bethlehem during a pitch-dark night when they heard the angels speak. The Scriptures say, “And behold, an angel of the Lord stood before them, and the glory of the Lord shone around them, and they were greatly afraid. Then the angel said to them, ‘Do not be afraid, for behold, I bring you good tidings of great joy which will be to all people.’”
What is the most joyful news in the world? The most joyful news for humans is that Jesus Christ the Savior came to this world. Put differently, the most joyful news for you and me is that our God came personally in human flesh to save lowly human beings, including you and me, from sins of the world. This is the biggest news in this earth. That God became a human and came to us is the biggest event and the most joyful news. How could there be news greater and more joyful than this? Would it be more joyful to hear that the president of the United States comes to our country, Korea? The whole country would be in commotion to greet him; but who is He that is greater than anyone in the world? God the Creator who created the whole universe as well as us human beings is the greatest. That great God came to this world. That God came to this world in order to save Adam’s descendants who were living a pitiful life because Adam and Eve, our common ancestors, were cast out from the Garden of Eden after they had sinned is the most joyful news in this world.
Our Lord came to this world like that. Who is the Savior of all humanity? Who is the One who lifted us out of the sins of the world by giving us the faith of salvation and made us happy? Who is the true Savior for humans who should have received destruction and curse because of the sins of humanity? He is Jesus Christ who shall take all the sins of all humanity by receiving the baptism. There is a meaning in the name Jesus Christ: Jesus means the Savior of the humanity and Christ means the one anointed with oil. This Jesus became the Savior for us humanity.
Jesus is the King of kings. He is the King of kings, God among gods, and the Creator that created the universe and everything in it. There are many gods in the world, but only Jesus who came as our Savior is the only true God. Christ means the one who has been anointed with oil and it means He is the King. It means the Savior and the Prophet who teaches us properly. Therefore, the One who is the true Savior of our life is Jesus Christ who is the King of kings.

It Is the Most Joyful News for All the People

“On Earth Peace, Goodwill toward Men!”