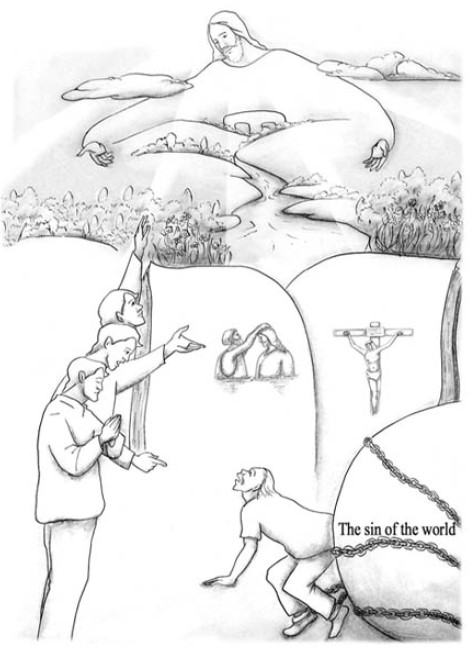 I Was a Legalist

What Is the Biblical Meaning of the Color Blue?

It refers to the baptism Jesus received on this earth, through which He bore our sins once and for all. Jesus accepted all our sins by being baptized. What does the color purple mean? It means that Jesus is the King of kings, God Himself, and our Divine Being. What about the color scarlet then? It refers to the sacrifice that Jesus Christ made by shedding His blood to death on the Cross to pay off the wages of our sins that He had accepted through His baptism. The color scarlet implies that Jesus bore the condemnation of our sins. So, Jesus has completely blotted out all our sins with the blue, purple, and scarlet thread, and this Truth is revealed in His Word that was recorded in detail just like the fine woven linen. We have finally become sinless and righteous people by believing in the Truth revealed in the screen gate of the Tabernacle. We have become God’s own children, in other words. That’s how we are now able to enter the Kingdom of God.
My fellow believers, if you want to become righteous, you must believe in the blue, purple, and scarlet thread. The Son of God the Father and God Himself, the Creator who made the universe and all things in it, personally came to this earth to save you and me, received baptism, died on the Cross, rose from the dead again, and has thereby delivered us all. In doing so, the Lord has washed our hearts as white as snow and made us His brides. In other words, He has accepted us as His own people.
Unless you believe in this Word, you cannot enter the House of God. Anyone can open and enter the gate of the court of the Tabernacle. Even a sinner can enter the court of the Tabernacle. A sinner can also bring a sacrificial lamb or goat and make his way through the gate. He may even lay his hands on his sacrificial animal there. Even if he doesn’t believe, he can still lay his hands on the lamb of sacrifice, cut its throat, draw its blood, give it to the priests, and then go home. He may even sneak up to the laver of bronze behind the priests’ back and wash his dirty hands and face with its water. The priests may then find out and chase after him. But even so, he can still claim, “Today, I received the remission of sins.”
However, my fellow believers, anyone who does not believe with the heart can never enter into the Holy Place. The Holy Place is different from the court of the Tabernacle. Those who are faithless and therefore remain sinful absolutely cannot enter into the Holy Place. The Bible says that the wages of sin is death, but the gift of God is eternal life in Christ Jesus our Lord (Romans 6:23). You can enter the Holy Place only if you believe in the Word of God and His rules. Only those who believe with the heart can enter it. The Bible says that with the heart one believes unto righteousness, and with the mouth confession is made unto salvation. Only if you believe with your heart can you enter Heaven and become a child of God. Those who don’t believe can never enter Heaven.
The door of the Holy Place was also made of blue, purple, and scarlet thread and fine woven linen. This means that we must believe in the God-fulfilled salvation with our hearts. We must confirm it again to enter the Holy Place. We must believe that our Savior, God Himself, came to this earth, was baptized, and bore our sins through this baptism, and that Jesus is the God who created us. We must also believe that Jesus bore the harsh punishment for all our sins on the Cross precisely because He had shouldered them through His baptism. And rising from the dead again, He has become our Savior and made us God’s children.
Are we then still sinful, my fellow believers? No, we have become as clean as white snow. Such faith is the faith that believes the Truth revealed in the blue, purple, and scarlet thread and fine woven linen. This is the very faith that enables us to open the door of the Holy Place and enter it, and only those who have such faith can enter the Kingdom of God.

What Is inside the Most Holy When You Enter It?