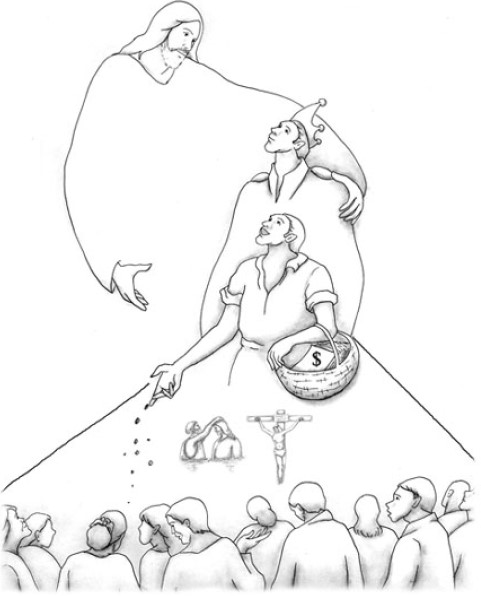 Who Finds the Grace of God?

Those who are physically and spiritually pitiful are the ones who find the grace of God. They are so wretched that God cannot help but grant His Love. It’s on these people that God bestows His mercy. God’s love and mercy are granted to those who are extremely miserable. God grants His love benevolently and graciously to the wretched ones who deserve His mercy. The true benevolence that God has shown to us is manifested in this way to the wretched sinners through the gospel of water and the Spirit. Let us then take this opportunity to learn in more detail about to whom Lord really shows His mercy.
In today’s Scripture passage, Jesus told a parable to a certain lawyer, or a mentor of the Law: “A certain man went down from Jerusalem to Jericho, and fell among thieves, who stripped him of his clothing, wounded him, and departed, leaving him half dead. Now by chance a certain priest came down that road. And when he saw him, he passed by on the other side. Likewise a Levite, when he arrived at the place, came and looked, and passed by on the other side. But a certain Samaritan, as he journeyed, came where he was. And when he saw him, he had compassion. So he went to him and bandaged his wounds, pouring on oil and wine; and he set him on his own animal, brought him to an inn, and took care of him.”
At first the lawyer had approached Jesus and asked, “Teacher, what shall I do to inherit eternal life?” Jesus had then asked him in return, “What is written in the law? What is your reading of it?” And the lawyer said, “You shall love the Lord your God with all your heart, with all your soul, with all your strength, and with all your mind, and your neighbor as yourself. Jesus then said to him, “You have answered rightly; do this and you will live,” but the lawyer, wanting to justify himself, said to Jesus, “And who is my neighbor?” The lawyer asked this question to justify himself and challenge Jesus.
Jesus then spoke figuratively about a man who fell among thieves on his way to Samaria from Jerusalem, and how this traveler was rescued by a benevolent Samaritan. We have heard this passage so many times that we think we know all about it. I suspect that because you are so familiar with this passage, some of you might not have paid much attention. But rather than just glossing it over thinking that we already know it all, we should recollect and ruminate on God’s blessings found in this passage and make it our spiritual bread.
The mentor of the Law here approached Jesus and tried to show off his observance of the Law. Brimming-over with self-confidence and full of conceit, he challenged Jesus saying, “I have followed all the commandments of God and I have loved my neighbors so far, so who’s my true neighbor? I will treat him as God commands, so who should be my neighbor? If You tell me who my neighbor is, I will love him like I love myself.”
Fundamentally, however, this lawyer was not a righteous man who could observe God’s Law. That’s because everyone is born with sinful nature and all the ingredients of sin. But the lawyer, being ignorant of the truth, had misjudged himself, thinking that he himself was capable of completely observing God’s Law. In other words, the lawyer didn’t know his ability. He was overconfident of himself. So he challenged Jesus’ righteousness, saying, “Who’s my neighbor? I’ll show that I love my neighbor just like I love my own flesh. By doing so, I’ll gain eternal life.” So Jesus exposed this lawyer’s conceit through a parable, explaining to him, “You’re absolutely not capable of observing the Law and will always remain so.”
The first city Jesus mentioned in His parable is Jerusalem. Jerusalem is the city of peace. It is the city of religion. During the days of Jesus, Jerusalem was Israel’s capital city as well as the largest city of the region. The name “Jerusalem” means “teaching of peace.” Jesus specifically mentioned Jerusalem in His parable to call the lawyer’s attention to his real nature.
In the parable, a certain man went down toward Jericho from Jerusalem. All geographical names and people’s names written in the Bible have a certain meaning. The city called “Jericho” means “fragrant”—that is, the city implies this world. This will become clearer down the road toward the end of my sermon.
When Jesus explained His teachings, He often spoke figuratively. What did Jesus then mean when He said that a certain man fell among thieves while traveling to Jericho from Jerusalem? This points out the fact that that lawyer was from Jerusalem, and that he was a religious man, a leader of the Jewish religion. And Jesus used this simile to teach us that such a religious person was prone to be corrupted and fall into the world after leading a long religious life.

But Who’s My Neighbor?

What Did This Samaritan Do to the Man Who Fell among Thieves?

When the Samaritan saw the victim, he felt pity for him. Having compassion on someone is benevolence. If left alone, we all are destined to go to hell. No matter how hard we try to live by God’s will, we can’t do it. We are incapable of following the will of God to perfection. We’re feeble men. We are such miserable beings in God’s eyes. That’s why the Almighty God takes pity on us. Human beings might point a finger at each other’s failure, but God Almighty, who is the God of love, the God of the Truth, and the Savior, takes pity on us humans. The Good Samaritan took pity on the dying man, approached him and anointed him. This symbolizes that Jesus came down to this world in the flesh of man, and saved all people with His baptism and blood. He took pity on all humankind and saved it.
Most Jews did not respect Jesus. Only a few people who followed Jesus closely recognized and respected Him. Jesus did not have anything to be admired in His outside appearance. Far from admiring, the Jews actually despised Jesus. Our Lord had been always scorned since He came to this world born in lowly status. But despite being scorned by the people of this world, it was Jesus who had saved all of mankind, just as it was the lowly Samaritan who rescued the dying man. God had become a lowly Man to save us humans. The Creator of the universe came to this world in the flesh of man, as it is written, “And the Word became flesh and dwelt among us, and we beheld His glory, the glory as of the only begotten of the Father, full of grace and truth” (John 1:14).
What did Jesus, our God, do for us when He came to this world? Just as the Israelites’ sins were passed onto the sacrificial lamb by laying their hands on its head in the Old Testament, Jesus bore all the sins of mankind and blotted them out by being baptized by John the Baptist at the age of 30.

The Gospel of the Righteousness of God Has Saved Us

John the Baptist Is the Representative of All Mankind

Among those born of women John the Baptist was the greatest man. As is written in Matthew 11:11, Jesus Himself bore witness of John, saying, “Assuredly, I say to you, among those born of women there has not risen one greater than John the Baptist.” Jesus said this because John the Baptist had passed all the sins of mankind to Jesus as the representative of all humankind. The moment Jesus was baptized, He took all the sins of mankind onto Himself and blotted them out. As Jesus began His public life at the age of 30, He was baptized first and accepted all the sins of mankind passed onto His head. And He proclaimed for three years that He was the Light of this world and the Savior. When Jesus died on the Cross, He cried out, “It is finished!”
It is by being baptized by John the Baptist, and thereby taking upon all the sins of the world, that Jesus Christ cleansed away each and every sin in this world. “Thus”—that is, by being baptized, Jesus accepted all the sins of this world passed onto Him and bore the judgment of blood on the Cross on behalf of us sinners. In this way, He delivered all of us believers from all our sins. This is the purpose of the baptism Jesus received. Do you believe this? When Jesus said to John the Baptist, “Permit it to be so now, for thus it is fitting for us to fulfill all righteousness,” He was saying, “John, baptize Me to pass all the sins of mankind to Me. I will bear all the sins of mankind on My body.” In this way, Jesus eradicated all the sins of this world.
Just like the sacrificial sheep or goat without blemish in the Old Testament, Jesus gave His body for us mankind by being baptized and by bleeding on the Cross. Jesus was baptized for all sinners. God the Father praised Jesus who obeyed and carried out this mission. It is written, “When He had been baptized, Jesus came up immediately from the water; and behold, the heavens were opened to Him, and He saw the Spirit of God descending like a dove and alighting upon Him. And suddenly a voice came from heaven, saying, ‘This is My beloved Son, in whom I am well pleased’” (Matthew 3:16-17). God the Father was saying here, “With His baptism, My Son obeyed Me and carried out My order to bear all the sins of this world.” God the Father Himself bore witness of this Truth. It is then only a matter of course for us to believe that the Lord has saved us from all our sins. We should also believe that Jesus bore all your sins and mine by being baptized when He came to this earth. All of us must be delivered by this faith.

“Behold! The Lamb of God Who Takes Away the Sin of the World!”

Then What Must We Believe to Be Delivered from All Our Sins?